It’s the 50th anniversary of the famous Woodstock festival, which was fraught with controversy before it even happened.

This August marks the fiftieth anniversary of the Woodstock Festival, the rock concert that epitomized a generation. To celebrate, a Woodstock 50 concert had been scheduled for Watkins Glen, New York. It was cancelled by its investors in late April. Organizers vowed to carry on… echoing the last-minute nature of the original event.

Woodstock: An Aquarian Exposition (August 15-18, 1969) almost never happened, because several New York towns were dead set against it due to worries about traffic and sanitation mixed with a moral panic about sex, pot, and dirty hippies.

“Woodstock,” after all, didn’t end up taking place in the town of Woodstock. As historian Ronald Helfrich explains, the festival’s organizing entity, Woodstock Ventures, took its name from a town already on the rock and roll map as a hangout for Bob Dylan, Janis Joplin, the Band, and members of Blood, Sweat & Tears. For Woodstock Ventures, the location was obvious. But when presented with the possibility of a rock music concert for tens of thousands, Woodstock’s civic leaders quickly implemented health, safety, and traffic regulations that precluded any chance of the festival taking place within its bounds.

Many residents were pleasantly surprised by their first encounters with hippies, exotic creatures they’d only heard about in the news.

Similar responses came from the towns of Saugerties and Wallkill, where petitions, lawyers, and instantly-passed zoning regulations put teeth into the rejections.

Not everyone in the region was against the music festival, however. Residents, politicians, and business leaders were split. Both the Bethel Business Association and Catskill Resort Association, for instance, thought a music festival would be great for tourism.

And so, in late July of 1969, the town and zoning boards of Bethel gave their approval for the event to be held in the hamlet of White Lake. Days later—just weeks before the scheduled start—a “heated meeting of the town board” challenged the permits. Max Yasgur, whose farm was to be the site of the festival, was boycotted by some of his neighbors. An injunction by opponents was taken out against Woodstock Ventures, but it was withdrawn on August 12th “when it became clear they could not win their suit.”

150,000 people were expected to show up for the advertised “three days of peace and music.” Many more went, perhaps as many as 750,000—more than a few were stuck in traffic and never made it. Concerns about that traffic and sanitation turned out to have been quite real:

Medical facilities were swamped. Pumps set up to extract water from the ground occasionally failed under the strain. Eventually, dairy trucks were acquired and used as water containers. Traffic congestion made it virtually impossible for the portable toilets to be emptied of their contents.

Concerns about the “moral degeneration” of sex, drugs, and rock and roll were perhaps less real. Helfrich notes that “the citizens of Sullivan County, the promoters, and the festival-goers generally responded to a difficult situation with compassion, kindness, good will, and even humor.”

Many residents were pleasantly surprised by their first encounters with hippies, exotic creatures they’d only heard about in the news. Others continued to be enraged: this was, after all, another front in the culture wars. The concert, writes Helfrich, left a “trail of political, economic, and cultural fallout in its wake” in the region long after the last amp was trucked out.

Afterwards, Bethel’s pro-festival supervisor Daniel Amatucci was voted out of office because of his role in the affair. Local clergy said never again. The county DA, an anti-Woodstocker, even called a grand jury to fish into the waters of criminal wrongdoing at the festival; but the jury found no evidence of crime and refused to issue any indictments. Local and state laws were written to make it much harder to stage such events without detailed groundwork and complicated permitting processes.

“All sides then saw the Woodstock Festival in moral terms,” concludes Helfrich. He notes that a 25th anniversary “Woodstock Remembered” exhibit at the Sullivan Country Historical Society bought up old wounds. “There are still those who are so opposed to the festival they cannot even talk about it.” But, “given the tendency of communities to romanticize their past (or who manufacture a past to romanticize),” Helfrich suggests that Woodstock will someday be memorialized without controversy.

"What Can a Hippie Contribute to our Community?" Culture Wars, Moral Panics, and The Woodstock Festival
By: Ronald Helfrich
New York History, Vol. 91, No. 3 (SUMMER 2010), pp. 221-244
Fenimore Art Museum 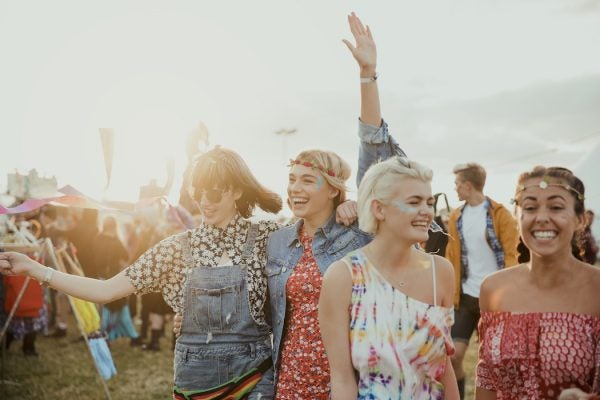 From Saturnalia to Coachella

Art, music, religious, and seasonal festivals have been a part of human life since prehistory. How have they changed as society has changed?