Dogs in the Trenches of World War I

While the history of pigeons and horses in the military is widely known, canines have gotten less attention. 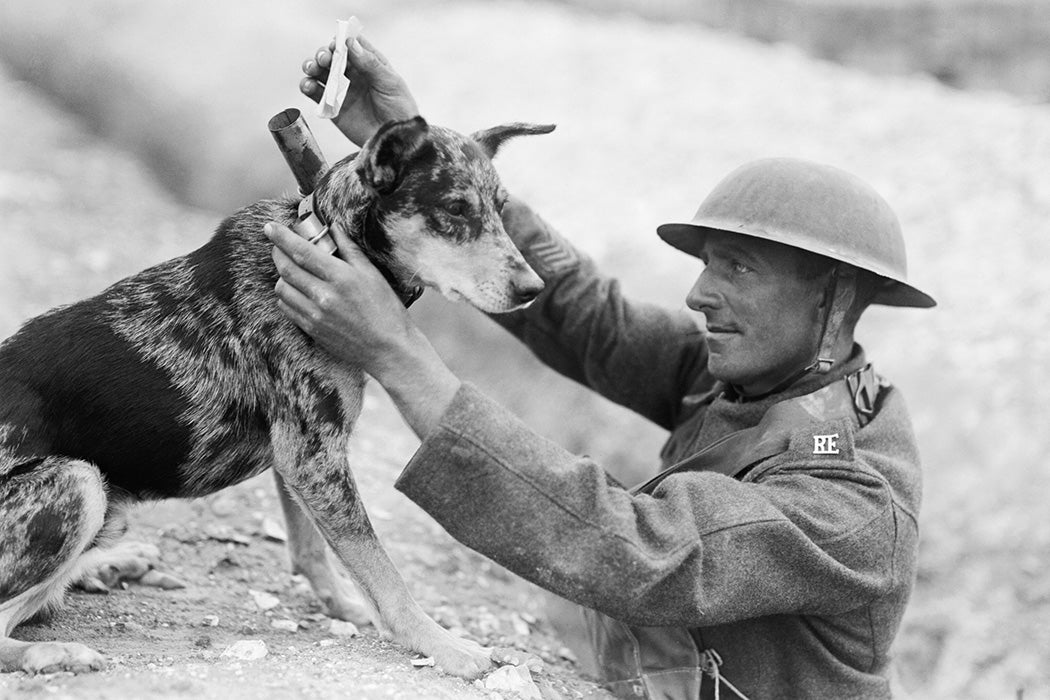 Sergeant of the Royal Engineers Signals Section putting a message into the cylinder attached to the collar of a messenger dog at Etaples, 28 August 1918
via Wikimedia Commons
By: Matthew Wills
3 minutes
Share Tweet Email Print

Dogs have long been employed for guarding and hunting, but it took industrialized warfare to militarize them. In the decades before the First World War, the European powers began to consider how to incorporate dogs into their militaries, as auxiliaries. Then, during the war, all that strategizing, training, and breeding met in the crucible of the trenches.

Animaux-soldats played multiple roles in the Great War of 1914–1918. But while the history of pigeons and horses in the military is widely known, dogs have gotten less attention. Historian Chris Pearson helps correct this gap.

One 1916 German publication estimated that 600 dogs saved over 3,000 lives in the grim zone between opposing forces.

“There were fewer dogs in the trenches, but they performed more varied roles than horses did due to their cognitive skills, physicality, and trainability,” Pearson writes. “Armies used them as guard dogs and messenger dogs, as well as deploying them to lay telegraph wires and locate injured soldiers in ‘no man’s land.’”

One 1916 German publication estimated that 600 dogs saved more than 3,000 lives in the grim zone between opposing forces. The Belgians, meanwhile, used dog carts to move weapons and supplies. After the United States started fighting in Europe in 1917, American bloodhounds were used to locate corpses and land mines. In addition to all these official roles, dogs were also kept as pets and ratters in the trenches by soldiers in all armies.

During the war, there was an increasing institutionalization of military dogs through training facilities and specialized units. The French Military Canine Service was formed in 1917; in that year and the next, France enlisted some 15,000 dogs. More than 5,000 of them died during the last two years of war.

Pearson writes that although dogs helped “sustain the trench system of combat,” they were neither automatons nor humanlike soldiers. “Dogs acted with a degree of purpose and intentionality in nonhuman ways, which their trainers and handlers mobilized in an attempt to support the war effort.”

Pearson’s larger argument is about agency—“the ability to think and act independently and follow free will.” He writes that agency, long presumed to be a strictly human characteristic, is actually “shared unevenly among humans and nonhumans.” The border between nonhuman and human is a porous one; in the case of these trench-war dogs, there was a mixture of both human and dog capabilities working together.

Dogs, after all, do seem to be capable of some “self-directed action” or intentionality—trainers trusted them to complete complicated, dangerous tasks under fire, when alternate routes back to safety, for instance, had to been sniffed out.

In the new animal history, according to Pearson, “conceptualizing animals as agents allows them to enter history as active beings rather than as static objects.”

Thousands of dogs were killed or injured during the war, including those rejected for military roles. One British trainer quoted by Pearson said, “I much regret to say that it was my experience to find occasionally the canine ‘conscientious objector’ among the recruits.” Unlike human conscientious objectors, dogs that didn’t “respond to British army training methods were destroyed.”

If war dogs are honored, then it seems only fitting that all dogs be as well.