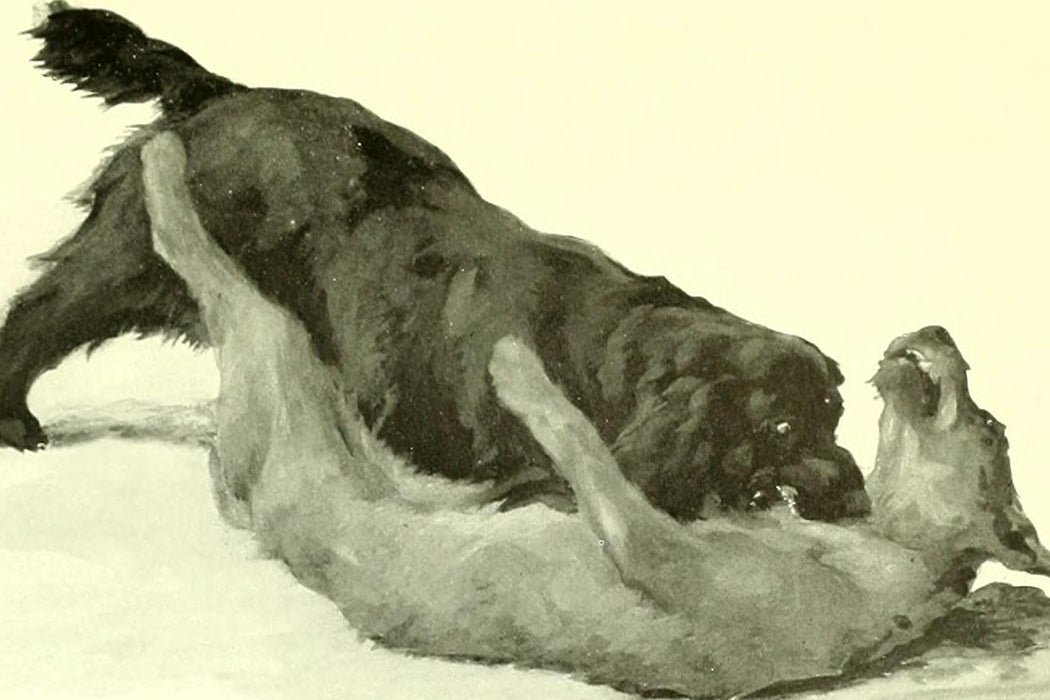 Dogs have always inspired a lot of debate in American cities. Today, we argue about poop-scooping and service dogs in public buildings. But, as historian Jessica Wang writes, in nineteenth-century New York City, the debate involved paying impoverished children to participate in dog-murder.

Dogs, both pets and strays, ran wild as well. In 1856, the New York Daily Times railed against unmuzzled dogs that “swarm in all the streets, obstruct the pavements, make night hideous with their howls, and have a worse name than Aldermen in New York.”

Efforts to rid the streets of dangerous dogs—particularly rabid ones—had begun early in the nineteenth century. The mayor’s office paid fifty-cent bounties for unmuzzled dogs turned in at police stations for disposal in July and August, which were supposedly the times when rabies was most prevalent. In 1850, the city made this more systematic, establishing a Dog Bureau that patrolled the streets and clubbed dogs to death if they appeared to pose a threat to public health. It also opened its first dog pound, sparing “valuable dogs” immediate execution and giving owners a chance to reclaim them.

A growing animal welfare movement pushed back against the city’s Dog Bureau.

But a growing animal welfare movement pushed back. Middle-class reformers identified affection toward animals with ideal family life and children’s moral development. To them, dog catching represented a semi-criminal underworld where street urchins learned cruelty and immorality. New York’s ASPCA, established in 1866, quickly went to war against the system.

Wang notes that early efforts to root out dog bounties backfired. Reformers succeeded in restricting payments to adults, but that created dog brokers, a handful of men who paid kids a fraction of the money and reaped a profit. Then, a new system of municipal dogcatchers ended up integrating the “Dog Ring” into the Tammany Hall patronage network. One man won an official dogcatcher appointment through blackmail—threatening to release sixty dogs, some showing symptoms of rabies, onto the streets. An alderman immediately telegraphed him to come to the mayor’s office since “the city cannot lose your valuable services.”

The continuing bounty system also encouraged dog theft—snatching pet dogs to claim the reward, or holding them for ransom.

In the 1890s, the ASPCA tried a new tack, successfully bidding to take over the dog-catching business itself. The state legislature granted the civic group the right to open a new facility, replacing the municipal pound, and to run a dog licensing system to fund its operation. With a new, disciplined approach to dog-catching, Wang writes, the professionals’ image shifted from virtual criminals to being seen as “at worst, colorful rogues.”

The decades that followed brought continuing power struggles between the city government and the ASPCA. But the civic group retained its basic authority over managing New York’s dogs, reflecting a new consensus supporting animal welfare in the twentieth century.

Dogs and the Making of the American State: Voluntary Association, State Power, and the Politics of Animal Control in New York City, 1850-1920
By: Jessica Wang
The Journal of American History, Vol. 98, No. 4 (March 2012), pp. 998-1024
Oxford University Press on behalf of Organization of American Historians