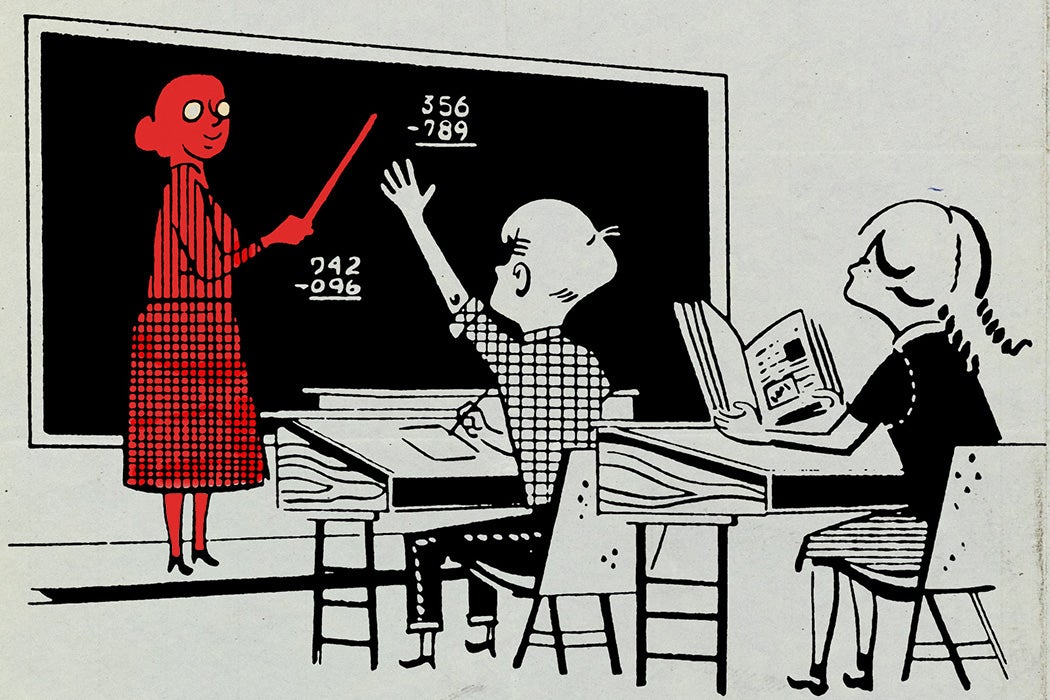 During the Red Scare of the 1950s, rumors abounded that Communist educators planned to infiltrate U.S. schools. So was that true? Not exactly, writes Jonathan Hunt. Turns out that the myth was more sinister than the reality—and could obscure a complete view of the preoccupations of radical educators in midcentury America.

Anti-communism was “central to American identity” in the mid-twentieth century, Hunt writes, and “Red-ucators” frightened those who imagined a looming horde of Stalin-worshiping Party puppets tainting every level of American education. But due to the repression of Communists and radicals in the United States, it’s difficult to ascertain just how many educators were avowed Communists. There were different shades of red, from “fellow travelers,” who aligned themselves with communism but never joined the party, to those who were open about their membership. And actual Communist educators were a diverse bunch. Some remained in the mainstream, while others dabbled in “separatist educational institutions whose central goal was activist organization and radical training.”

The thought of Moscow-controlled teachers eager to turn America’s youth away from capitalism captured the public imagination.

Among those institutions were Workers Schools, a group of free institutions that aimed to educate the working class and prepare them for various political struggles. There were training schools that prepared people for Party leadership, and left-leaning discussion groups. But none of those institutions focused on infiltrating mainstream schools.

Nonetheless, the thought of Moscow-controlled teachers eager to turn America’s youth away from capitalism captured the public imagination. Though there was little evidence these supposedly wily educators had in fact made their way into American classrooms, the concept itself speaks to a belief that teachers feel free to bring their personal political ideologies into the classroom and allow them to shape their teaching.

But in the case of Communism, that simply didn’t seem to happen. Hunt finds that Communist educators didn’t see the classroom as an ideal place to change students’ minds. In fact, students were much more likely than their teachers to use the classroom as a recruiting ground, and members of student movements were likely more responsible for radicalizing their teachers than the other way around.

Teachers feared losing their jobs if their Party memberships became known, but Hunt doesn’t think that explains their reticence to bring the movement into classrooms. Instead, he says, professionalism and a sense that their political sphere existed outside the classroom instead of within it kept them from turning their curriculum sneakily Communist. Educators “sought to make political impacts outside the classroom […] in the practices we associate with the duties and pleasures of citizenship,” he writes.

To paint Communist educators as one-dimensional vectors of Party propaganda is to underestimate them, Hunt suggests. It also elides the ways in which radical educators wrestled with their own participation in a movement whose alignment with Stalinism and totalitarianism came with a sense of betrayal and shame. “When we bury a rich, varied, and problematic history behind thin and powerful stereotypes,” he writes, “we allow not only our past but also our present to be commandeered.” That history—replete with principled and multifaceted educators but not with the superspies they were feared to be—is worth preserving, questioning, and continuing to explore.

The Red Scare and Women in Government

In 1952, a government administrator named Mary Dublin Keyserling was accused of being a communist. The attack on her was also an attack on feminism.