The anti-art art movement Dada was born in 1916 in Zurich’s Cabaret Voltaire. 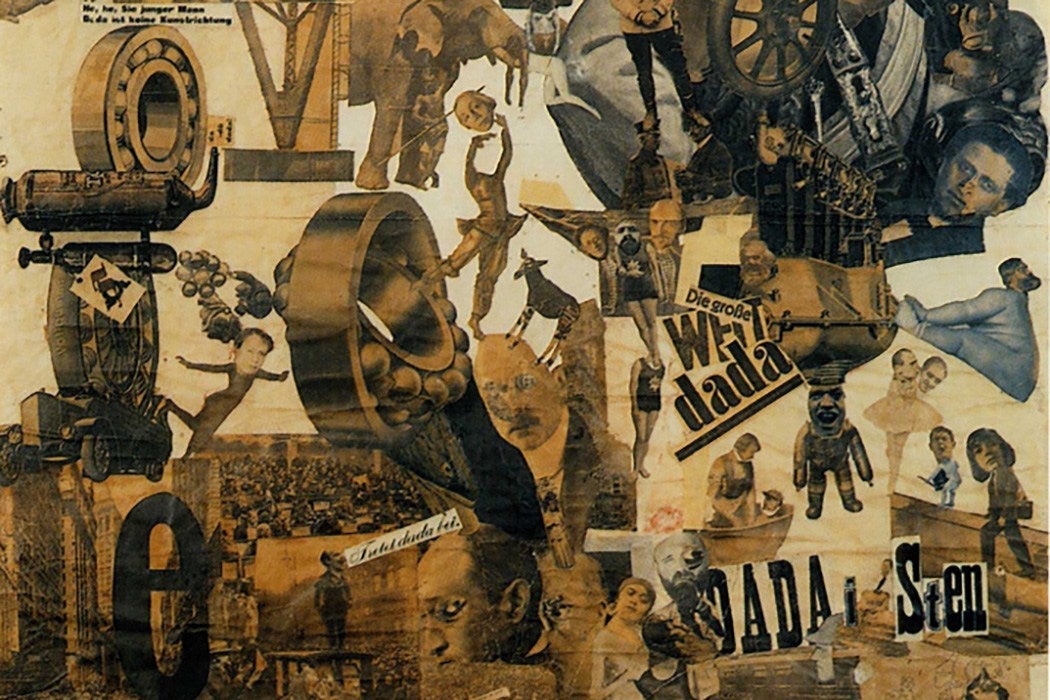 Ball’s slightly more comprehensible Dada Manifesto, which was really also an anti-manifesto, set that cabaret’s stage for the mash-up of artists, poets, and performers outraged and disillusioned by the war and the language that had helped lead them to the slaughter. The cacophonous scene at the Voltaire probably drove neighbor V.I. Lenin to distraction, at least before the Germans drove him to the Finland Station.

Dada combined absurdity and nonsense, radical politics and anti-politics, outrage and outrageousness in the mediums of spoken (more often shouted) word, theatre, collage, photomontage, cut-ups, assemblages, and readymades—Marcel Duchamp’s Fountain is no doubt the most famous of these.

Dadism “approves while denying, it contradicts itself, and acquires new force by this very contradiction.”

The Dada tendency was anarchic but, at least briefly, universal amongst a group of avant-gardists including Max Ernst, Hannah Hoch, Richard Huelsenback, Kurt Schwitters, Sophie Taeuber-Arp, and Tristan Tzara. This cast list made Dada incredibly varied and probably also contributed to its lasting influence. In hindsight, it seems this avant-garde movement had already started by 1915 in New York City, where the exiles Duchamp and Francis Picaba met local Man Ray and “anti-art” (the description was Duchamp’s) hijinks ensued. Far from the war, the New York Dadaists—initially “they gave no name to the movement they were creating, and of which they were half unaware”—were more humorous and ironical than their war-blasted European counterparts.

Even as an anti-art phenomenon that has taken its place in art history, Dada isn’t the easiest thing to describe, but this early effort by Georges Hugnet for the Museum of Modern Art is a good place to start: “Dada is ageless, it has no parents, but stands alone, making no distinction between what it is and what it is not. It approves while denying, it contradicts itself, and acquires new force by this very contradiction.”

Hugnet quotes a journalist at a Max Ernest exhibit in Paris in the early Twenties, where we find our heroes with “characteristic bad taste” crunching matches, constantly shaking hands, mewing like cats, insulting the attendees, shouting nonsense syllables, and cutting up newspapers to make a random poem as per Tristan Tzara’s instructions.

“The poem will resemble you,” said Tzara of the result, “And there you are—an infinitely original author of charming sensibility, even though unappreciated by the vulgar herd.”

Dada’s ghost continues to haunt fashion and design, literature, and music. Surrealism directly emerged from Dada, and happenings, Fluxus, and the Situationists were all inspired by it. Neo-Dada was a movement in the 1960s. Talking Heads gave writing credit to Hugo Ball for their 1979 “I Zimbra.”

But what exactly did Dada look like? Our friends at Artstor have compiled some notable Dada works of art here, and note, “As you can see from these images, Dada was not a style as much as an attitude.”

Fyodor Dostoevsky was born in Moscow on November 11, 1821. While he also wrote short stories and journalism, the politically-active ...