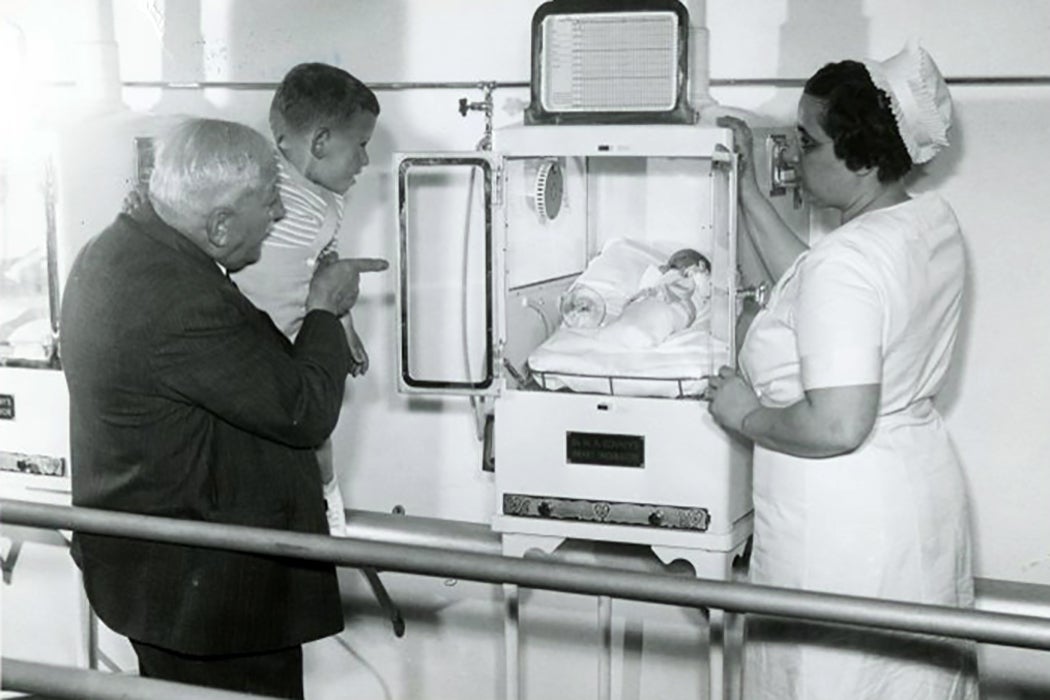 Tourists strolling along the Coney Island boardwalk in the summertime, circa 1920, would have heard the barkers beckoning: “Don’t forget to see the babies!” Those that heeded the call, perhaps after enjoying a hot dog or a ride on the Cyclone, paid a quarter and stepped into a room where the tiniest of infants, weighing two or three pounds each, were on display in individual incubators. Madame Recht, their nurse, occasionally wowed the crowds with a special trick: placing her diamond ring around a baby’s wrist.

It may have been the “Strangest Place on Earth for Human Tots to Be Fed, Nursed and Cared For,” as the Brooklyn Eagle reported in 1903, but for much of the early-to-mid twentieth century, precious few treatment options were available for premature babies. “Dr.” Martin Couney’s Barnumesque showcase was their best chance. Whether at Coney Island or Atlantic City, or any number of world’s fairs and amusement parks across America where Couney and his family set up their concession, the preemies that hospitals largely dismissed as “weaklings” got a second chance at life.

The novelist Dawn Raffel’s new book of nonfiction, The Strange Case of Dr. Couney: How a Mysterious European Showman Saved Thousands of American Babies, reexamines Couney’s story. Raffel unearths some fascinating history: Couney lied about his birthplace; changed his name (more than once); and may or may not have been a real MD. But he also pioneered the study and practice of neonatology in America, and some of the 6,500 or so newborns he rescued between 1896 and 1943 are still around to prove it.

An apprenticeship with Dr. Pierre-Constant Budin, who developed successful incubators at Paris Maternité, set the stage for Couney’s later sideshows. The plummeting French birth rate spurred more than a few doctors, including M. Alexandre Lion and Dr. Etienne Tarnier (Budin’s mentor), toward advances in incubation. In 1896, Budin sent his protégé, Couney, to the Great Industrial Exposition of Berlin to exhibit his Kinderbrutanstalt, “child hatchery.” Couney filled the newfangled incubators with live children, which impressed a promoter named Samuel Schenkein, who then invited him to exhibit at Queen Victoria’s Diamond Jubilee in London the following year.

The editors of the prestigious British medical journal The Lancet visited the nurslings there, and commented on the subject of incubator shows on a few occasions. In May, The Lancet outlined the technical aspects of incubator construction and mentioned the fact that the use of incubators “has not yet become general in England,” adding, “any successful attempt to improve the construction of incubators and to render this life-saving apparatus available to the general public must be welcomed.” In July, after some imposter sideshows popped up, the journal published another article focusing on the specially trained nurses and consistent feeding schedules required for effective preemie maintenance. In February 1898, in an article titled “The Danger of Making a Public Show of Incubators for Babies,” the editors decried the incubator shows stationed too close to smelly leopard cages and penny peep-shows.

Nonetheless, incubator shows quickly “became a craze” after their popular—and profitable—British debut. So Couney, who had by then emigrated to the United States, took the show on the road. First stop: Omaha. Located on the Midway, near the Wild West Show and the camel ride, Couney failed to attract much attention, and he took to hawking Krug Cabinet beer to nursing mothers, though it was said that, to keep their milk as healthy as possible, he wouldn’t let his wet nurses have so much as an orange soda.

After a child was admitted, it received a bath and, if it was able to swallow, a small dose of brandy.

From there Couney turned up at major fairs and amusement parks, playing the role of courtly greeter and schmoozer. After Omaha, he hired nurse Annabelle Maye Segner, later his wife, who professionalized the exhibit with her insistence on cleanliness and procedure. After a child was admitted, it received a bath and, if it was able to swallow, a small dose of brandy. Then it was swaddled, beribboned (pink or blue), and placed in an incubator, where it stayed on view all day, except during feedings every two hours. Aside from constant warmth, what the newborns needed most was breastmilk in whatever form it could be administered: wet nurse, bottle, or spooned through the nose (another of Madame Recht’s special nursing skills). The tykes were so teeny—baby Arlene from Long Island weighed between one and a half and two pounds when she arrived in 1932—that onlookers questioned whether they were really alive.

This “pay-per-view NICU,” as Raffel aptly describes it, was part of a longer tradition of medical and freak show spectacle, according to the historian Bert Hansen. Hansen compares the children to those on display at the Bowery’s Globe Dime Museum in 1886. These children suffered a dog attack, which occasioned the use of Pasteur’s experimental rabies vaccine. The incubator infants and these other marvels “satisfy the public’s curiosity about the new miracles of medicine,” Hansen writes.

Couney would have agreed. His audience adored the wee babes, and he was proud of his role as a propagandist for preemies. Not only did his incubator shows publicize the issue of preterm birth—on which doctors largely kept mum, due to the high rate of fatality—he educated the public and advanced premature infant care more than anyone else in the U.S. at the time. He was also, perhaps unwittingly, combating another spreading evil: the eugenics movement. Doctors had long labeled preemies as “weaklings” that couldn’t be saved.

That feeling prompted a question in the Boston Medical and Surgical Journal in 1901, regarding whether it was even “worthwhile” to try. These runts might pollute the gene pool, it was inferred. One Chicago doctor went so far as to make a film with the tagline, “Kill Defectives, Save the Nation.” And then there were the Better Babies contests that awarded gold ribbons to the fittest examples of American offspring, held at some of the same fairs where Couney exhibited his little fighters.

The fact that Couney was able to revive these “weaklings” and turn them into long-lived, healthy members of society, with a success rate of 85 percent, wasn’t enough. Medical professionals dismissed his contributions and remained skeptical of incubators, especially after a deadly incubator show in St. Louis in 1904 run by a rival. Similarly, in 1911, when New York’s Dreamland park, where Couney’s babies were on exhibit, burned down—all of the babies were spared—the president of the New York Society for the Prevention of Cruelty to Children declared that premature infant care ought only to be done in hospitals.

“But,” as Raffel points out in her book, “the work wasn’t being done in hospitals… Hospitals couldn’t spare nurses to sit all day and all night with a single child too fragile to suckle.” Even as late as 1939, in New York City, there might be one incubator in a given hospital, which might already be in use, or prohibitively expensive. Which is where Couney and his staff took over—accepting the most desperate cases, providing round-the-clock supervision for weeks or months, and then returning them to their parents once they had stabilized or the concession had to close for the season, whichever came first.

Branded a quack—and worse, a baby-swapper—by some, Couney’s brand of “vigilante medicine” (in Raffel’s words) worked around this slow-moving medical establishment. One of the only physicians to credit him was Dr. Julius Hess, now considered the father of American neonatology. He published the field’s first textbook, Premature and Congenitally Diseased Infants, in 1922 and cited Couney’s expertise in the preface. In 1933, Hess backed Couney’s show at Chicago’s Century of Progress, even though his concession was situated right next door to Sally Rand’s sexy fan dance.

Couney and Hess both lived to see Cornell Hospital, in New York, open the first dedicated premature infant station in 1943, which also happened to be the year that Couney’s Coney Island show closed for good. Admission was down, his wife and longtime partner had died, and he was in his seventies. He was also broke; the exorbitant operating expenses at the New York World’s Fair of 1939 had just about ruined him. He never billed the parents of his preemies, counting instead on the nickels and dimes of spectators.

He may have been mysterious, but Couney, who died in 1950, was also tenacious. Where there was a problem, he had pursued a solution, one that many considered vulgar: putting freakishly small babies on display in order to finance their healthcare. It was certainly daring and often daunting, and for all of his accomplishments, he was underappreciated—except, of course, by the thousands of preemies he saved and their families. 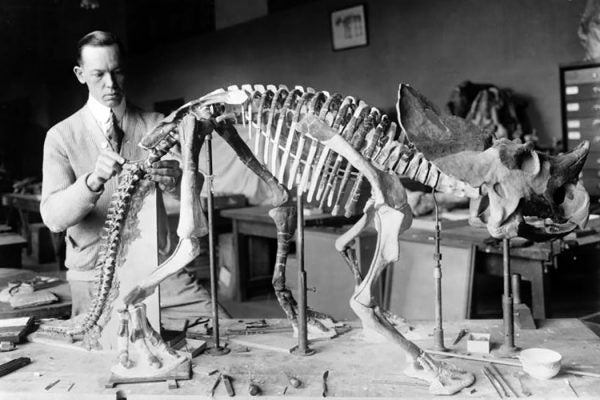