Can You Hear It? The Cicadas Are Back

After 17 years quietly developing under the soil, 3 species of periodical cicadas emerged this summer. How do these insects coordinate? 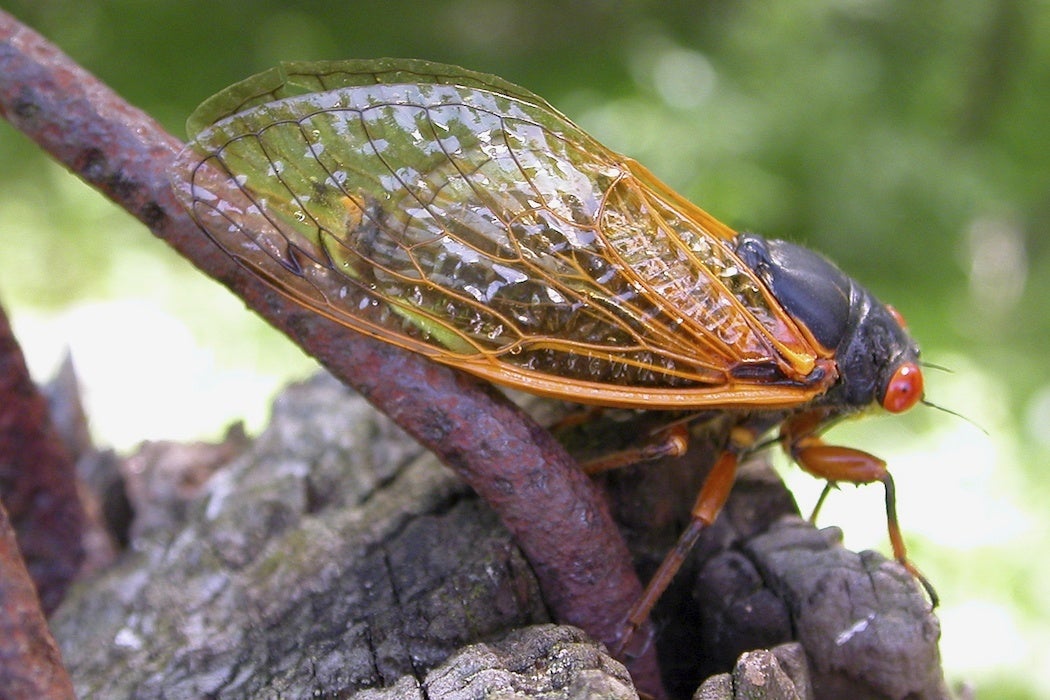 If you happen to have been in Ohio or West Virginia, you might have noticed a peculiar buzz in the air recently. After seventeen years quietly developing under the soil, three species of periodical cicadas emerged this summer across a swath of land south of Lake Erie. Also known as seventeen-year locusts, the periodical cicadas appear in coordinated bursts every thirteen or seventeen years—always a prime number. After a frenzy of mating, adults deposit their eggs on tree limbs and die. Their entire above-ground life lasts less a month: half of one percent of the time they spend underground. Meanwhile, their nymphs hatch, fall to the ground, and burrow down into the earth, where they’ll spend the next seventeen years feeding on tree roots.

Cicadas aren’t actually locusts, but their large size and occasional superabundance has earned them the nickname. In the eastern and central United States, it’s hard to avoid noticing their emergence. For a few weeks, the mating drone of the male cicadas is heavy and continuous, palpable in the hot summer air. During an emergence that took place when I was ten years old, I obsessively searched tree trunks for shed skins—hollow casts, exquisitely detailed—and stored them in my old jewelry boxes. The vast, mostly invisible rhythm of their lives fascinated me. They had been waiting patiently underground for longer than I’d been alive.

Periodical cicadas are remarkable not only for their long development times, but also for their incredible synchronicity. This presents a sort of evolutionary puzzle for biologists, since not all cicadas are periodical—most species emerge in staggered batches year by year. What makes these few species coordinate across entire geographic regions? And what’s with the prime numbers?

To understand the value of coordination, consider the effects of cicadas on the rest of the ecosystem. Some of these effects are pretty bizarre: Their calls interrupt the calls of certain frog species. Tree trunks grow more slowly in emergence years, when huge numbers of larvae arrive in the soil all at once, and some trees have even developed specialized defenses against cicada eggs.

More importantly, periodical cicadas are a great source of food for many wild predators. Local abundance of some rodents increases by 50% in cicada emergence years—in fact, rodents may even be able to anticipate the availability of cicadas before they emerge. In the years following cicada emergence, songbird populations increase. Even fish-eating seabirds get in on the action: In 1924, an observer in coastal Massachusetts noticed gulls and terns snatching cicadas out of the air. A wide variety of species respond to cicada pulses by increasing their productivity.

To withstand the onslaught of predation, cicadas play a numbers game.

To withstand this onslaught of predation, cicadas play a numbers game. If they were to emerge in equal, predictable numbers every year, predator populations might be able to eat an entire year’s crop of cicadas. However, since cicadas emerge all at once after years of absence, predators are swamped with more food than they can possibly consume. This process, called satiation, increases the chance that cicadas will escape being eaten for long enough to survive and reproduce. Similar patterns exist in other prized food resources. Acorn-bearing trees, for instance, produce large crops in some years and no crops in others, making it more likely that predators will leave stored acorns behind to grow into trees.

The reason for the prime-numbered gestation periods is a little more complicated. It comes from a phenomenon known as the Allee Effect: the smaller a population gets, the less likely its members are to find one another and reproduce. If two different species with different development times emerge and mate with one another, the theory suggests, they create hybrid offspring with a development time somewhere in the middle. These offspring emerge in off-years, which means they have trouble finding other cicadas to mate with. Prime-numbered cycles minimize this problem by making it less likely that different species will emerge at the same time. A recent study used mathematical models to show that, over time, as hybridization drives other cycles into extinction, prime-numbered life cycles are the only ones left standing.

Evolution has produced a formidable survival strategy in periodical cicadas, but it has also backed them into a corner. A species that only appears every seventeen years doesn’t have much flexibility to respond to changes in environmental conditions. Cicada emergence depends on soil temperature, meaning that warming climates could push back emergence dates. If soils warm too early, cicadas might emerge before their food resources. The speed of urban development outpaces cicada time, and it’s hard to tell how many larvae are lost due to deforestation, forest fragmentation, and the creation of paved surfaces.

In a few weeks, the cicadas will have disappeared, to the relief of many. In the meantime, if you’re lucky enough to be in the midst of a cicada emergence, enjoy this strange and wonderful example of evolution in action. Who, after all, knows what the next seventeen years will bring?

Share Tweet Email Print
Have a correction or comment about this article?
Please contact us.
evolutionary biologyJuliet LambRE: WildsustainabilitywildlifeBiotropicaEvolutionJournal of Animal EcologyProceedings of the National Academy of Sciences of the United States of AmericaThe Quarterly Review of Biology

The Seventeen Year Cicada, Alias Locust
By: E. A. Andrews
The Quarterly Review of Biology, Vol. 12, No. 3 (1937), pp. 271-293
The University of Chicago Press
Inhibition of Evoked Calling of <i>Dendrobates pumilio</i> Due to Acoustic Interference from Cicada Calling
By: Vivian P. Paez, Brian C. Bock, and A. Stanley Rand
Biotropica, Vol. 25, No. 2 (1993), pp. 242-245
Association for Tropical Biology and Conservation
Population Dynamics of a Generalist Rodent in Relation to Variability in Pulsed Food Resources in a Fragmented Landscape
By: Gregg J. Marcello, Shawn M. Wilder, and Douglas B. Meikle
Journal of Animal Ecology, Vol. 77, No. 1 (2008), pp. 41-46
British Ecological Society
The Periodical Cicada Problem: I. Population Ecology
By: Monte Lloyd and Henry S. Dybas
Evolution, Vol. 20, No. 2 (1966), pp. 133-149
Society for the Study of Evolution
Allee Effect in the Selection for Prime-Numbered Cycles in Periodical Cicadas
By: Yumi Tanaka, Jin Yoshimura, Chris Simon, John R. Cooley, Kei-Ichi Tainaka, and Robert May
Proceedings of the National Academy of Sciences of the United States of America, Vol. 106, No. 22 (2009), pp. 8975-8979
National Academy of Sciences 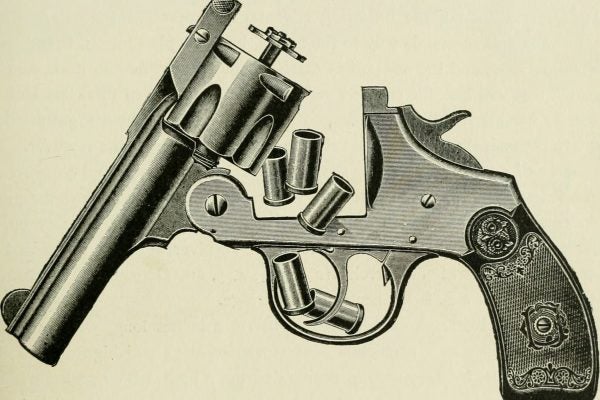 Why Doctors Are Prescribing Gun Legislation

Gun legislation is once again becoming a public health concern, according to the AMA and other medical groups.