A Feminist Reading of The Long Winter

In The Long Winter, often praised as Laura Ingalls Wilder’s greatest novel, the villain may be not the snow, but oppressive gender roles. Need some comfort reading? It doesn’t get much better than the Little House books, Laura Ingalls Wilder’s classic autobiographical novels that turn the struggles of the prairie into the stuff of great children’s and young adult literature. But in The Long Winter, often praised as Wilder’s greatest novel, the villain may be not the snow, but oppressive gender roles. For Ann Romines, the book is a battle with nineteenth-century gender norms—and they’re as scary as any storm.

The novel follows a teenaged Laura during the hellish winter of 1880-81, in which blizzard after blizzard prevented trains from reaching the West and stranded thousands of homesteaders without food, supplies, or warmth. It tracks the psychological and personal effects of the winter on the Ingalls family as they triumph over both the weather and their own exhaustion and near starvation.

In Laura Ingalls Wilder’s The Long Winter, women stay inside and turn their household tasks into civilizing acts that subdue and impose order on the wild West.

The reality isn’t pretty. Through vignettes of both storms and images of what Romines calls “preservative housekeeping,” Wilder imbues the book with nightmarish visions of life as a housebound woman.

At the beginning of the book, Laura helps her father with the haying—a task in which she revels. But then—with the help of winter weather—she is forced into a gendered role. At school, she’s reminded that girls must be quiet and orderly. As Pa goes hunting, Laura stays inside with her sisters and mother. “While Pa is stalking on the boundless prairie,” writes Romines, “she is stuck making sheets.”

Ma tries to show Laura the potential women have to turn their work into an arena of invention and adventure just as broad as Pa’s outdoors world, but Laura rebels against a world of bedsheets and pickles. While Ma works magic on the world through housekeeping—turning a meager crop into delicious preserves or a mere jug of water into a gingery treat—Laura worries that she may be trapped in her new role.

For Romines, the frozen, quiet blizzards that recur throughout the book represent Laura’s fear of being stifled and silenced—and the maddening winds that swirl around the new town of De Smet, South Dakota symbolize Laura’s fury and confusion about her future. Men leave the house to perform active tasks, even save lives. Women stay inside and turn their household tasks into civilizing acts that subdue and impose order on the wild West.

As the book continues, the family becomes more and more trapped by snow, grinding wheat into flour using a coffee mill and twisting hay into fuel for the fire. They must rely on pre-industrial skills to eke out an existence, and Ma’s domestic magic literally keeps the family alive.

When the weather finally breaks and the family celebrates a bountiful Christmas in May, Laura’s narrative bursts with new appreciation for her mother’s domestic toils. “Laura now has a far more acute and anxious awareness of how a woman must keep things going…and the cost of such control,” Romines writes. In Laura’s world, domesticity is a matter of life and death. 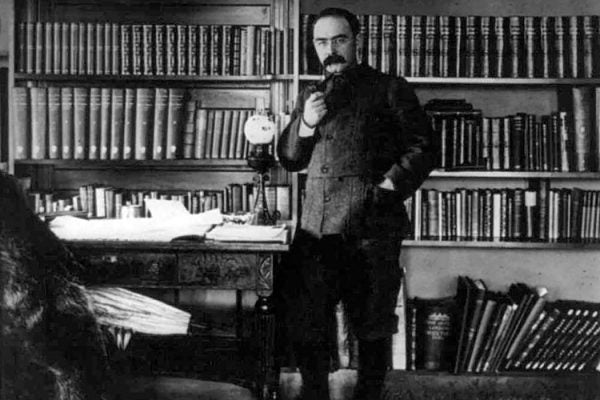 With New Year’s Day on the horizon, many people will write their resolutions. Rudyard Kipling's poem explores the trials and tribulations of resolutions.