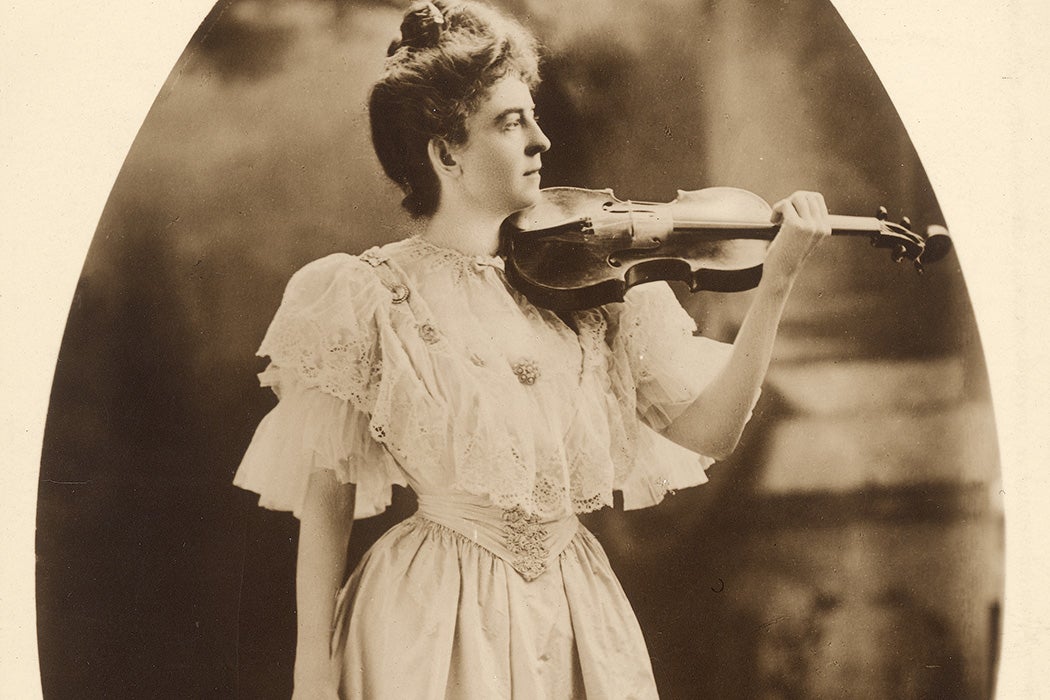 In the early twentieth century, many women were entering the workforce and agitating for the right to vote, while many men were trying to figure out what masculinity meant in a world where the importance of physical strength was declining. As historian Gavin James Campbell writes, these questions played themselves out, among other places, in classical music.

Throughout the nineteenth century, Campbell writes, many middle- and upper-class women learned music as a domestic art, but women who made a career of performance were a rarity. Over time, though, exceptions like singer Jenny Lind, pianist Teresa Carreño, and violinist Maud Powell inspired imitation. By the turn into the twentieth century, many young American women were looking at music as a possible profession. Some became part of the opera, which was growing in popularity and required talented female voices. Others reacted to existing orchestras’ refusal to include female musicians by forming all-women musical organizations.

Though women were emotional creatures, it took a man’s mind to turn those feelings into the logical, mathematical form of a musical score.

While performance generally became more acceptable for women, as long as it didn’t interfere with their femininity or domestic work, composing was a different matter. Many critics believed that, as one wrote for the Nation in 1902, “on the creative side, music is distinctly a manly art.” Some argued that though women were emotional creatures, it took a man’s mind to turn those feelings into the logical, mathematical form of a musical score.

Yet, Cambell writes, in everyday life, music was becoming more and more associated with women. Within their accepted role as moral agents of the community, privileged women formed clubs to promote music as a civic good. By the 1920s, they were organizing free concerts in parks, musical events in settlement houses, and music programs in factories and prisons.

As more women embraced music as a profession or a calling, some men became worried that the world of the orchestra was becoming feminized. Composer Daniel Gregory Mason suggested that women’s “natural conventionality” had led to “ a regrettable tolerance of unprogressiveness and mediocrity.” Some fretted about boys and men being repelled from the whole world of music thanks to its “girly” associations.

Campbell notes that those who hoped to encourage boys to engage with music worried that their most prominent role models were eccentric geniuses with long hair and little interest in financial success. In response, some wrote profiles of musicians touting their strength, while others described the love of music exhibited by men like Theodore Roosevelt and Charles Schwab.

Some also offered advice for seeking out masculine music. According to a 1905 Harper’s Bazaar article, Bach was a “manly music-maker” and Beethoven a “genuine man,” while Haydn sounded like “a nice gossiping old lady” and Chopin was “morbidly feminine.” Many deplored the trend of symphony performances replacing brass band concerts, which represented “the strength, the virility and refinement of the male.” John Philip Sousa himself told one reporter that fans of his military marches were “strong and healthy” and liked “virile music.”

If much of professional music-making was becoming too feminine for these supposedly virile men, they need not despair; they could still carve out a portion of the classical music world for themselves. As Campbell reports, perhaps none associated with classical music were admired more than orchestral conductors. “Like the great industrialists, they controlled large numbers with the mere tremble of their hand and twitch of their eyebrow.” These powerful men, “born to command,” demonstrated “that artistry and masculinity were not at odds.”