A mother plays the guitar while her two daughters sing, and guitarist Joan Jett of the rock band "The Runaways" performs on stage in Los Angeles in August, 1977
via Wikimedia Commons/Getty
By: Ashawnta Jackson
2 minutes
Share Tweet Email Print

The guitar isn’t just a musical instrument laden with history, it’s also a symbol. As sociologist Deena Weinstein writes, beginning in the 1960s and continuing today, the guitar “is the icon of rock, incorporated into the brand logos of rock museums, cafes, and musical equipment stores.” But depictions of guitarists—at least the ones we know—have largely been men. “The instrument is seen to embody masculine traits,” Weinstein explains.

But in earlier times, the guitar was seen as a women’s instrument, and it wasn’t always so beloved. In fact, music historian Erik Stenstadvold writes, historically “the position of the guitar was uniquely controversial and conflicted.”

Female musicians could keep their bodies in graceful, feminine poses while playing.

In 1783, German philologist and composer Carl Ludwig Junker wrote an essay explaining exactly which instruments were proper for women to play. Unsurprisingly, he “issued a strict ban on women playing what he regarded as male instruments,” which were most of them, according to Stenstadvold. Men played professional, orchestral instruments, while the guitar was seen mainly as an instrument to be played at home, by amateurs. For critics, this meant women.

The guitar was good for a woman, Junker and others argued, because orchestral instruments “threatened the concept of her ‘natural’ subservient role and compromised her decorum,” Stenstadvold writes. Female musicians could keep their bodies in graceful, feminine poses while playing. Musically, the critics thought, the guitar was also a perfect instrument for women because it was made for “simple, unpretentious music, most of all in a subordinate role as an accompanying instrument.”

Even as it gained popularity among professional musicians, critics still saw the guitar as a lesser instrument. As Stenstadvold writes, in Europe during the late 1700s to the mid-1800s, “the guitar never achieved acceptance by the musical elite as a concert instrument, in spite of the success of a few individual performers.”

Fast-forward a century, and jazz, country, big band, and later rock were changing how people and advertisers saw the guitar. Its image was becoming less associated with women. Images of women guitarists became increasingly rare. In their study of music ads in Seventeen magazines from 1944 to 1981, Lyn Ellen Burkett and Kim Wangler note, “girls were pictured […] standing near guitars, and watching boys playing guitars, but rarely was a girl shown holding or playing a guitar.”

This shift made way for an image that was, as Weinstein puts it, “the individual artist uncompromisingly devoted to his own music—and rock was a masculinist practice.” There was, of course, some resistance to this image, Burkett and Wangler explain, largely as a result of the women’s movement: There was “not so much need to worry about your boyfriend feeling threatened because you can play as well as he can.” Rock on. 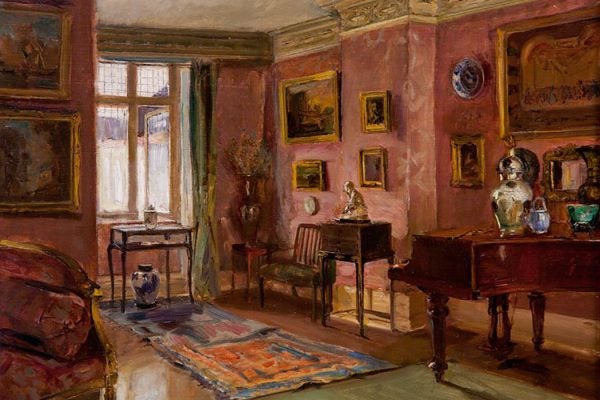