Why The Young Pope Matters

Has anything like the events depicted in The Young Pope ever happened before? The answer, you may be surprised to learn, is yes. 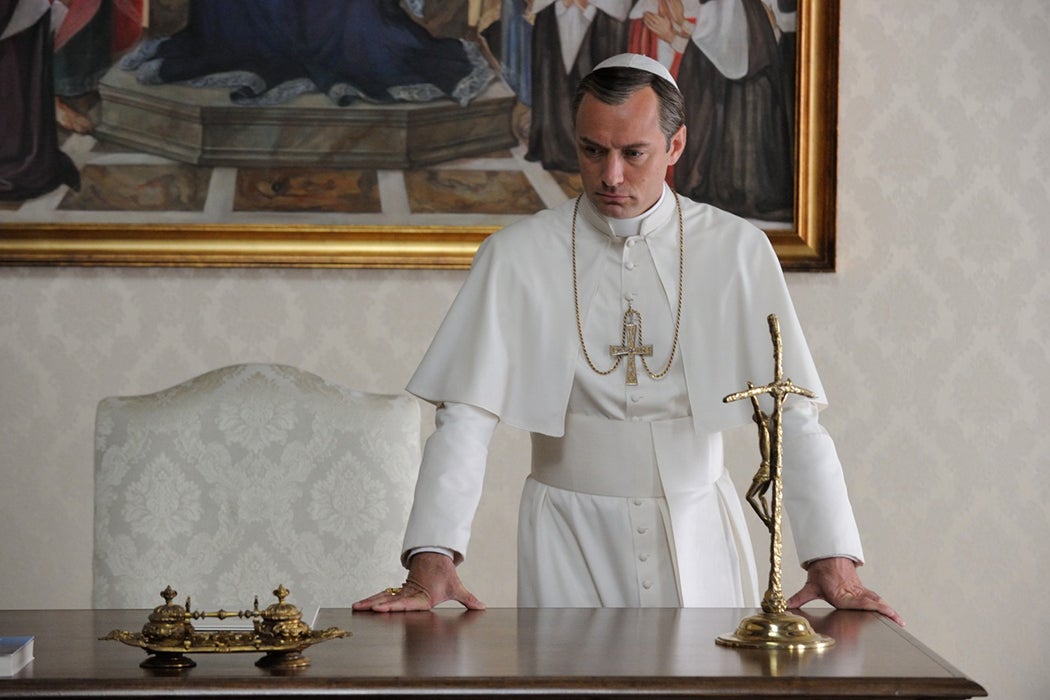 The Pope watches through a window as an infertile couple has rough sex in their living room. He cajoles a priest to spill the secrets of the confessional with him, and presses Vatican employees to share their gossip. He jokes about his lack of faith, and tells various church officials of his creeping atheism. The Pope also threatens a purge of gay priests, insults politicians who come to visit him, rejects the use of his image in any promotional or marketing materials, and delivers a stinging rebuke to the faithful in his opening homily. We may find ourselves tapping our friends and spouses on the shoulder while watching Paolo Sorrentino’s HBO series The Young Pope, puzzled, wondering: Could any of this truly happen? Has any of this ever happened before? While there isn’t any firsthand testimony of a past papal Peeping Tom, the answer, you may be surprised to learn, is yes.

The Young Pope is a show as much about the Vatican—a hothouse world of false fronts, a city-state of wide, lavish spaces devoid of human life—as it is about the Pope. It begins by imagining a most unlikely development: the crowning of an American pope, still only in his forties, to steward the Church for decades to come.

Sorrentino’s pope is a mix-and-match affair, a mash-up of popes past. His Pius XIII is a reactionary crusader in the vein of Pope Benedict XVI, chasing after homosexual priests, tightening the restrictions on entering the priesthood, and perpetually castigating the masses for their spiritual failings. That this pope is himself staggering through a personal spiritual crisis of his own was likely not a trait shared by Benedict, who before ascending to the papacy had, as Cardinal Joseph Ratzinger, been the Prefect of the Sacred Congregation for the Doctrine of the Faith, responsible for determining Catholic doctrine.

The Young Pope casts its American-born pontiff as a kind of unholy mixture of Pope Francis and Donald Trump.

The show reshuffles Vatican battles from the recent past as well, filtering familiar scandals through the lens of its conflicted protagonist. Pope Pius watches curiously as his cardinals crowd fawningly around a handsome male personal assistant to the prime minister of Greenland, while the prime minister herself, a world leader as well as a noticeably attractive woman, goes mostly unnoticed. The pope has already been quizzing his helpers about the prevalence of gay men at the Vatican. After his retirement in 2013, Pope Benedict had complained, in his memoirs, about a “gay lobby” in the Vatican that had sought to exert undue influence on the Church. The implication was not only that the Vatican, supposed province of the celibate, was full of gay men, but that they had banded together to serve as a sub rosa pressure group within the highest reaches of the Catholic Church. The Young Pope subtly references Benedict’s bitter criticism with a youthful pontiff who seeks information about the closeted gay men in his orbit, causing many to fear that his intelligence-gathering is only the first step before a full-scale purge.

And like the short-lived Pope John Paul I, whose papacy lasted only one month before his untimely death in 1977, this pope (spoiler alert!) collapses after his first public speech, seeming to have been either struck down by the appearance of his birth parents, who had abandoned him, or visited by a heavenly apparition. The season ends with viewers uncertain of the pope’s fate, left in the dark about his future well-being (although one can assume that The Young Pope is unlikely to kill off its young pope).

In the real-world Vatican, the notion of non-Italian popes has taken root after lying fallow for centuries. Jude Law’s Pius XIII is yet one more step away from the longtime consolidation of church power in Italian prelates, who had held the papacy uninterrupted for more than four centuries. The current (real world) pope, Pope Francis I, is from Argentina, and his predecessor, Benedict XVI, was German. The Polish Pope John Paul II, crowned in 1978, was the first non-Italian pope since Adrian VI in 1522. And Francis is the first Pope not originally from Europe since Pope Gregory III, originally from modern-day Syria, was anointed as Bishop of Rome in 731. The particular Americanness of the young pope, whose non-papal name is Lenny Belardo, is mostly underplayed (his Latin is flawless), but the sense of culture shock from a Vatican state, long accustomed to their own manner of conducting business, rattled by an outsider suddenly granted infallible authority, is palpable.

The Young Pope casts its American-born pontiff as a kind of unholy mixture of Pope Francis and Donald Trump, an arch-conservative in the guise of a liberator. Pope Pius is a roiling mass of conflicting impulses, dreaming of imploring the masses gathered in St. Peter’s Square to embrace gay marriage and end priestly celibacy before waking and doing precisely the opposite, castigating Catholics for their sinfulness and sloth. Pius XIII casts himself as an avenging angel here to undo Francis’ legacy. The current pope, who goes unnamed in the series, is still subtly referred to in Pius’ speech, in which he mentions, in sneering tones, the “great expressions of fondness from the masses” for his predecessor. (“Masses,” from Pius’ mouth, takes on roughly the same timbre as “swamp demons” or “infomercial hosts.”) “What I want,” Pius thunders, “is absolute love and total devotion to God.”

The Young Pope, as might be expected from an HBO series with a lavish budget, takes on a unusually sensual tone for a show about the papacy. The new pope conducts an extended flirtation with a childless young woman named Esther (Ludivine Sagnier), which culminates in a simultaneously erotic and ludicrous scene in which she unbuttons her shirt, places the pope’s hand on her chest, and commences saying a Hail Mary. Pope Pius, who allows her to guide his hand, ultimately demurs, telling Esther that he cannot love her the way she wants, being less of a man than a coward. Still, Sorrentino’s jab in the direction of papal romance calls back to the medieval glory days of the libertine Pope Alexander VI, who appointed two of his children to powerful positions in the church hierarchy and fathered another while serving as pope.

This pope is less a satyr than an ultramontane, intent on liberating the Catholic masses from their liberation.

Pius is mostly asexual, but our access to his inner life, much of which revolves around his missing parents and long-lost first girlfriend, imply a certain sensual release absent from his abstemiously rigorous priestly life. Pius is a vicar of Christ who dreams of becoming a man, and whose fire-breathing resolve, we come to understand, is a product of his ferocious attempts to tamp down his own humanity. Soon after Pius spies on Esther having rough sex with her husband (and Esther spies him spying on her), she becomes pregnant, and gives birth to a child. The child is not Pius’ in any biological sense, but it is clear that he lays claim to the baby, even as he evinces little understanding of parenting. In one hilarious and jarring moment, the pope clumsily drops the baby, also named Pius.

But this pope is less a satyr than an ultramontane, intent on liberating the Catholic masses from their liberation. After Pope Pius’ first homily, a character notes that it has been four hundred years since a pope took such a hard line with the faithful. The reference is deliberately vague, but given the new pope’s name, The Young Pope appears to be placing its Pius firmly in the tradition of Pope Pius V, who reigned as Bishop of Rome from 1566 to 1572. Pius V eventually would be canonized, but he devoted much of his papacy to consolidating Vatican control over what he viewed as the Reformation’s heresies, which had undermined the Church.

Under his watch, the semi-dormant Inquisition, hunting in search of heretics, was drastically emboldened. Pope Pius V, like our Pius XIII, was little interested in politesse or in catering to the foibles of the faithful. The Vatican, unsettled by the rise of Martin Luther and Protestantism, sought to aggressively stamp out any such conflagrations, content with a smaller but more ideologically unified Church. Moreover, the sixteenth-century papacy still had a military under its control. Pope Pius V, himself a former inquisitor, assisted the French monarchy in suppressing the Protestant Huguenots with force, sending Vatican soldiers to France to shore up the battle.

The show dutifully gestures at scandals large and small in the world of the curia, with American cardinals who turned a blind eye to pedophile priests and Mother Teresa coming in for a solid whacking. In both cases, the show personalizes free-floating philosophical and moral accusations. Archbishop Kurtwell (Ray Boyd) does not just fail to protect children, he is himself the man responsible for their abuse. And the show’s Mother Teresa figure, Sister Antonia (Milvia Marigliano), who runs a network of hundreds of charitable villages for the indigent under the church’s aegis, is exposed by the pope as a tormentor who sexually and physically abuses her charges.

For all the ways in which The Young Pope turns a caustic eye toward the Vatican, interpolating the history of the papacy in a fashion likely disheartening to the world’s one billion Catholics, the show has another mode, one likely more pleasing to the faithful. Pope Pius XIII, understood to be a deeply conflicted and troubled middle-aged man, is also, in the show’s ambiguous valence, something resembling a saint. Like the seven popes inducted to sainthood in the past millennium, including John Paul II and John XXIII, Pius XIII appears to be responsible for miraculous works of his own. When the truth about Sister Antonia trickles out, the Pope has his entourage stop at a nondescript gas station off an Italian highway. As he kneels in prayer on the greasy macadam, Sorrentino cuts between shots of the pope and Sister Antonia, who seems stricken by the power of the pope’s prayer.

In addition to striking down Sister Antonia and making Esther fertile, we hear word of a potential act of healing the pope had achieved while still a child, curing a direly sick woman in his hometown. The pope is, quite literally, a miracle worker, even as he engages in ethically questionable behavior and seeks to castigate his loyal followers. Can we handle a man of such profound contradictions? That, The Young Pope seems to be telling us, is a matter of faith.