Yemen is suffering a major humanitarian crisis. How did the country get to such a precarious state, and why aren’t Americans paying more attention? 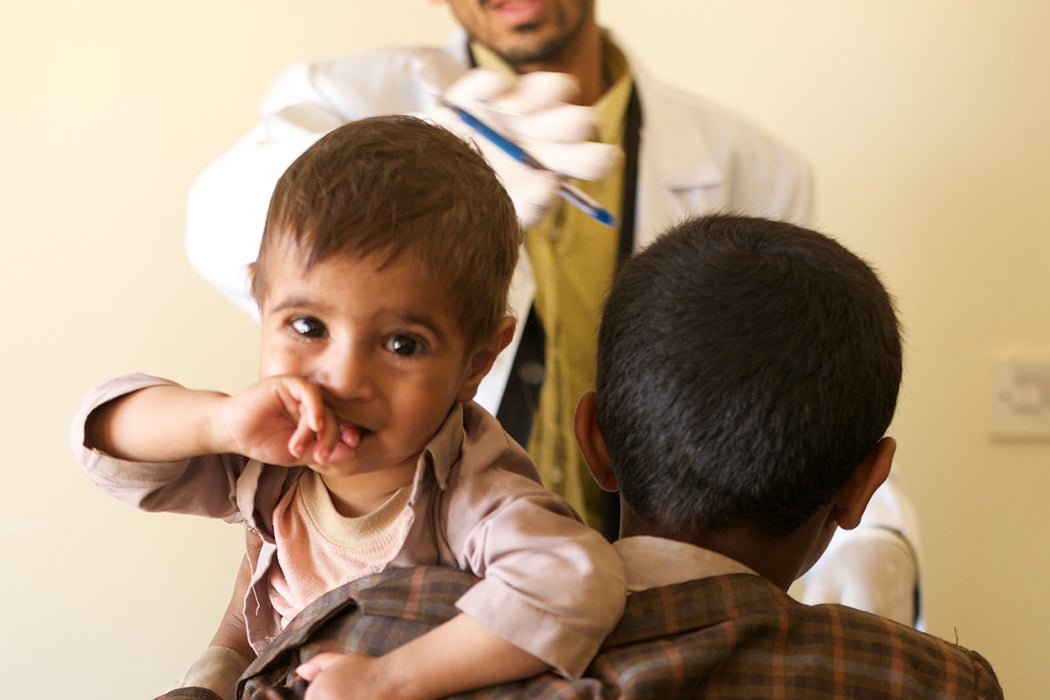 A child is ministered to in a health center, 'Amran, in Western Yemen.
via Flickr/Julien Harneis
By: Eric Schewe
7 minutes
Share Tweet Email Print

Children are starving to death in Yemen. The NGO Save the Children has estimated that in 2017, more than 50,000 children died from cholera and famine caused by Saudi Arabia’s bombing campaign and naval blockade against the country. A further 8 million Yemenis are near starvation.

What Saudi Arabia is Doing in Yemen

Since 2011, Saudi Arabia has sought to bolster its power and authority in the Middle East, and in the Arabian Peninsula in particular. In the chaotic aftermath of the “Arab Spring” protests, it has sought to support its allies in many different regional conflicts. In 2015, the Houthi Shiʿi Islamist movement occupied Yemen’s capital Sanaʿa and deposed Saudi-supported President Abdrabbuh Mansur Hadi. Shortly thereafter, Saudi Arabia launched “Operation Decisive Storm” in a coalition with eight regional allies including the United Arab Emirates, invading the country with ground troops to fight the Houthis, in addition to the air raids and blockade. It has justified this choice to the world by claiming it is countering Iranian support for the Houthi movement.

Saudi Arabia has taken this tactic thanks to its long-term alliance with the United States, America’s long-term diplomatic tensions with Iran, and the friendship of the Trump administration in particular. It can rely not only on unlimited military sales from the U.S., but also U.S. intelligence and mid-flight refueling of its bombers by the U.S. Air Force. Until just last month, Saudi Arabia and the U.S. military could also depend on the blind eye the American newsmedia has turned on the crisis. Although outlets such as PBS have covered the conflict, major cable TV networks have broadcast little news on the Yemeni war. Even liberal-tilting channels such as MSNBC covered Stormy Daniels 455 times but Yemen not once from January 1st to July 25th. Yemen is a poor and marginalized country without the strategic importance even of Iraq and Afghanistan, where more U.S. wars continue mostly unreported.

On August 9th, a Saudi coalition airstrike hit a bus carrying Yemeni children, killing forty-three. This event sparked news coverage of the war in Yemen and bipartisan support for placing restrictions on U.S. support for the Saudi campaign. Senator Elizabeth Warren sent U.S. Central Command head General Joseph Votel a vehement letter requesting clarification of the U.S. role in the campaign—in particular, if it provides intelligence leading to strikes on civilians. The annual defense authorization law, providing the military’s yearly budget, passed on August 13th with language requiring the U.S. to take steps to protect civilians and end the war. But President Trump rejected these clauses in a signing statement as interfering with his “constitutional authorities as Commander in Chief.”

Without sustained resistance backed by public interest, it seems implicit U.S. support for Saudi Arabia may go unchallenged. But achieving this means challenging a number of deeply ingrained U.S. beliefs about the region and diplomatic relationships that have endured for decades.

Yemen has been torn by civil war after mass protests in 2011, influenced by the “Arab Spring,” led a rival faction in the Yemeni army to remove longtime President Ali Abdullah Saleh from power. Civil order broke down, and several different groups came to assume regional control around Yemen. These groups held grievances long predating 2011. Many analysts see the mountainous terrain and tribal loyalties in Yemen as factors that automatically prevent the establishment of a stable Yemeni state and citizenship.

By contrast, research fellow Erwin van Veen focuses on the specific choices of Yemeni elites that have destroyed the social contract in Yemen—and the possibility for rebuilding institutions to achieve social justice.

The contemporary nation-state of Yemen has only existed since 1990. For many centuries, northern Yemen was ruled by imams of the Zaydi Shiʿa sect, who traced their lineage to the prophet Muhammad. In the late 1800s, the British established a protectorate in the southern city of Aden, which was an important coaling station connecting British colonies in Egypt and India, and consolidated control over a large area. Both states underwent revolutionary liberation movements in the 1960s. Army officers deposed the North Yemen king, while a Marxist faction helped force the British out of South Yemen and align it with the USSR.

Unification had been an abstract goal for North and South Yemen as early as peace negotiations following war in 1972. But it was only achieved with the end of international ideological support for communism as the Cold War ended in 1990. As a socialist state, South Yemen had maintained a social net for its population despite its poverty. But elites in both states were seduced by the political strength and wealth that unification could bring them. The more powerful Yemen Arab Republic, or North Yemen, led by President Ali Abdullah Saleh, ended up dominating politics and the economy. As van Veen argues, this led to the destruction of institutions that achieved social justice in the country, through business corruption and the unraveling of tribal legal and social mediation. These are merely local examples of the neoliberal project of crushing the welfare state and privatizing resources, which was occurring everywhere in the world at the time.

Saudia Arabia’s lack of success in actually retaking territory from the Houthi forces seems only to have increase the brutality of their violence.

The abandonment of the social contract led to protest and insurrection from many different Yemeni groups long before 2011. In the north, the Houthi movement has taken a more militant approach. This opposition group is led by members of the Houthi tribe, motivated to counteract social and economic marginalization in its region. But it also espouses a form of Zaydi Shiʿi political Islamism, spurred in part to reject the Sunni Salafi fundamentalism spread in the north with Saudi funding. The Houthis began a series of strikes against the Yemeni government in 2004, but it has only found success since the Yemeni military fell apart after 2011.

Southern separatists have coalesced in the Hirak movement, which has mostly expressed itself through protest and civil disobedience. A much more concerning trend has been the growth of Al-Qaeda in the Arabian Peninsula (AQAP) in the far southeastern deserts of Yemen, which has established local authority over some areas and recruited fighters for the Yemen and Syrian wars. An important part of their appeal, writes van Veen, are the resources they offer a deeply neglected part of the country. Unemployed young men receive recruitment packages of a rifle, a car, and $400 a month salary. The leadership has even been able to resolve long standing legal disputes between residents unresolved because of the breakdown of the legal system. But many in the U.S. military are unhappy that Saudi Arabia has effectively allied with Al-Qaeda in the fight against the Houthis.

The Saudi Hunt for Status

Why are these internal conflicts in Yemen important enough for Saudi Arabia to commit war crimes to determine their outcome? International Relations scholar May Darwich points out that the Yemen Civil War is the largest conflict in which the Saudi army has ever been involved. That involvement is not restricted just to bombing raids and naval maneuvers, but also to a sophisticated new political relations effort. The Saudi Ministry of Defense is now holding daily press conferences to shape the narrative of its role in the conflict, depicting itself as defending the legitimate Yemeni government and preventing the creeping spread of Iranian influence in yet another part of the world. But the connections between the Iran and the Houthi movement began in 2014 at the earliest and are too tenuous to represent a functional alliance.

Darwich asserts, rather, that this is the latest and strongest attempt by the Saudi state to defend its regional power and, most importantly, its prestige. The balance of power in the Middle East shifted after 2011 as political regimes surrounding Saudi Arabia crumbled. The Saudi monarchs defended their interests by backing anti-regime partisans in Syria, sending in troops to put down protests by the Shiʿi population in Bahrain, and loaning billions of dollars to Egypt, which had lost tourism revenue. It has effectively countered the influence of the Muslim Brotherhood, a rival political force in several countries. Yet, Darwich writes, Saudi Arabia has not received the diplomatic recognition and respect it believes it deserves. This is particularly the case with its long-term ally, the United States, which raised its ire when President Obama failed to intervene to defend Sunni insurgents after the Assad government used chemical weapons in Syria in 2013.

These trends have led Saudi Arabia from a traditionally cautious foreign policy stance to a more assertive one. The ascendancy of the first leader from a new generation of princes in decades, Crown Prince Muhammad bin Salman, has amplified this trend. Their lack of success in actually retaking territory from the Houthi forces after three years of fighting seems only to have increased the brutality of their violence toward the civilian population, which is actually majority Sunni Muslim.

It seems likely that the rise of right-wing politics around the world, including in the Trump administration, that regularly uses language dehumanizing its opponents has made the Saudi murder of Shiʿa “others” far easier. Rather than focusing on the sensational tabloid fodder of Trump’s scandals, the newsmedia would more effectively reveal the bankruptcy of this brand of politics by reporting this crisis and stressing the humanity of its victims.

Trend 3: The decline in social justice
By: Erwin van Veen
FROM THE STRUGGLE FOR CITIZENSHIP TO THE FRAGMENTATION OF JUSTICE, Yemen from 1990 to 2013, 2014
Clingendael Institute
The Saudi Intervention in Yemen: Struggling for Status
By: MAY DARWICH
Insight Turkey, Vol. 20, No. 2, THE GULF ON THE VERGE GLOBAL CHALLENGES AND REGIONAL DYNAMICS (Spring 2018), pp. 125-142
SET VAKFI İktisadi İşletmesi, SETA VAKFI 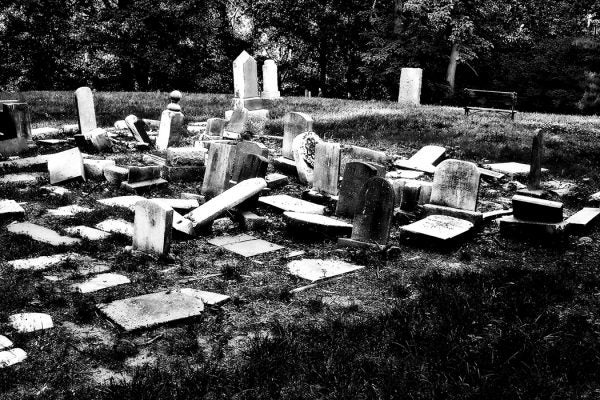