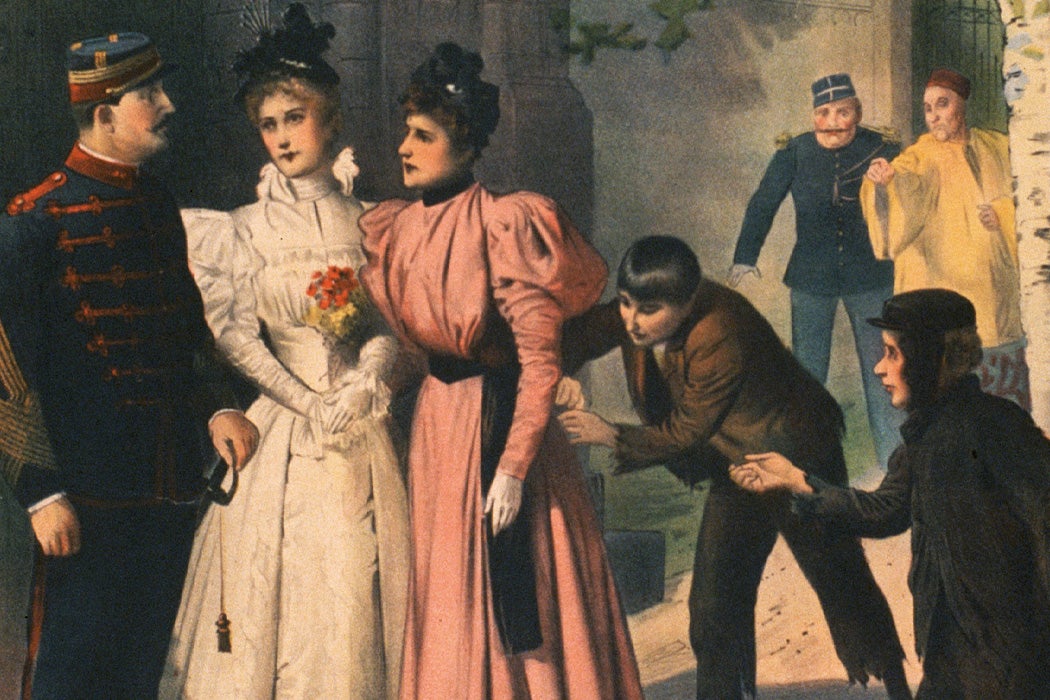 From a poster for Charles Frohman’s dramatic production, The Hand of Destiny by Pierre Decourcelle, 1896
via Wikimedia Commons
By: Amelia Soth
5 minutes
Share Tweet Email Print

It started with a book. In 1566, Thomas Harman’s A Caveat for Common Cursitors promised to unveil the hidden world of rogues and thieves. Harman asserted that these ne’er-do-wells communicated with each other in a secret language, known only to criminals: thieves’ cant. According to Harman, they used their secret tongue to plan burglaries and muggings in the earshot of upright folk, without fear of being caught. Now, for the first time ever, Harman would reveal this furtive tongue. With the help of his canting dictionary, even gentry cofes and gentry morts could cut whydds in the pedlar’s French. (Even respectable folk could speak thieves’ cant.)

Soon cant was everywhere. The secret tongue became common parlance. Copycat publications proliferated, complete with their own canting dictionaries. Playwrights put cant words in the mouths of their lowlife characters to lend them an air of authenticity.

Cant was a lawless language. If it got into your head, it might make you lawless, too.

A flim-flam authenticity, as it happens. Although the merits of Harman’s book are still debated today, most scholars agree that the cant language he purported to reveal was probably either pieced together from scattered slang or invented out of the whole cloth, and his lively tales of cunning knaves bear the unmistakable signs of being borrowed from jest books and folklore.

In the eyes of the law, canting was a sign of criminality, a way for thieves to plan ill deeds under the noses of the authorities without arousing suspicion. But it was also dangerous in another way. Its very nature posed a threat to law and order. Cant was believed to be entirely grammarless. This was both a reflection of its transgressive nature, and a threat to social order, as it was thought that the language you heard could have a powerful impact on your outlook and character. In the words of William Baldwin, “the minde followeth much the temperature of the body: and also the words are the image of the minde, so as they proceeding from the minde, the minde must needes be affected with the words.” Cant was a lawless language. If it got into your head, it might make you lawless, too.

Nonetheless, for bourgeois readers, thieves’ cant carried an unshakeable allure. It’s hard to imagine a more perfect encapsulation of this paradox than the subtitle of one of the copycat pamphlets that followed Harman’s: “The Devil’s Cabinet, Opened.” If canting was the devil’s cabinet, middle-class readers couldn’t help but peep inside.

What they saw was a lively, colorful parody of their own world. The authors of canting pamphlets spun out elaborate fantasies about a kind of anti-society of the ignominious, an upside-down mirror image of their bourgeois world. Just as polite society was populated with lawyers and doctors and merchants, the underworld had its own disreputable cast of “professionals:” rufflers, who pose as wounded soldiers for alms; moon-cursers, who lead wayward travelers into packs of rogues; and anglers, who dangle fishing lines through windows to yoink the sheets off of the beds without waking the householders.

As the character Moll Cutpurse, from Thomas Dekker’s The Roaring Girl, puts it:

I know they have their orders, offices,
Circuits, and circles, unto which they are bound,
To raise their own damnation in.

On being initiated into the canting society, rogues were said to swear a solemn vow: “I will not teach anyone to Cant, nor will I disclose ought of our mysteries to them, although they flaug me to the death.”

Was this fantasy of an anti-society of rogues and beggars a reflection of a failure of imagination on the part of the bourgeoisie? An inability to conceive of any way of life besides their familiar one, with its orderly ranks of professionals distributed in hierarchical guilds? Or was it a moral failure, an attempt to portray the disenfranchised in their society as cunning tricksters, who only pretended to be jobless, homeless, and starving?

Rogue literature imagined the itinerant poor as a nation within a nation, complete with its own language. They were no longer members of the same society as the middle-class gawkers who read about them. There was no need to feel any guilt or obligation towards people who, after all, had their own society, were employed (in a fashion), and only affected illness or disaster to beg. Many believed that rogues were all secretly rich and masters of disguise, able to appear if they pleased as sore-covered beggars or members of high society.

Meanwhile, the real poor were all around them, begging in the city streets or wandering from rural town to rural town, seeking desperately for a bit of paying work. Unemployment was high, and the government responded to the crisis by criminalizing poverty. The laws were incredibly harsh: the third offense for vagrancy carried a death sentence. The canting pamphlets played a role in that, by painting any impoverished person as suspicious.