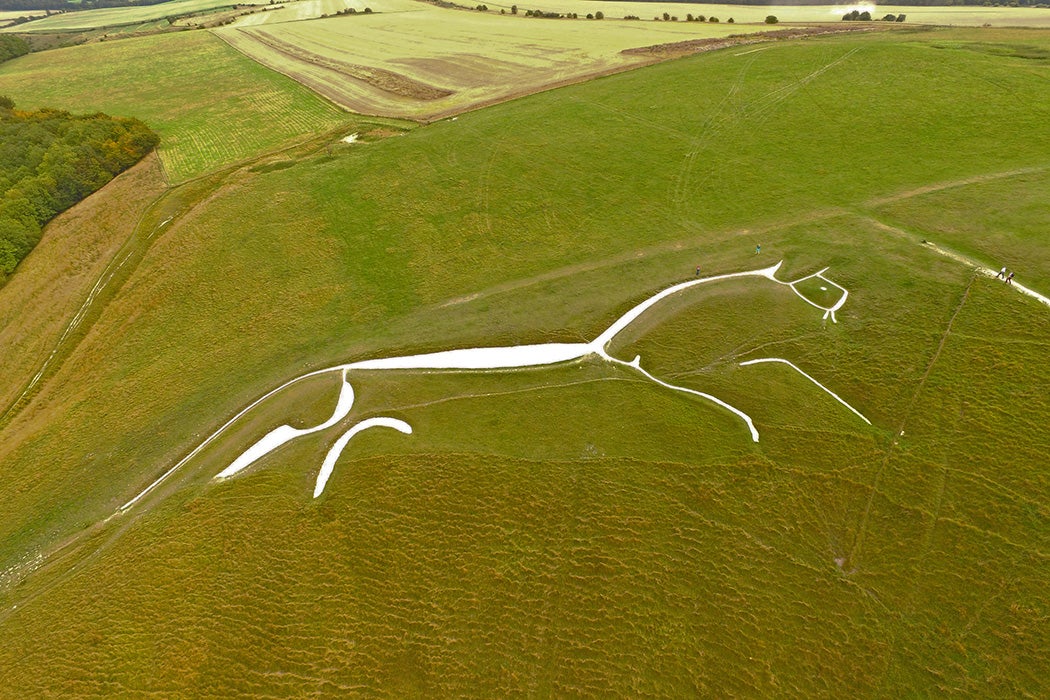 The White Horse of Uffington, a spectacular chalk figure on an English hillside, challenges the very idea of “heritage” as an unbroken line of descent. Made sometime between 1380 and 550 BCE by people who cut meter-deep trenches and filled them with chalk, the horse pattern should have disappeared under encroaching vegetation long ago. But it has been the work of generations to “scour” it—weeding, cleaning, and adding more chalk. It’s this tradition of scouring which so intrigues scholar Philip Schwyzer.

“Like other monuments of similar antiquity, the Horse has been the site of shifting and contested meanings,” writes Schwyzer. “Yet the White Horse is unique among such artifacts in that it has never been neglected, but has always possessed a real and active significance for the inhabitants of the immediate vicinity.”

The Horse’s meaning has been “closely linked to contemporary problems of identity—historical, national, religious, regional, and racial.”

In short, the White Horse is a collaborative work that may be as many as three thousand years old. People with no connection to the original builders, including the Atrebates (so named by Caesar), the Romano-Britons, the Saxons, centuries of Christians, and now the representatives of the English heritage bureaucracy, have renewed it over and over again. Today, the National Trust organizes the periodic scourings.

The Horse’s meaning has been “closely linked to contemporary problems of identity—historical, national, religious, regional, and racial,” since at least the late seventeenth century. That was when antiquarians started debating whether Celts or Saxons were responsible for it. There were other theories as well. For those in the Medieval period who saw the legendary Brutus of Troy as the first Briton, it was a Trojan horse. King Arthur was said to be buried in the nearby Dragon Hill, which was so named because St. George supposedly slew the dragon there. King Alfred, whose victory over the pagan Danes in 871 CE was another version of the foundation of England, was also long associated with it.

Already by 1100 CE, the White Horse (Albus equus) was listed among the wonders of Britain. Its antiquity wasn’t then understood—indeed, the current dating to the Late Bronze Age only comes from an Oxford Archeological Unit study in the last decade of the twentieth century. Using Optical Stimulated Luminescence Dating, which measured the last time the soil beneath the chalk was exposed to sunlight, they pushed the origin date back well beyond what people had long presumed

Since at least the twelfth century, writes Schwyzer, the “wonder of the Horse had less to do with its antiquity or the ingenuity of its makers than with its stubborn and remarkable survival.” He continues: “The endurance of the local custom has increasingly been seen as more wondrous and worthy of celebration than the hill figure itself.”

Schwyzer says that the “scouring itself has the capacity to serve as compelling emblem of the nation.” The author takes this as a definition of “English heritage:” preserving and restoring what others left behind.

In the act of “constant renewal” of these scourings, the past is both erased and reproduced. “To scour the White Horse” is to “assert the vitality of the nation-people in the present while reaffirming continuity with the moment of origin.” Or, as Tennyson put it in 1857: “Men weed the White Horse on the Berkshire hills / To keep him bright and clean as heretofore.” Schwyzer thinks that there’s less concern today about who built it than that it “be as old as possible, in order that its preservation may be the more impressive.”

Although older than England, older than “any conceivable historical identity” even, the White Horse is a paradigmatic piece of English heritage. It’s not the original makers, argues Schwyzer, but the way such works “are preserved for the present and future by conscientious scouring” that makes them “English.” He argues that such stewardship is the “opposite of a ‘historical identity’” rooted in specious racial and cultural myths—the kind so favored by ethnic purists and other fantasists. 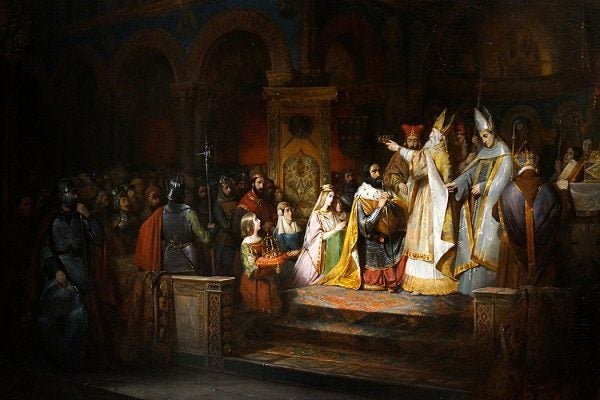 Making Sense of the Divine Right of Kings

The United States threw off the yoke of a king more than two centuries ago. Funny how we can't get enough of our erstwhile sovereigns today.