When Ferns Were All The Rage

Despite the jurassic-sounding name, pteridomania (from the Greek for fern, plant and mania) was responsible for the 19th century fern leaf collector’s job. 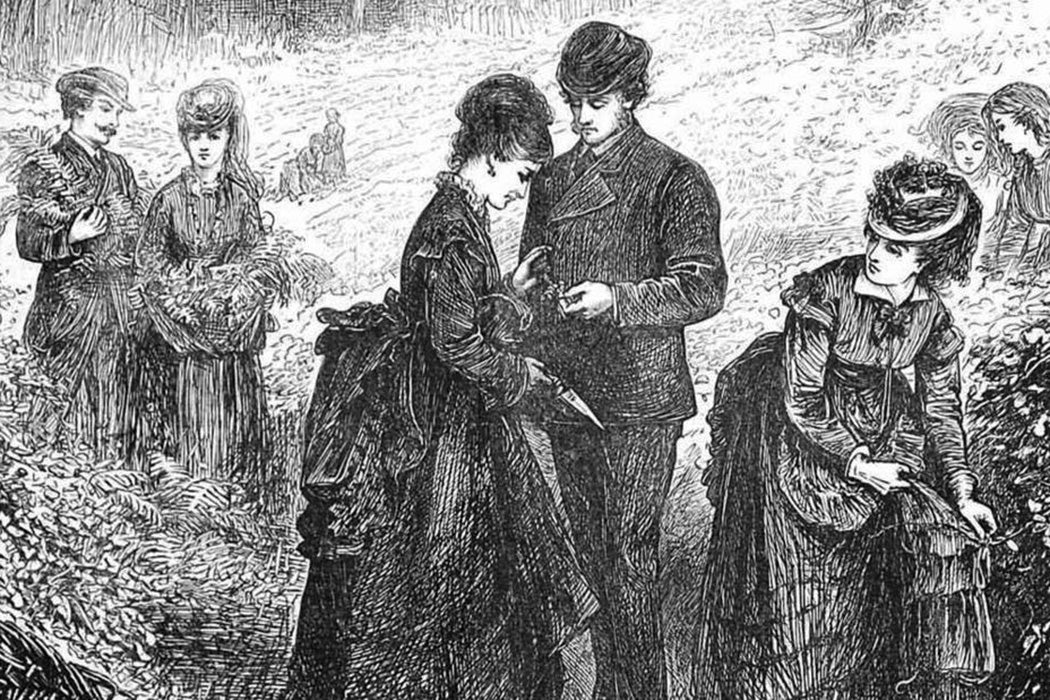 Every autumn, Victorians swarmed into the woods to collect ferns. From the 1850s until Queen Victoria’s demise, pteridomania (meaning “fern mania”) engulfed Victorians on both sides of the Atlantic. Almost every house had a potted fern. Those who could afford to, kept rare fern varieties “under the ample bell-glass, or in the Wardian case… to enliven the parlor window in the wintry season of the year.”  There were fern books, fern societies, and florists bulked out floral arrangements with ferns. Fern-collecting went beyond past-time to become an occupation.

In 1922, former Victorian fern collector Gustave Thommen gave a nostalgic account of his “business of collecting ferns” to the American Fern Journal, a magazine which was founded, unsurprising, during the heyday of pteridomania.

From July to October in New England, in early morning, “we went to the woods, where the ferns grew by the million, and simply picked what we wanted,” he said. Demand was so great that they formed into groups and brought assistants and picnic lunches, often not leaving the forest until evening. Each collector gathered between 50 and 100 fronds in his left hand, tied them into a bundle and then dropped the bundle into his basket. The assistant then exchanged this for an empty basket and transferred the gathered ferns into cases. In spring and summer they sold the ferns directly, but in autumn they stored the ferns for the winter market.

The day following autumn collecting, the fern leaf collector stacked his pteridophytes (ferns) into cold frames in out-houses or cellars. These formed his winter and spring stock. He then layered three inches of humid moss on top. As temperatures dropped, he added glass. When temperatures became even colder, he added boards, and finally two feet of leaves or hay. Every three weeks the collector would visit his stash and remove just enough to fill the wholesaler’s orders from retail florists.

By the time Thommen’s story was published, pteridomania had waned. Commercial collectors now did the collecting, and over-wintering was refrigerated and temperature controlled.  Loss, sometimes as high as 75%, fluctuated. Rather than investigate, wholesalers shrugged it off – ferns, it seems, was a speculative trade.

But the Victorian fern collector knew otherwise. Experience had taught him that loss went hand-in-hand with carelessness. Most loss was a result of rough handling at picking or even stepping on the ferns and bruising them. Ferns also rotted when their piles were too large and heat rose in the center, or due to frost or high ambient temperature during storage. These were things that could be prevented. “It seems funny, nobody seems to give this aspect even a thought,” Thommen reflected. The end of pteridomania brought the end of the occupation of fern-leaf collector. Without old sources like this 1922 journal, his expertise would also be lost.