When Death Was Women’s Business

In the 19th century, women called “watchers” tended to the dying and the dead. 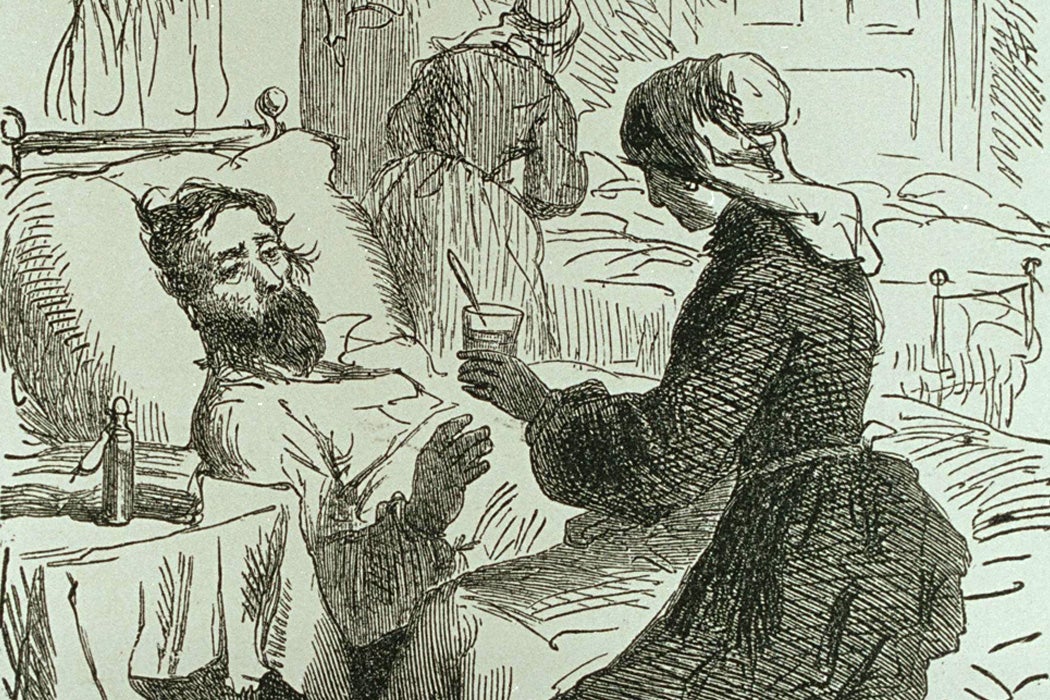 In recent years, many Americans have begun looking for new ways to approach death. The death-positive movement supports people who prefer to die at home, and even those who wish to care for the bodies of loved ones the way many families did before the rise of the funeral industry. Historian Karol K. Weaver took a close look at that earlier approach, studying the business of death in early nineteenth century Pennsylvania, when care for the dying and dead fell mostly to women.

In those years, Weaver writes, watchers or watch-women—sometimes also referred to with the more generic term “nurse”—tended to the dying. These might be friends, family members, or hired help.

The final and most important job of a watcher was to verify that her charge was dead, observing the cessation of breath and even shaking the body to be sure no life remained.

The watchers offered physical care and prayer, and organized visits by clergy and loved ones. Another important part of their job was observing the attitude of the dying person. If they could report a Good Death—characterized by courage and faith—it would comfort the other survivors. On the other hand, a Bad Death filled with struggle and pain could make for a cautionary tale aimed at the insufficiently pious.

Weaver writes that the final and most important job of a watcher was to verify that her charge was dead, observing the cessation of breath and even shaking the body to be sure no life remained.

Once the watcher’s work was done, “layers out of the dead” would wash, dress, and groom the body. They would also close the mouth of the deceased, using a tied cloth or a stick propped between the chin and breastbone, and use coins or other objects to keep the eyes closed. Layers out might also perform the skilled jobs that would later fall to undertakers, such as removing internal organs, blocking orifices, and slowing putrefaction by applying alum-covered cloth or filling body cavities with charcoal.

Like watchers, some layers out were unpaid family members or friends, but others were paid professionals. Looking at Philadelphia city directories from the early nineteenth century, Weaver found business listings for these women. Sometimes, they also advertised themselves as nurses or midwives—jobs that involved intimate care in a domestic setting just as laying out the dead did. Some listed themselves as “widows” in the directories. Weaver writes that this title suggested their connection with death and also explained the lack of a husband’s income that forced them to work for money.

Over the following decades, women’s death work declined. Increasingly, people died in hospitals rather than at home. With the Civil War came the need to transport Union soldiers’ bodies home, inspiring the rapid growth of undertaking as a business—often a father-and-sons affair. Now, families had a one-stop shop for coffin, burial plot, hearse, and the care and preservation of the body.

By 1867, the Philadelphia directory listed 125 male undertakers, one female undertaker, and four female layers out of the dead. The death industry as we know it today had been born.