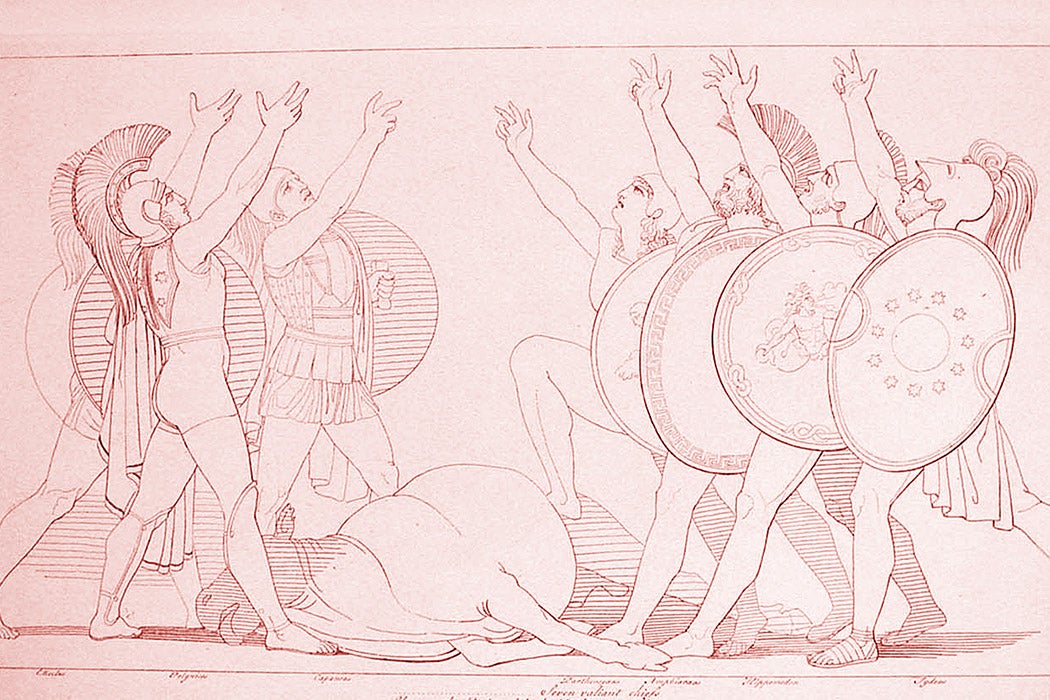 With national tragedies now as frequent and predictable as sunrises, no phrase has lost consolatory power more swiftly than “thoughts and prayers.” Although it is intended to “signal an authentic care for others,” this utterance has become so conventional that it’s hard even to imagine what the content of these prayers is supposed to be and what effect, if any, they are supposed to have in the world.

The answers to these questions may not arouse much concern in our increasingly secular age, but they mattered a great deal a few millennia ago when ancient Grecians routinely engaged in ritual acts of public petition to cleanse and protect their communities from violence within and without.

In fifth century BCE Greece, prayer was both public and formal, and none knew its pitfalls and subtleties better than the era’s great tragedians. This is especially true of Aeschylus, whose tragedy Seven Against Thebes, according to Eva Stehl, depicts a world in which “speaking is dangerously performative.” Set in the embattled city of Thebes shortly after Oedipus’s death, Seven Against Thebes begins with an invading army gathering at the city’s gates eager to conquer the city and dethrone its ruler, Eteokles. For all its banging of war drums, the play’s drama is contained not in violent or spectacular set pieces but in urgent dialogues between the chorus and Eteokles concerning how best to heal the city through divine petition.

Debates over public prayer in the face of impending tragedy form the dramatic core of Aeschylus’s Seven Against Thebes.

Throughout the play, the chorus—comprised entirely of young women—repeatedly attempts to engage in rituals of collective healing. These prayers, whose shape was governed by strict structural requirements, presented an argument to the gods explaining why they should grant the petition. Crucial to their success was whether or not they could sustain euphēmia (speech of good omen), since it was widely understood that this “kind of utterance” was the only kind “the gods should hear.” Ensuring euphēmia also meant keeping dysphemia (ill-omened speech) at bay. In Aeschylus’s drama, the chorus’s repeated attempts to utter a euphemic prayer are disrupted by the clanging spears outside the city walls as well as the frequent interruptions of Eteokles inside them.

Motivating Eteokles’s interjections is his dissatisfaction with the chorus’s petition, which eventually leads him to utter his own prayer. This intercession, however, is dysphemic, because it introduces into the world of the play the language of curses and the swirling, destructive energy they bring with them. Aeschylus and his audience would have understood that every curse is attended by a being known as an Erinys (AKA a Fury), which Stehl describes as a “concretization of the power of words.” Although his prayer is born of his need to preserve Thebes, Eteokles inadvertently condemns the city by inviting an Erinys into it. His tragedy, Stehl writes, is that “the more he attempts to pray and protect the city from ill omen, the more he alienates the gods.”

Debates over public prayer in the face of impending tragedy thus form the dramatic core of Aeschylus’s Seven Against Thebes. The play treats the power of words—especially those directed to on high—with the utmost seriousness. Once uttered, they assume a life of their own, capable of bringing great comfort as well as causing tremendous pain. And their power, Aeschylus reminds us, cannot be contained, as evidenced by the fact that Eteokles’s attempt to police “performative speech endangers the city.”

In our own moment, the rote public invocations of “thoughts and prayers” which flood our literal and metaphoric airways after a tragedy say little about what public prayer is supposed to do and give even less credence to what effect it is supposed to have. But the content of our speech matters, Aeschylus would say, for one wouldn’t want to let an Erinys loose by mistake.

How to Do Things with Prayer Utterances
By: Shane Sharp
Symbolic Interaction, 36.2 (2013): 159-176
Wiley on behalf of the Society for the Study of Symbolic Interaction
Prayer and Curse in Aeschylus’ Seven Against Thebes
By: Eva Stehle
Classical Philology, 100.2 (2005): 101-122
The University of Chicago Press

Can Thucydides Teach Us Why We Go to War?

A contemporary scholar uses the ancient Greek historian to explain the 1968 Pueblo Crisis in North Korea.