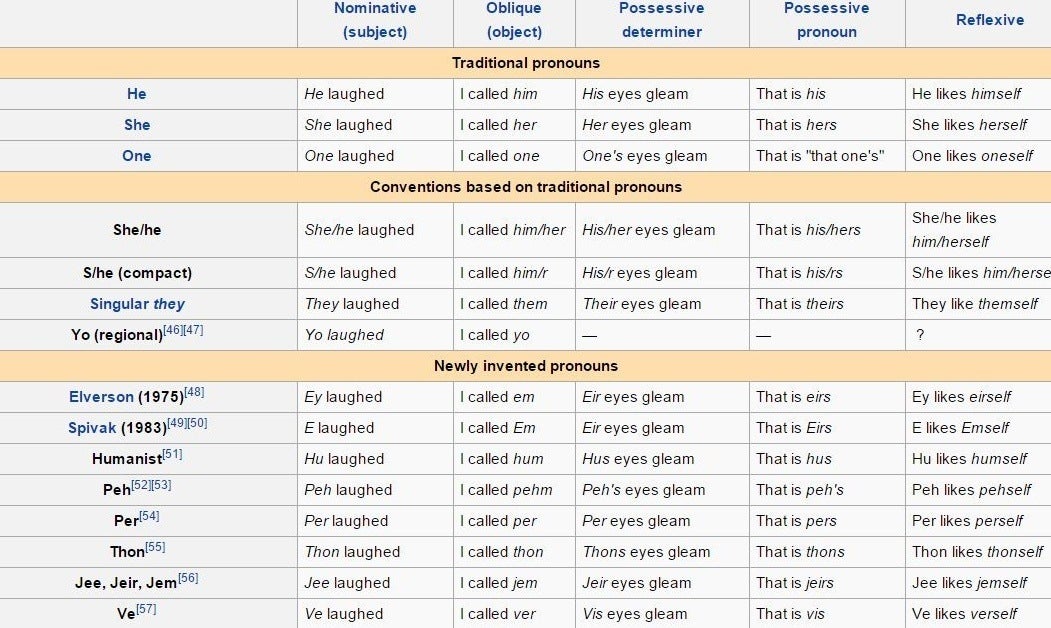 Transgender and genderqueer issues have been in the focus of mainstream media attention as of late. Most recently, Caitlyn Jenner, former Olympian and reality TV personality, has publicly announced an identity as a trans woman. This story has pushed debate and conversation on gender identity to the forefront of public consciousness.

One linguistic consideration of gender identity is the choice of pronouns to refer to a person who may be transitioning, or who presents an undetermined or neutral gender. This is sometimes referred to by the umbrella terms genderqueer or gender-nonconforming. The Silvia Rivera Law Project defines the term gender-nonconforming to refer to “people who do not follow other people’s ideas or stereotypes about how they should look or act based on the female or male sex they were assigned at birth.”

With the ongoing debate on gender issues reaching the mainstream, it’s now more obvious than ever that a gender neutral approach to pronouns is needed. Is there a linguistically natural way to be pronominally inclusive of all groups in English? There have been a myriad of different proposals for invented pronouns to cover this gender neutral need.

One of the earlier pronominal neologisms, according to Dennis E. Baron in The Epicene Pronoun: The Word That Failed, is thon (possessive thons), formed by a blend of that one in 1884, which was well-known enough to appear in the Funk and Wagnalls Standard Dictionary by 1898. But you probably wouldn’t hear it bandied about very often these days. Like thon, other invented pronouns suggested over the years have been limited in their usage. This might partly have been because though there was a definite need for an epicene pronoun, with the generic he becoming increasingly problematic, there was no groundswell of urgency from a gender identity perspective until recently. However, we’ve seen before how playful internet neologisms can be widely used and spread by speakers, so why the skepticism over a few brand new pronouns? To put it simply, it’s rare and difficult for new items to enter the closed class of function words in English—the words that exist for syntactic functions, such as pronouns, as opposed to the open class of content words that convey some semantic meaning, such as nouns.

To put it simply, it’s rare and difficult for new items to enter the closed class of function words in English—the words that exist for syntactic functions, such as pronouns, as opposed to the open class of content words that convey some semantic meaning, such as nouns.

This brings up the thorny question of which gender-obscured pronouns are likely to be widely adopted, particularly in languages like English that have historically treated masculine pronouns as default or generic. What’s the solution? Could newly-coined gender neutral pronouns ever really flourish in the language, regardless of whether their use is officially mandated or not? Sweden recently attempted the feat of officially pushing for the gender neutral pronoun hen in Swedish, with some success.

Complex issues of gender identity aside, many armchair language prescriptivists may be thinking, will no one think of the pronouns? Will gender identity politics ruin pronouns forever?

For a multitude of reasons, having access to a set of gender neutral pronouns in a language can be useful, not just for gender expression and identity but also to avoid sexist or non-inclusive language. In fact, the majority of the world’s languages already use pronouns that don’t specify gender and seem to get on fine. In certain cases specifying a gender is unnecessary and perhaps even distracting. Take note of the following sentences from Baron:

In this day and age, is sentence 3, the example with the so-called generic he, really less odd to read than the unwieldy version in sentence 2? What if it was “everyone loves xyr mother” as the Vancouver School Board might have it?

It’s certainly useful to have a gender neutral pronoun but it’s even more useful if speakers of the language actually make use of these pronouns. Studies on French and Arabic and Hebrew speakers have shown how speakers make use of existing linguistic approaches to convey gender neutral cases. Amalia Sa’ar’s 2007 study discusses how women in Israel are subconsciously using masculine pronouns to refer to themselves, regarding them as gender neutral. “In Hebrew and Arabic, for example, it is very common to hear expressions as intimate and feminine as “when you♂ become♂ a mother” (Hebrew Kesheʿata nihya ʿima) … (the symbols ♀ and ♂ are used to designate feminine and masculine grammatical gender, respectively) uttered in masculine form by women.

On the surface, this sounds like how the generic he might have once been used in English. While there is a robust history of the generic he being used in English, it’s debatable whether it has ever been used in a similar vein to refer to only women. Has a sentence such as “Everyone is nervous when he becomes a mother for the first time” ever really been acceptable as a generic?

Then there is always the elephant in the room, as shown by sentence 1. There’s the widespread and organic use of singular they as a fairly serviceable gender neutral pronoun, which nevertheless seems to encounter resistance from grammatically concerned speakers, despite a long history in literature. Before the generic he was even a glint in an eighteenth century grammarian’s eye, there was a generic, singular they, famously used by those literary hacks, Geoffrey Chaucer, William Shakespeare and Jane Austen, among others. Its common usage in literature shows that it isn’t actually as ungrammatical as it’s been accused of being.

According to Baron, “the absence in English of a third-person, common-gender pronoun became apparent when grammarians in the eighteenth century began objecting to the apparently widespread use of they, their, and them with singular, sex-indefinite antecedents on the grounds that it violated number concord.” (Funnily enough this number agreement violation seems not to have been quite so confusing in a case like the pronoun you, which started out as a plural pronoun before also becoming a grammatically acceptable singular form). Furthermore, “generic he was actually given the force of law when, in 1850, the English Parliament passed ‘An Act for shortening the language used in acts of Parliament,’ which ordered ‘that in all acts words importing the masculine gender shall be deemed and taken to include females, and the singular to include the plural, and the plural the singular, unless the contrary as to gender and number is expressly provided’“. So even generic he, much like a newly coined pronoun, needed an official boost.

Even generic he, much like a newly coined pronoun, needed an official boost.

Regardless of whether some speakers find it awkward or ungrammatical for prescriptivist reasons, the fact is the singular they is being used more or less naturally as a generic, gender neutral pronoun as it has been in the past, according to Julie Foertsch and Morton Ann Gernsbacher’s 1997 study on the subject, which found that “reading-time experiments demonstrated that singular they is a cognitively efficient substitute for generic he or she, particularly when the antecedent is nonreferential.” This suggests that the use of singular they is already considered a default by English speakers and passes as generic without too much difficulty in comprehension.

They/them is being widely used by many genderqueer people as their preferred pronouns (sometimes even with a singular reflexive variant “themself” being used), as well as by speakers who simply don’t wish to specify gender for a variety of reasons. So, though it may not be a perfect solution for some, the singular they is here, it’s genderqueer, so get used to it.

In Search of Gender Neutrality: Is Singular "They" a Cognitively Efficient Substitute for Generic "He"?
By: Julie Foertsch and Morton Ann Gernsbacher
Psychological Science, Vol. 8, No. 2 (Mar., 1997), pp. 106-111
Sage Publications, Inc. on behalf of the Association for Psychological Science
The Epicene Pronoun: The Word That Failed
By: Dennis E. Baron
American Speech, Vol. 56, No. 2 (Summer, 1981), pp. 83-97
Duke University Press
Masculine Talk: On the Subconscious Use of Masculine Linguistic Forms among Hebrew‐ and Arabic‐Speaking Women in Israel
By: Amalia Sa’ar
Signs, Vol. 32, No. 2 (Winter 2007), pp. 405-429
The University of Chicago Press
On the Use of ils for elles: Gender Syncretism in the History of French
By: Barbara E. Bullock
The French Review, Vol. 74, No. 4 (Mar., 2001), pp. 700-709
American Association of Teachers of French 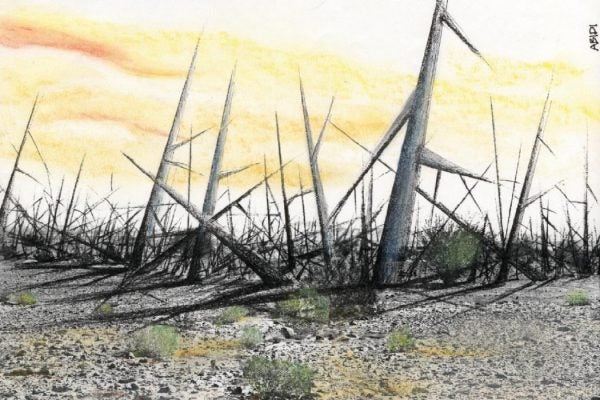 Will Art Save Our Descendants from Radioactive Waste?

What if the great threat to human life isn't a bomb dropping down from above but radioactive waste creeping up from below? Will art come to our rescue then?