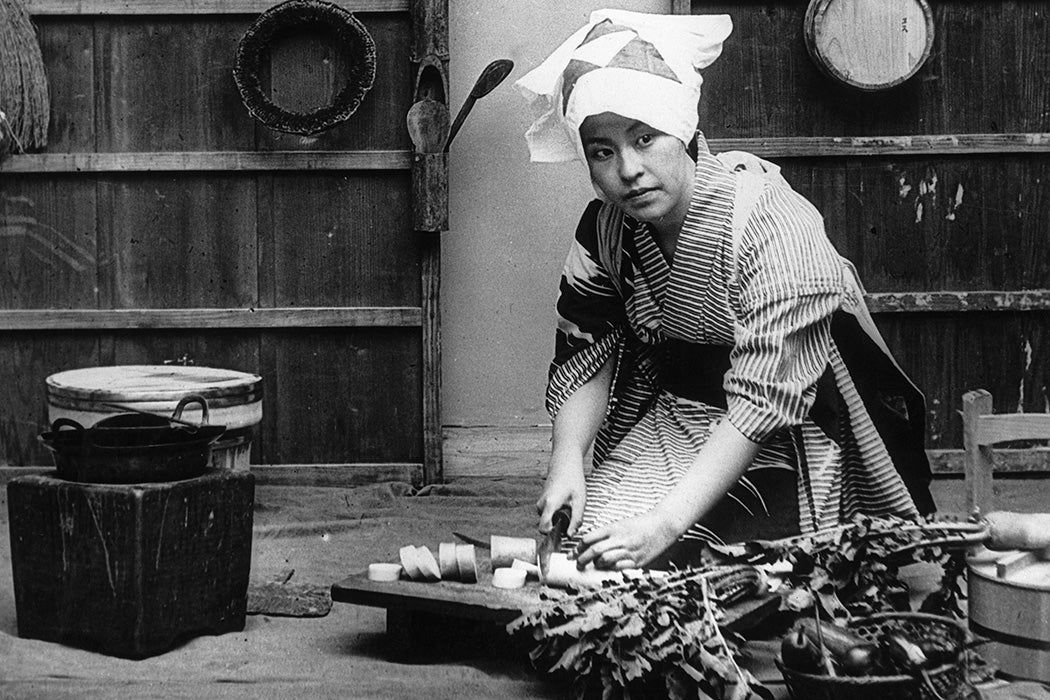 In the wake of World War II, a group of white women was brought to Japan to “liberate” its women. They spoke little or no Japanese and didn’t know much about the country. But these “occupationaires,” as they were called, had a tall mandate: Set Japanese women free by introducing them to the American way of life. Michiko Takeuchi explores the work of these women, who colonized Japanese kitchens even as they themselves defied their mission.

The occupationaires were members of the US Women’s Army Corps (WAC), and the country they encountered in 1945 was literally in ruins. Years of ruthless Allied bombings had taken their toll, and up to 3.1 million Japanese people had died both in battle and on the homefront. Poverty and homelessness were rampant. Not least, the country was reeling from the devastation of two atomic bombs.

Kitchens would be the battlefront in this new war.

In contrast, the occupationaires brought with them tales of a completely different world, of plenty and prosperity. And they promoted American-style domesticity as a way for occupied Japan to flourish. This held “a powerful appeal to starving, war-weary Japanese,” Takeuchi writes.

Kitchens would be the battlefront in this new war. The occupationaires used media and rejiggered home economics programs in the Japanese school system to encourage Japanese women to embrace American kitchens and American-style domesticity. Takeuchi tracks what she calls a “kitchen frenzy,” which spawned thousands of postwar magazine articles. Occupationaires worked directly with the Japanese media to place articles featuring American-style kitchens, sparking envy and admiration among Japanese women.

Images of modern kitchens and the prosperous, well-fed women who cooked in them served many purposes, writes Takeuchi: They reminded Japanese people who had won the war and even served to explain the loss. Japanese kitchens, which contained wood-fired stoves, were presented as inferior and inefficient—a symbol for the inefficiency and inferiority that the American occupiers implied had caused Japan to lose the war.

But though occupationaires pushed a narrative of happily domestic housewives, they themselves broke that mold. Most were single; all lived outside of their home country and worked. Unlike their male counterparts, their military jobs were in jeopardy as the United States demobilized after World War II. Becoming an occupationaire was a way of seizing an opportunity they would have lacked at home. “For American women,” writes Takeuchi, “remaining single and working in the occupation in Japan was their way of challenging the emerging ideal of domesticity at home.”

The Allied occupation of Japan ended in 1952. By then, Japan was on the brink of what would be called an economic miracle. Though about half of Japanese women had worked in industries like farming at the end of World War II, they were largely driven out of the workforce in the postwar period. To survive economically, writes Okajima Kaori, they were forced to become stay-at-home wives. The American-style domesticity imported by the occupationaires left lasting marks on Japanese society, and today Japanese women spend an average of nearly four hours a day performing unpaid domestic labor in their homes—compared to just forty minutes for Japanese men.

Cold War Manifest Domesticity: The "Kitchen Debate" and Single American Occupationnaire Women in the U.S. Occupation of Japan, 1945–1952
By: Michiko Takeuchi
U.S.-Japan Women's Journal, No. 50 (2016), pp. 3-28
University of Hawai'i Press on behalf of International Institute of Gender and Media