The Radicalism of Johnny Cash

The best-selling musical artist in the world in 1969, Johnny Cash sang of (and for) the “forgotten Americans”: the imprisoned men of all races. 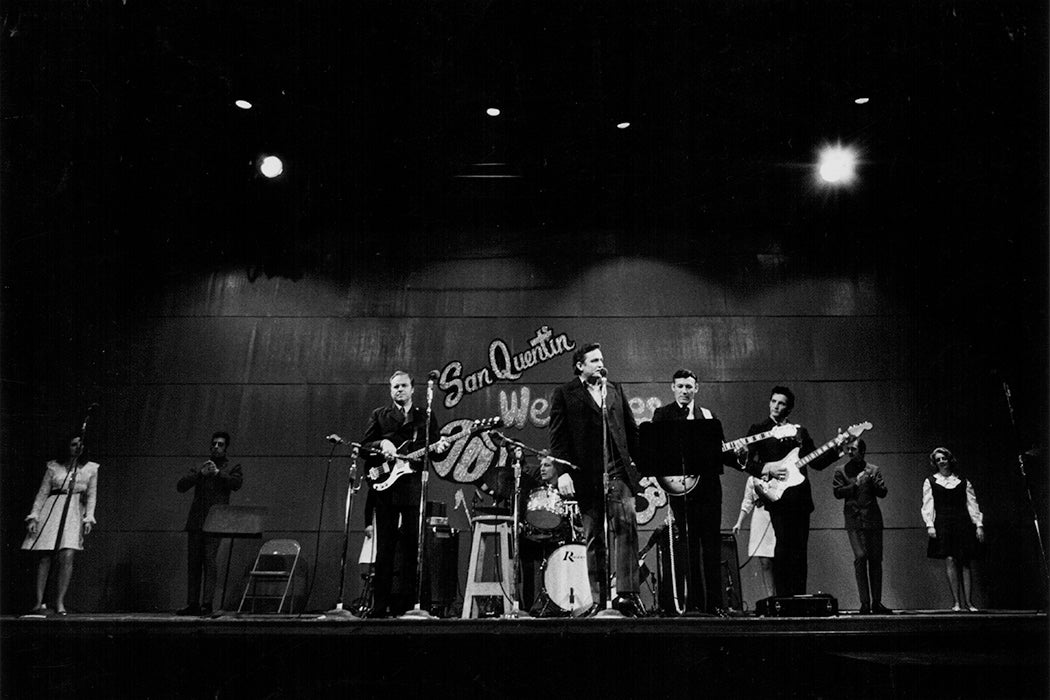 When Johnny Cash performed at California’s San Quentin State Prison in 1969, he introduced a new song by explaining to his audience of imprisoned men: “I tried to put myself in your place and I believe that this is the way I would feel about San Quentin.” Then, to applause, yells and whistles, he sang “San Quentin, you’ve been living hell to me… San Quentin, may you rot and burn in hell.”

Historian Daniel Geary writes that Cash’s identification with prisoners flew in the face of a popular conception of country music in the late 1960s. At the time, a significant bloc of white, working-class voters had begun shifting from the Democratic Party to the Republicans. Country musicians like Merle Haggard contrasted “heartland” values with countercultural drug use and opposition to the Vietnam War. (Haggard had stumbled on this formula, writing “Okie from Muskogee” as a satire which fans unexpectedly took seriously, leading him to a successful career singing hippie-punching songs.)

“The albums demanded that listeners place themselves alongside the prisoners as an audience for Cash’s music.”

The country genre rapidly became associated with New Right politics that combined evangelical Christianity, law-and-order rhetoric, and the glorification of white southern culture. In 1971, columnist Kevin Phillips wrote that many Americans “are evidently finding the ‘straight’ songs and lyrics of country music preferable to the tribal war dances, adolescent grunts, and marijuana hymns that have taken over so many pop stations.”

But, Geary writes, things were never so simple. Cash, the best-selling musical artist in the world in 1969, had a longstanding interest in the lives of people on the wrong side of right-wing carceral politics. In 1968, he recorded the hugely successful live album At Folsom Prison, followed the next year by the San Quentin live album.

“The albums demanded that listeners place themselves alongside the prisoners as an audience for Cash’s music,” Geary writes. “The records’ distinctive sound came not only from the live recording of Cash and his band, but also from Cash’s banter with prisoners and—most of all—the enthusiastic responses of prisoners to songs intended to express their conditions.”

Like New Right politicians, Cash focused on “forgotten Americans,” imagined as male, blue-collar workers. But, in contrast to the implicit whiteness of the New Right’s ideal Americans, the imprisoned men in Cash’s audiences were of all races, as the photographs included with the LPs demonstrated. And in his songs the enemies of these men were not liberal elites but prison officials, the wealthy, and government leaders with no concern for those in prison. In 1972, he testified before Congress about improving prison conditions and reevaluating long sentences.

Overall, Cash’s politics were hard to pin down as either left or right. He didn’t explicitly speak out against racism or the Vietnam war. Citing historian Michael Foley, Geary writes that “Cash’s political significance lay not in an particular ideological stance he adopted, but rather in his broader ‘politics of empathy’ that allowed him to bond with and articulate the feelings of working-class Americans.”

"The Way I Would Feel About San Quentin": Johnny Cash & the Politics of Country Music
By: Daniel Geary
Daedalus, Vol. 142, No. 4, American Music (Fall 2013), pp. 64-72
The MIT Press on behalf of American Academy of Arts & Sciences