The Plight of the Hunter

Seeking buried treasure has long been an American pastime, but its the failure to find the gold that keeps the hunt—and the story—alive. 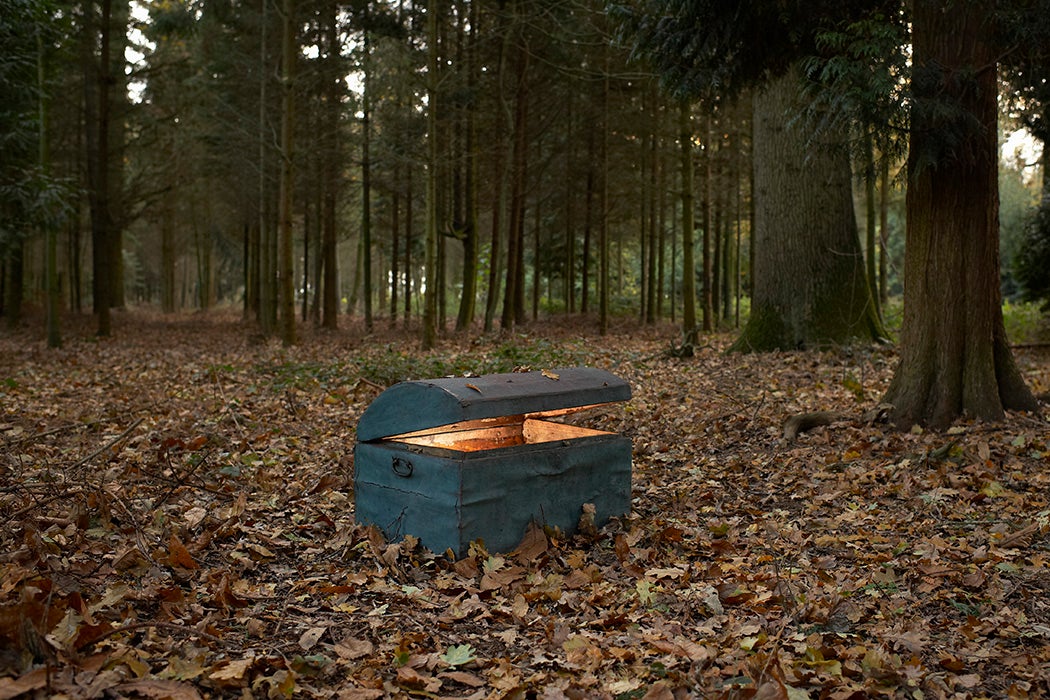 According to folklorist Gerard T. Hurley, “people like the idea of something for nothing, and enjoy talking about fellow men who receive, or almost receive, a very great deal in exchange for a modicum of ingenuity.”

But Jack Stuef doesn’t see it that way. Getting something for nothing doesn’t necessarily lead to enjoyment.

“The moment it happened was not the triumphant Hollywood ending some surely envisioned; it just felt like I had just survived something and was fortunate to come out the other end,” he admits. Not exactly the words you’d expect from someone who’d just discovered the infamous and elusive Fenn treasure—a buried chest full of items worth at least one million dollars.

Leaving clues to its whereabouts in a cryptic poem, Fenn launched a hunt that would last a decade.

Stuef’s find was hidden by art dealer Forrest Fenn. Faced with what he thought was a terminal cancer diagnosis, Fenn decided to bury a cache of jewels and gold in the mountains north of his Santa Fe home in 2010. Leaving clues to its whereabouts in a cryptic poem, Fenn launched a hunt that would last a decade. And though his treasure was eventually found, it wasn’t without conspiracies, controversy, and tragedy; there have been several lawsuits since its discovery, and five people died searching. But these stories of hidden riches carry from generation to generation, making them “one of the most widespread forms of folklore in America,” according to folklorist Patrick B. Mullen.

The treasure tale reinforces the idea of “unlimited good,” Mullen writes. This idea supports the worldview that “there is no real limit as to how much of any one commodity can be produced.”

As Mullen explains, it’s a very American idea—that with hard work, anyone can do anything. You want that treasure? Go out and get it. This creed “relates abundance to themes of achievement and competition,” Mullen writes. And while this idea is steeped in American culture, there’s also a less sociological reason— treasure hunting was, at one point, a thriving industry.

As historian James Miller observed in 1985, “Thousands of people spend their free time reading about treasure, hunting for treasure, and dreaming of finding treasure.” At the time, there were magazines, treasure books and maps, and advertisements for various ways to find treasure from the scientific, like metal detectors, to the more vibes-based dowsing. Those magazines had ads screaming “Psychic Forecast Lucky Lottery Numbers” and “Become a Bounty Hunter,” but they also contained some of the standard structures that define treasure hunting stories.

Hurley studied 250 treasure stories and identified their three main characteristics. First, they needed to be told as true stories; they have to include a treasure that someone could find. No “once upon a time”; they need “the same sense of literal truth that marks newspaper accounts of actual recovered gold.”

Second, the stories need to include (approximately) where the treasure is hidden and why—and this needs to be intriguing. As Miller clarifies, “Either valuables were lost, as in a shipwreck, and have not been recovered, or something was hidden by a person who happened to die before recovering it.”

This defeat at the end is what keeps people searching, keeps the stories alive. “They are certain about the difficulties in finding [the treasure],” Mullen writes. “But there is a possibility that it is still there.”

And possibility is all you need. As Miller writes, “people will continue to be delighted to dig up from the top twelve inches of the earth’s surface what others have lost.”