The Mediums Who Helped Kick-Start the Oil Industry

Apparently some people communed with spirits to locate the first underground oil reserves. 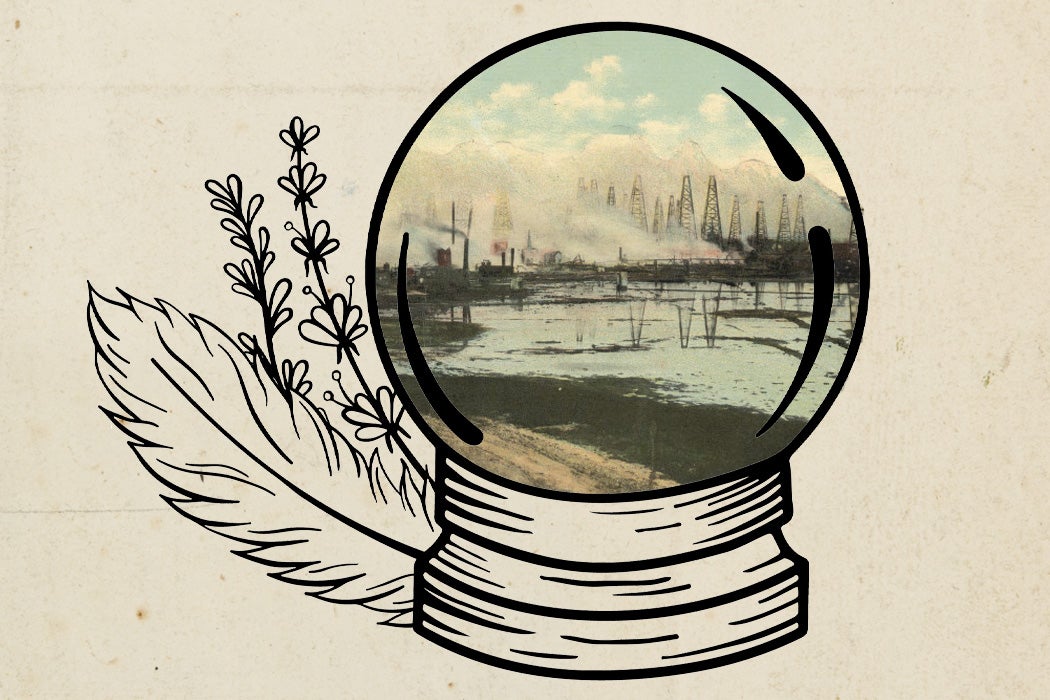 In the 1860s, the petroleum industry was in its infancy. As with the gold rush, hordes of inexperienced prospectors tried to strike it rich. But according to oil historian Paul H. Giddens, they didn’t trust scientists to tell them where to drill. The few professional geologists who tried to use “scientific means” to locate wells were “regarded as quacks” by the practical oilmen.

That’s right—skeptical oilmen didn’t trust the eggheads, so they turned to diviners, mediums, and spiritualists. As Zuck writes, these people utilized “trick guessing, superstitious devices, and spiritualistic means” to sniff out oil—sometimes literally, as with “oil smellers” (who did exactly that).

Mediums used a variety of other divinatory methods, too, including dream interpretation and dowsing rods. These rods, y-shaped twigs made of witch hazel or peach-tree wood, quickly became the most acceptable form of well location. A medium would grip the wood, passing around the property. “A swift downward dip of the wood, often imperceptible to the naked eye, would show where one should locate a well,” writes Zuck.

There were also more elaborate oil-finding devices, like the doodlebug, which “consisted of bells, whistles, and dials attached to a large black box that a man operated while seated and covered with a shroud.” Four men were needed to carry the medium—and his device—around prospective oil fields.

One of the most famous “Oil Wizards” of the time was Abraham James, a mysterious figure who used his psychometric powers to place the Harmonial well in Pennsylvania. It was a well-known tale, according to Zuck:

James was forcefully possessed by his spirit-guides and conveyed out of the buggy and over a fence on the east side of the road. He did not know if he was “in the body or out,” and was moved around a field and thrown violently upon the ground. James then stuck a penny into the ground and fell into a “psychometrical condition,” during which “Indian spirits controlled his body mechanically, while wisdom spirits induced the trance condition.”

The spirits communicated that James was standing on an immense oil deposit. Harmonial No. 1 was sunk on that exact spot. And, just as the spirits predicted, the well struck oil.

These enterprising mediums often claimed to channel the “spirits” of Native Americans (sometimes they even “communed” with specific historical figures, like the Shawnee chief Tecumseh). Zuck argues that this fit neatly within the American myth of Manifest Destiny, as “the oil fields were constructed as a new kind of frontier, where once again Native people were imagined to pave the way for white ‘progress.'”

By the early 1900s, professionally trained scientists were allowed into the oil industry. Petroleum geology established itself as a reputable discipline. Nowadays, writes Zuck, “Abraham James [has been] recast as an object of derision and a curious relic of a bygone era.”

This erasure wasn’t an accident: “In an attempt to distinguish the modern ‘scientific’ oil industry from its chaotic and superstitious beginnings,” Zuck observes, accounts of the early oil industry spent decades quietly reframing these practitioners of divination “as an amusing, if somewhat embarrassing, anomaly.”

One Hundred Years of Petroleum History
By: Paul H. Giddens
Arizona and the West, Vol. 4, No. 2 (Summer, 1962), pp. 127-144
Journal of the Southwest
The Wizard of Oil: Abraham James, the Harmonial Wells, and the Psychometric History of the Oil Industry
By: ROCHELLE RAINERI ZUCK
Journal of American Studies, Vol. 46, No. 2, Oil Cultures (May 2012), pp. 313-336
Cambridge University Press on behalf of the British Association for American Studies