The Myth of Manifest Destiny

Not everyone in the nineteenth century was on board with expanding the territory of the US from coast to coast. 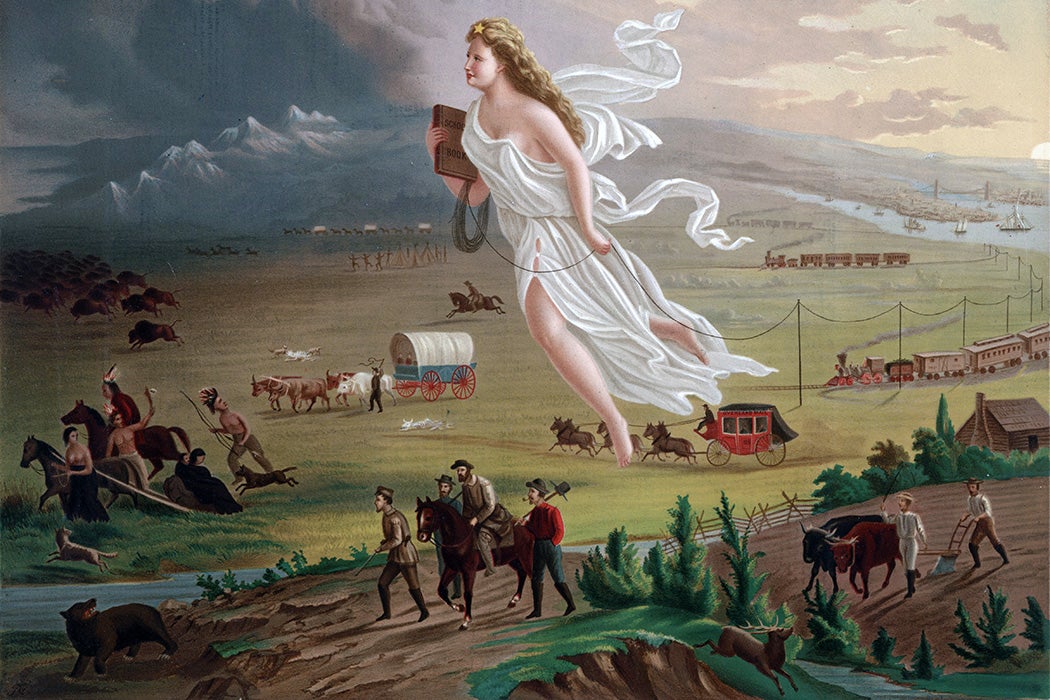 In high school history class, you might have learned that US leaders and citizens in the nineteenth century believed in “Manifest Destiny,” the inevitable extension of national power across the continent. From that perspective it might look like the destruction of Native nations, the establishment of the western states, and the creation of the US as we know it was almost inevitable. But, as Andrew C. Isenberg and Thomas Richards Jr. write, that’s not really how it looked to a lot of people at the time.

The first known use of the phrase appeared in 1845, as part of a pitch for the annexation of Texas. Newspaper editor John L. O’Sullivan wrote of the “manifest destiny to overspread the continent allotted by Providence for the free development of our yearly multiplying millions.”

“Mid-century U.S. authorities anticipated that native peoples would remain powerful geopolitical players in the West for the foreseeable future.”

But, Isenberg and Richards write, this was not conventional wisdom at the time. Just ten years earlier, former President John Quincy Adams had warned that any conflict with Mexico would be chancy, particularly given the likelihood that Native American nations and enslaved people would ally with the other side. Many US leaders also opposed President Andrew Jackson’s Indian removal policy, not for humanitarian reasons but because, as a writer for the Arkansas Gazette put it in 1839, “the policy of concentrating on our borders large bodies of armed and hostile Indians, smarting under a sense of recent injury, was generally supposed to be rather dangerous to the quiet of the frontier.”

“Mid-century U.S. authorities anticipated that native peoples would remain powerful geopolitical players in the West for the foreseeable future, and the long-term solution to their presence was not removal but a chain of forts that would protect the western frontier,” Isenberg and Richards write.

Looking back, we might think that believers in aggressive expansion got their predictions right. But, Isenberg and Richards point out, they didn’t have one unified vision. In 1812, Thomas Jefferson described the potential for white settlers to form a western “independent empire” of “free and independent Americans, unconnected with us but by the ties of blood and interest.” In 1845, Daniel Webster similarly predicted the rise of a “great Pacific Republic” in Oregon. Others saw Oregon as a likely place for the US to send its “rogues and scoundrels.” And O’Sullivan’s words sound less prophetic when you realize that he believed the US would annex not just Texas but Canada.

While US control of the West accelerated after the Civil War, history textbooks included little about western expansion until around 1885. It was only after the nation had taken roughly the shape it has now that it began to seem like everyone had expected that to begin with.

The story of the 1890 massacre was often about the end of Native American resistance to US expansion. But that’s not how everyone told it.