The Occult Remedy the Puritans Embraced

Why did the Puritans embrace a medical treatment that looked suspiciously like black magic? 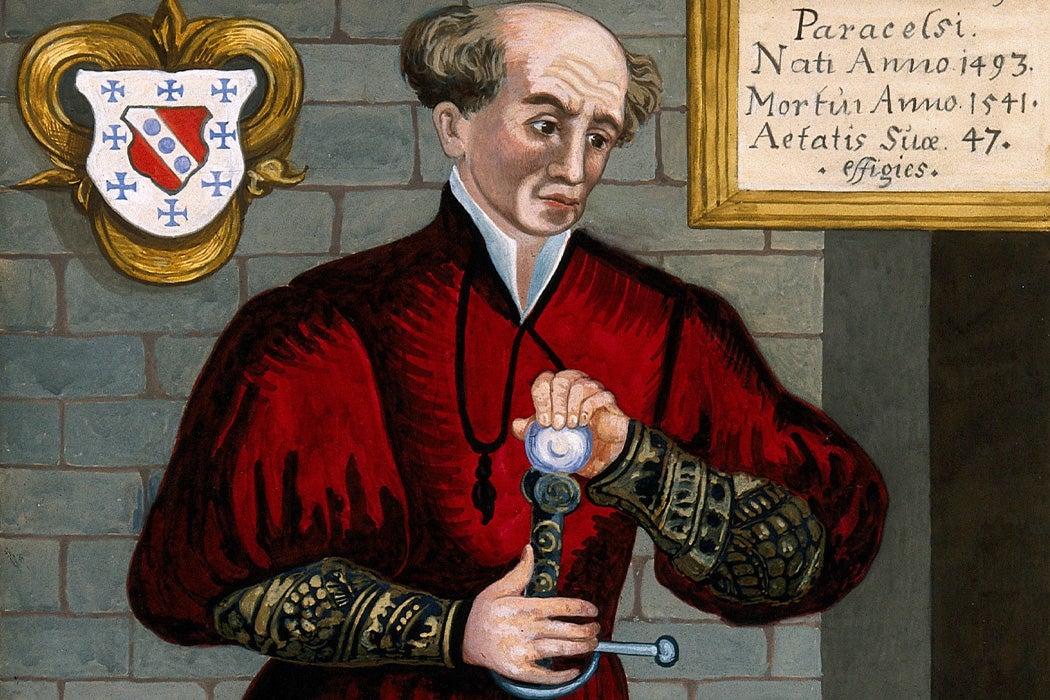 The world is full of occult sympathies. Needles magnetized from the same lodestone, miles apart, spin and point to the same letter. The wounds of a murdered body bleed when the killer walks into the room. And two writers at the same publication decide to write articles about the same obscure seventeenth-century medical remedy in the same week.

If you haven’t read Matthew Wills’ article about the weapon-salve, go check it out right now. Then join me again, and we’ll talk about how this seemingly magical potion of skull-moss and bear fat came to be embraced by history’s most famous buzzkills, the Puritans.

Paracelsus believed in an interconnected universe.

To review, in the seventeenth century, doctors began to treat wounds by rubbing salve on the weapons that caused them. This weapon-salve treatment was based on the idea of universal sympathy, the theory that the crust of blood on the blade bore a sympathetic connection to the patient’s open wound.

But here’s the oddest part: the weapon-salve wasn’t some relic of ancient superstition. It was, in fact, the cutting edge of medicine at the time. To understand why, you’ll have to take a look at the work of the man whose medical innovations inspired the treatment: Paracelsus.

Paracelsus, born Theophrastus Aureolus Bombastus von Hohenheim, was a medical iconoclast. He studied to be a doctor at the university, but he quickly grew fed up with the ivory tower of academic medicine and went wandering, studying with folk healers. He learned more, he said, from “old wives… sorcerers, wandering tribes, old robbers, and such outlaws” than he did from his professors.

For centuries, physicians had been guided by the works of Galen, who argued that healing was a matter of restoring balance: a “hot” disease required a “cold” cure, and vice versa. But Paracelsus advanced a radically new medical philosophy. He believed in an interconnected universe. Chains of sympathetic relation connected all things, and the body of a human being was a microcosm of the universe.

Soon, Paracelsus was sharing his bold new theories of medicine with the world. Unlike his predecessors, he opened his lectures to the public, and delivered them in the vernacular, rather than in Latin. At one lecture, he even publicly burned Galen’s textbook.

Rather than focusing on the balance of opposing humors, as the Galenic physicians did, Paracelsus believed that “like cures like.” This is how the weapon-salve fit into Paracelsian philosophy: When you bleed on a blade, his followers argued, your body becomes linked to it. The wound and the weapon “doe sympathise together, even as wee see one thred extended from one end of a chamber unto the other.” Therefore, to treat the weapon is to treat the wound.

The congealed blood of St. Januarius, enclosed in a little glass vial, was seen to re-liquefy and froth.

The debate over the sympathetic cure became a flashpoint in another defining conflict of the era: Protestantism vs. Catholicism. Paracelsus’ followers believed his work would purify medicine and return it to its rightful, natural state, just as Luther had purified religion. Paracelsus was even called the “medical Luther.”

But the connection between Paracelsus and religious non-conformism didn’t fully solidify until about a century after the doctor’s death, when the Puritan Revolution began. Religious reformers were attracted to the radical Paracelsian doctrines, which reflected their ideas of a natural world imbued with God’s presence.

Shockingly enough, Protestants even began to use the logic of Paracelsian sympathetic links to explain the miracles performed by holy relics. In Naples, for instance, the congealed blood of St. Januarius, enclosed in a little glass vial, was seen to re-liquefy and froth every year on the saint’s feast day. For centuries, the Catholic Church had relied on predictable miracles like that one as palpable evidence of God’s favor. Now Protestants began to argue that the frothing of the blood could be simply a natural phenomenon—a manifestation of the sympathetic link between the saint’s blood and his skull, which were ritually reunited on the day of the saint’s festival.

The heretical implication was that the saint’s body was not so different from any ordinary corpse. Conversely, any ordinary corpse might, like a saint’s relics, perform marvels of healing. In his Dispensatory, the Puritan Edward Taylor lists medical uses for human flesh, fat, bones, skin, brains, and marrow, to cure everything from smallpox to “windiness of the body.” The bodies of those who had died violent deaths were supposed to be particularly effective, as they were more full of vital spirit than those who died of illness or age.

Not every Puritan supported the practice, of course. For instance, Cotton Mather wrote of the use of human skull in medicine, “I abominate it. For I take Mans Skull to be not only a meer dry Bone, void of all Vertue, but also a nasty, mortified, putrid, carrionish piece of our own species… And therefore, in my Opinion, it would be decent; and almost pious, to carry them all out of the Shops, and heap up a sepulchral mound for the reception of the bone.” Yet Mather’s casual reference to the “shops” indicates just how easy it was for the average person to come by a bit of human skull while out doing the shopping.

It’s ironic that Puritans—who abhorred the Catholic belief in literal transubstantiation as “cannibalistic”—so whole-heartedly embraced literal cannibalism. (To be fair, the practice has a long, long history in European medicine.) Yet, as the Americanist Karen Gordon-Grube argues in “Evidence of Medical Cannibalism in Puritan New England,” in a certain sense, for the Puritans who practiced it, medical cannibalism fulfilled the same function as communion. The flesh was imbued with the spirit of Christ; they ate of the flesh, and they were healed.