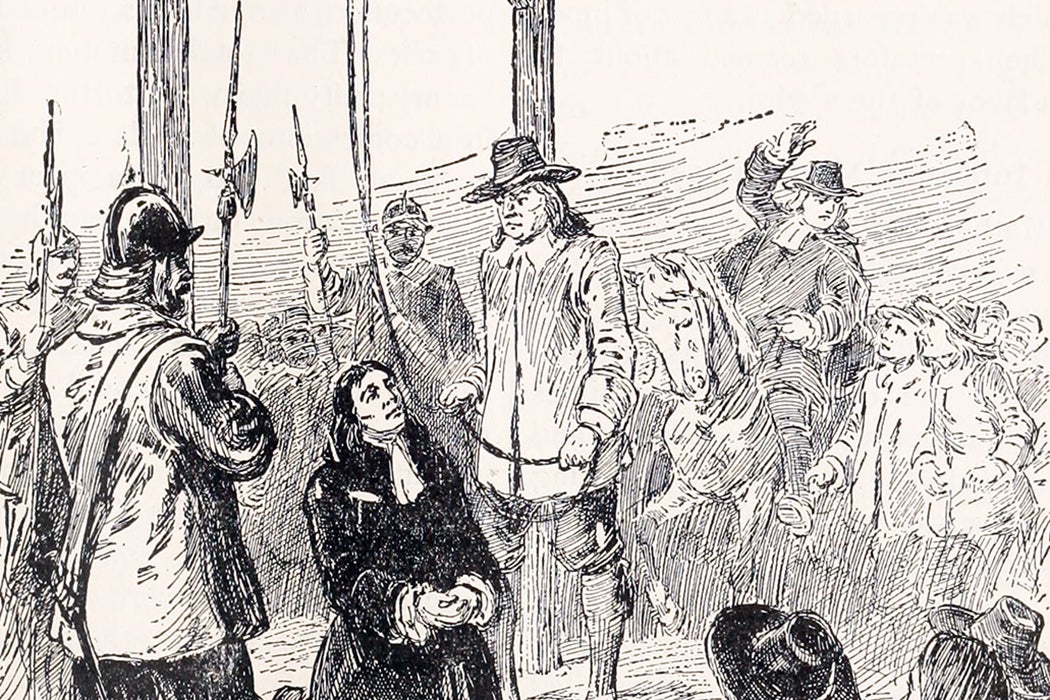 American gallows literature before 1800 provides a wild ride through the Puritan mind. These sermons, final confessions, dying speeches, narratives, and even poems, include such titles as Impenitent Sinners Warned of Their Misery (1698) and The Declaration, Dying Warning and Advice of Rebekah Chamblit… Aged Near Twenty-Seven Years, Executed [for murder] (1733).

The titles say it all. These were warnings to stay on the path of righteousness. The condemned were exemplars of sin: in addition to being executed, they were going to hell. And these hot-off-the-execution takes were well-read, popular works. Puritans ate this stuff up.

These publications also “provide a collective history of early American political and theological attitudes toward criminal and social justice” writes Ronald A. Bosco. Bosco’s fascinating annotated checklist begins with Samuel Danforth’s The Cry of Sodom Enquired Into. Published in Boston in 1674, this book has an eloquent extended title: “upon occasion of the arraignment and condemnation of Benjamin Goad for his prodigious villany. Together with a solemn exhortation to tremble at Gods judgements, and to abandon youthful lusts.” Young Mr. Goad’s “prodigious villany” (sic) was having sex with a horse.

Cotton Mather, who dominates the early part of Bosco’s checklist, was a master of the genre. He wrote about individual cases and put together collections like Pillars of Salt (1699), which details dozens of capital cases. Pillars includes a woman who had to be executed twice since the first time didn’t take, and another case of bestiality in which the offending animals were also executed.

Daniel E. Williams writes that Mather, who wanted to both edify and terrify readers, used dialogue and first person narration to “satisfy the imaginative hunger for sensation and story” of his audience. Williams argues that Mather “dwelt upon subjects that might better be found in True Detective magazines.” This is precisely why Williams sees these works as the foundation of American crime literature.

As Williams details it, executions, and the sermons about the executed, were tremendously popular. Attendance at public executions ran into the thousands. This, in an era of sparse population—Boston had 6,700 residents in 1700. Preachers were big draws, too. When a triple-header of hell-describers—Cotton Mather, his father Increase Mather, and Joshua Moody—all preached about a condemned murderer (who was present), some five thousand people showed up. Most couldn’t get in. Still, the church had to be evacuated because the upper gallery cracked from the weight of the crowd. Publishers rightly saw a market in publishing such sermons.

However scandalous and salacious, even exploitative, these works might be, they were premised on rigorous Puritan morality. Redemption and acceptance of punishment were the orders of the day. The stories above all dramatized the sinner’s submission to authority.

However, the texts don’t actually reveal much about the condemned men and women themselves. They aren’t so much individuals as exemplars of the fire and brimstone to come for sin. It isn’t until the middle of the eighteenth century that more realistic voices of criminals started being heard. The literary figure of the criminal eventually became the now more familiar anti-hero, celebrated more than condemned.