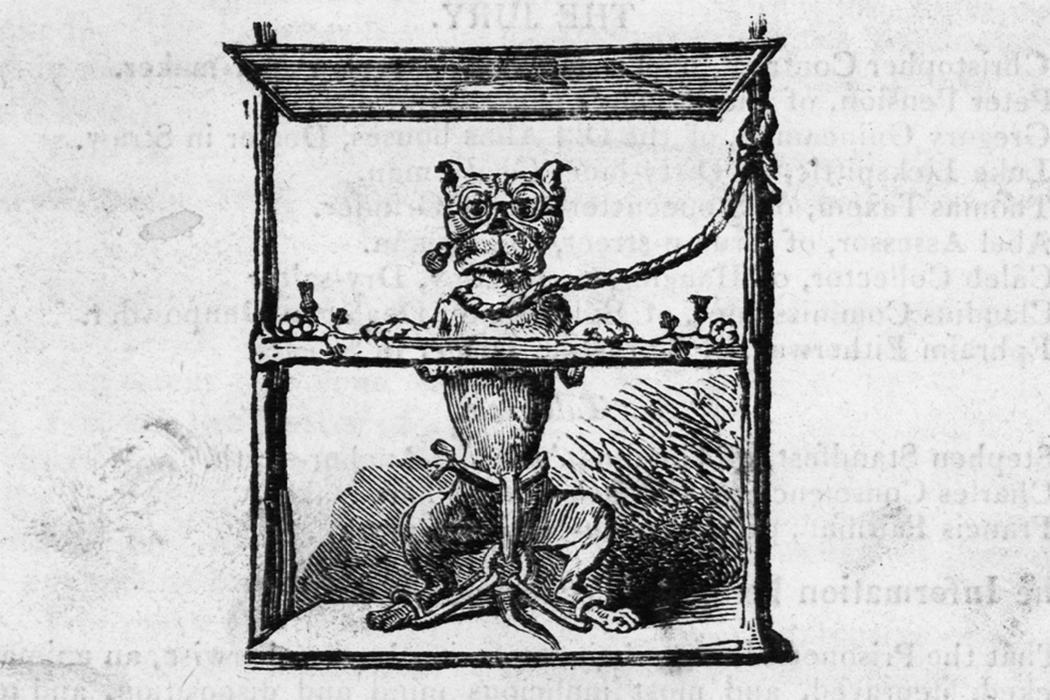 “The trial of the dog for biting the noble lord”
By: Sonya Vatomsky
8 minutes
Share Tweet Email Print

In 1386, in the old Norman city of Falaise, a “vast and motley” crowd gathered to witness the execution of a convicted murderer. Spectators donned their best velvet and feathers, the prisoner was given a new suit for the occasion, and an artist memorialized the scene in fresco. For more than 400 years (until its careless destruction in 1820 by a whitewasher), the west wall of the town church was a testament to that day’s incredible proceedings: the aforementioned criminal was a pig, which “had indulged in the evil propensity of eating infants on the street” and was sentenced to be maimed in the head and forelegs prior to hanging.

Although we often think of strange lawsuits as an American pastime, medieval Europe has the U.S. beat. For centuries, the courts of France, Italy, Switzerland, and other nearby countries tried pigs, dogs, rats, grasshoppers, and snails for crimes against people, property, and God. These animal trials were of two kinds: (1) secular suits against individual creatures who had maimed or killed humans; and (2) ecclesiastic cases against vermin like mice and locusts, who were excommunicated for their grain-related crimes. Ever since then, scholars have been trying to figure out why these bizarre proceedings happened at all: As William Ewald once wrote, “Nobody knows what they were for, and nobody has ever known.”

The most exhaustive tome on the topic, authored by E. P. Evans, is the Chronological List of the Prosecution of Animals from the Ninth to the Twentieth Century, which details 196 cases from 14 countries. According to the lawyer and legal historian Hampton L. Carson, whose The Trial of Animals and Insects described the final moments of the sow of Falaise, “This wide distribution of time and territory shows how persistent and prevalent the practice was, and corrects any notion of its being due to local passion or territorial superstition. The most numerous cases were in France, but this is due to a more careful study of ancient records by French antiquarians than by those of other nations.”

In December of 1457, France was again the scene of a bloody murder—this time in Savigny, where a sow had turned to violence with six piglets in tow. After all seven pigs were caught in the act, they were imprisoned and eventually brought to trial. Esther Cohen, the author of Law, Folklore, and Animal Lore, notes that from the very beginning of the legal proceedings, it was clear the owner of the pig—though formally the defendant—was accused only of negligence and faced no actual punishment for the killing of five-year-old Jehan Martin; the sow, on the other hand, faced the death sentence. After hearing testimony and consulting with men wise in local law, the judge sentenced the porcine criminal to hanging by her hind legs, in accordance with the custom in Burgundy. The six piglets escaped death since no one could prove they participated in the crime, though they were found covered in blood.

The judge, lawyers, councilors, and hangmen took the cases as seriously as they would any other murder.

When all was decided, the court called a professional hangman to carry out the sentence. In all instances of recorded animal trials, the judge, lawyers, councilors, and hangmen took the cases as seriously as they would any other murder. In Animal Trials: A Multidisciplinary Approach, the historian Peter Dinzelbacher argues that the use of traditional court employees rather than ones appointed specifically for animal trials is the “foremost proof” of how serious these proceedings were. Judges, bailiffs, and the rest “did not officiate for nothing,” and jailers “charged the same daily rates for a pig’s board as for that of a human prisoner.” (The hangman in the case of Falaise, it turns out, is still owed for both the execution and a purchase of new gloves.)

The pig trials of Falaise and Savigny were typical secular animal trials, both in location and time period. Additionally, pigs “[seemed] to have accounted for the deaths of many unattended infants” and were common culprits, though records also show bloodthirsty cows, horses, and dogs. Most of all, Cohen concludes, “the [Savigny] trial is typical in its painstaking insistence upon the observance of legal custom and proper judicial procedure.”

Comparisons have also been made with cases brought against witches as well as with cases brought against inanimate objects or effigies. Though trials against individual animals usually did not involve the premise of possession or other demonic activity, an 1474 execution of a cock was somewhat of an exception. The bird, a citizen of Basle, was facing death for laying an egg; sources disagree as to whether the egg would become a basilisk or a cockatrice, but both options were unwelcome, and the cock was put to death. “Though the belief in the basilisk was age-old,” Cohen writes, “it occurred to no one actually to execute a living cock before the fifteenth century.”

Dinzelbacher believes a proper understanding of animal trials necessitates an understanding of several unique factors present in the late Middle Ages. The time period was one of crisis, “when extreme measures to ensure law and order were held to be necessary.” He notes that such trials took place “only under extremely unusual circumstances in order to help the local community cope with an otherwise recalcitrant threat—not because they were proven to work but because they created the impression that the authorities were assiduously maintaining law and order in a cooperative and decided manner, even if the delinquents were not human beings.” They were by no means an invention of the Dark Ages, instead taking place primarily between the thirteenth century and the Enlightenment, though there are modern cases, like that of a Macedonian bear convicted in 2008 of stealing honey from a beekeeper.

Despite being unlikely candidates for Catholicism, vermin were punished with excommunication.

While domestic animals like pigs, foxes, wolves, goats, asses, bulls, cows, dogs, horses, and sheep fell under the jurisdiction of civil and criminal courts and would have been summarily executed by hanging or burning after a guilty verdict, ecclesiastical tribunals handled all vermin, from field mice, rats, and moles to bugs, beetles, eels, leeches, locusts, serpents, snails, termites, weevils, and worms. Despite being unlikely candidates for Catholicism, such creatures were punished with excommunication, not execution. This distinction is held because “rodents and insects were not the subject of human control, and could not be seized and imprisoned by the civil authorities.” Hence, it became necessary to appeal to the intervention of the Church.

For vermin trials, the procedure was often as follows: A town or district that found itself plagued by animals would launch an investigation. An advocate would be named to defend the pests should grounds for bringing them to trial be found sufficient. A summons would then be served by a court official who would read it—in a loud and solemn voice—“at such places as the animals frequented.” The animals would have three opportunities to appear in court and plead their case; if they lost, which they usually did, they would be asked to leave the district within a certain period of time. Inability to show up for sentencing and adhere to its resolution resulted in an unlikely punishment: excommunication.

Why the Church involved itself thusly is up for debate, but the economist Peter T. Leeson has an interesting theory. In “Vermin Trials,” an article appearing in a journal of law and economics, Leeson posits that the Catholic Church used ecclesiastic animal trials to increase tithe revenue in areas of high tithe evasion. The trials, Leeson argues, “achieved this by bolstering citizens’ belief in the validity of Church punishments for tithe evasion: estrangement from God through sin, excommunication, and anathema.”

In the sixteenth century, the citizens of Autun, France accused local rats of feloniously eating and wantonly destroying their barley crop. In the 15th, a species of beetle called an “inger” found itself under fire for devastating the fields of Berne, Switzerland. That same century, a lawsuit was brought against flies in Mainz, Germany. “Ecclesiastic judges showed impressive fairness toward vermin in such trials,” Leeson writes; when the flies refused to appear in court after being justly summoned, the court took pity on their small size and young age and appointed them more adequate defense counsel to prevent further no-shows. Communities often sued pests collectively, as well: “in 1659,” Leeson writes, “the Italian communes of Chiavenna, Mese, Gordona, Prada, and Samolico banded together to prosecute caterpillars they charged with trespassing on and damaging their fields.”

Leeson’s economic analysis would explain why judges “used excommunication and anathema to punish creatures that were never communicated in the first place.” It also brings sense to the vermin trials’ geographic distribution (France, Italy, Switzerland) as well as their occurring primarily in the 15th through 17th centuries. Vermin trials, Leeson argues, were based on a superstition that took hold because the time period’s knowledge of pests and how to control them was poor. Pesticides available during those centuries included “sprinkling weasel ashes or water in which a cat had been bathed over fields to drive away mice; capturing a rodent, castrating it, and releasing it among other rodents to deter them; putting castor oil plants in afflicted fields to drive away moles; and hanging garlic around flock leaders’ necks to protect sheep from wolves.” An ecclesiastical trial, compared against such remedies, does not sound altogether unsound. Call it divine pesticide.

Leeson’s theory also ties in with witchcraft and heresy, and his article includes a chart that shows vermin trials mapped against witch trials. 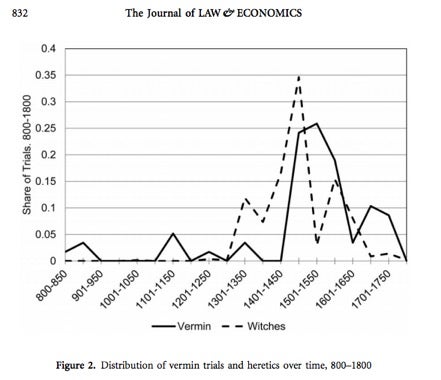 Like vermin, the mystery of animal trials has long plagued us—or, at least, it has long plagued medievalists and historians of law. The trials have been called exaggerations or the results of bad record-keeping, parodied in the seventeenth century by the great French dramatist Racine, whose Les Plaideurs follows a dog tried for stealing a capon. Accelerating right when man was supposed to have discovered logic and then mysteriously dying down, the trials don’t line up with how we view our own history.

They also continue to this day, mostly in remote areas where Catholicism maintains an influence. Cohen believes that though they “settled no disputes and kept no peace,” the trials were important in other ways. They defined our relationship with animals and reaffirmed our judicial rights over the world, logical and illogical. Through the lens of history, they teach us that one century’s quest for rational order is another’s bizarre fact. 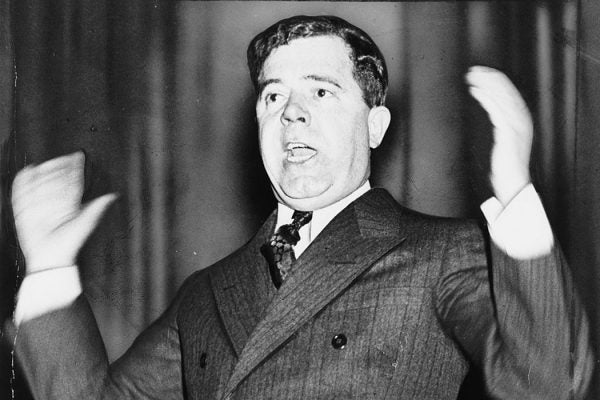 Huey Long: A Fiery Populist Who Wanted to Share the Wealth

Senator and Governor Huey Long of Louisiana was assassinated on September 10, 1935, but he packed many accomplishments into his short political career.