The Man Behind the USA’s Decision to Build the Bomb

FDR’s “czar of research,” an electrical engineer named Vannevar Bush, was working on an atomic bomb months before Pearl Harbor. 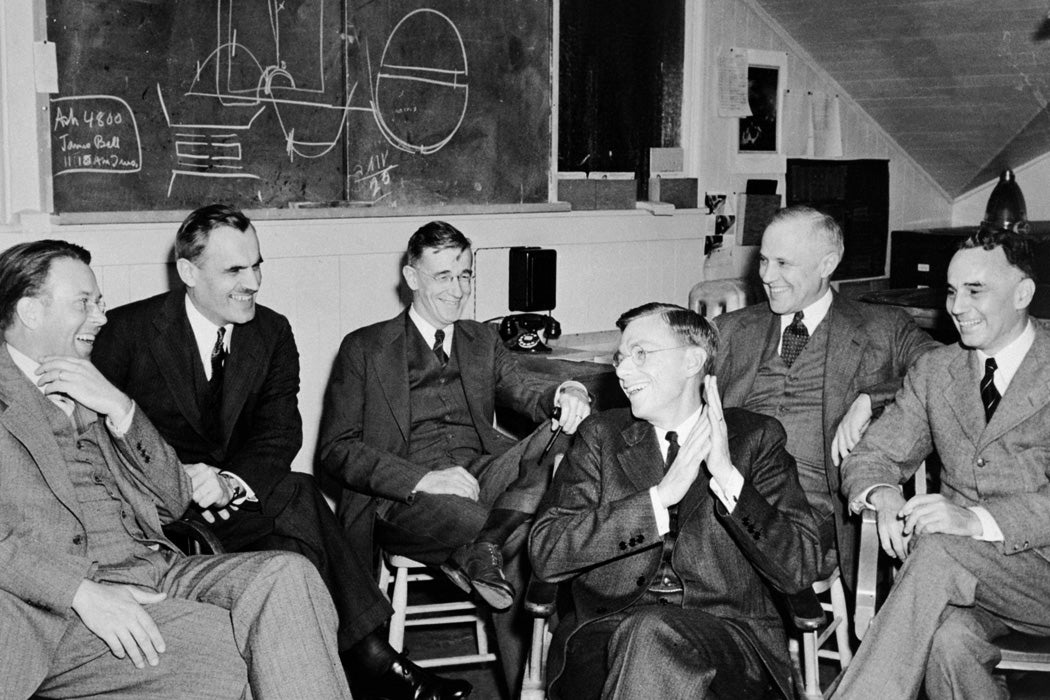 Why did the United States build an atomic bomb? The decision was actually made before Pearl Harbor and U.S. entry into World War II. Upending traditional bureaucratic histories, which argue the decision was a “consensual one based on assessments of the technical feasibility of the project,” historian Stanley Goldberg instead points to one man: Vannevar Bush. Bush was a renowned electrical engineer and the head of the Carnegie Institution. He was essentially the first Presidential science advisor, a “czar of research” (as he was called in the New York Times), and a brilliant tactician in the bureaucratic maze of Washington.

The spark of the decision to move towards developing nuclear weapons was a 1939 letter to President Franklin Delano Roosevelt from physicists Leo Szilard and Eugene Wigner. With an eye on the 1938 German discovery of nuclear fission, they warned of the danger of Germany pursuing atomic weapons. Szilard and Wigner got the most famous physicist in the world, Albert Einstein, to sign the letter. The letter resulted in a federal Uranium Committee, whose writ was to explore the “possibilities of practical applications of uranium fission,” writes Goldberg. But it proceeded “at a snail’s pace” into the summer of 1940.

Bush could claim, legitimately, that the President was behind the effort. In the bureaucratic world, that was everything.

Bush, who had “deep-seated convictions concerning the organization of the scientific and technological communities in times of national emergency,” knew this wouldn’t do. He organized a National Defense Research Committee (NRDC) in June of 1940, with authority over the Uranium Committee. Goldberg argues that Bush’s closeness to Roosevelt was key here. Bush could claim, legitimately, that the President was behind the effort. In the bureaucratic world, that was everything.

The next landmark in the decision to green-light the bomb was another letter. In April 1941, Rudolph Landenburg, a German-born physicist at Princeton, wrote to the Uranium Committee. Landenburg revealed that a recent German émigré had given him a message from “a reliable colleague” in Berlin that “a large number of German physicists are working intensively on the problem of the Uranium bomb under the direction of [Werner] Heisenberg.”

The British, meanwhile, were enthusiastically arguing that “a bomb of unprecedented power could be developed in three year’s time”—albeit not by them, as they were in the midst of a life and death struggle with Germany. Taking both British opinion and the news from Germany, Bush strove to create what Goldberg calls a “climate of opinion” in government about the necessity for a crash program.

What Bush accomplished in the summer and fall of 1941 was to organize and discipline the forces that favored proceeding, suppress and render impotent those who urged caution, manipulate the appearance of consensus […] and above all else, get the president’s commitment to a major production effort in nuclear technology.

On October 9, 1941, two months before the attack on Pearl Harbor, Bush got the commitment he sought. FDR made the decision to move towards an atomic weapon. The project was supposed to cost $133 million; it ended up being more than $2 billion by August 1945, when the only nuclear weapons ever used in war were exploded over Japan.

The costs were buried in the massive Army Corps of Engineering budget. Goldberg notes that Bush, “a man who was most outspoken on the importance of democratic forms to the vitality and robustness of scientific research organizations, was able to fund the entire American effort in building the atomic bomb without congressional advice and consent.”

After the war, it was discovered that the Nazis were nowhere near the development of a nuclear weapon. The Germans, it seems, did not see any possibility of “obtaining consequential results that would affect [the war’s] outcome.”

Inventing a Climate of Opinion: Vannevar Bush and the Decision to Build the Bomb
By: Stanley Goldberg
Isis, Vol. 83, No. 3 (Sep., 1992), pp. 429-452
The University of Chicago Press on behalf of The History of Science Society