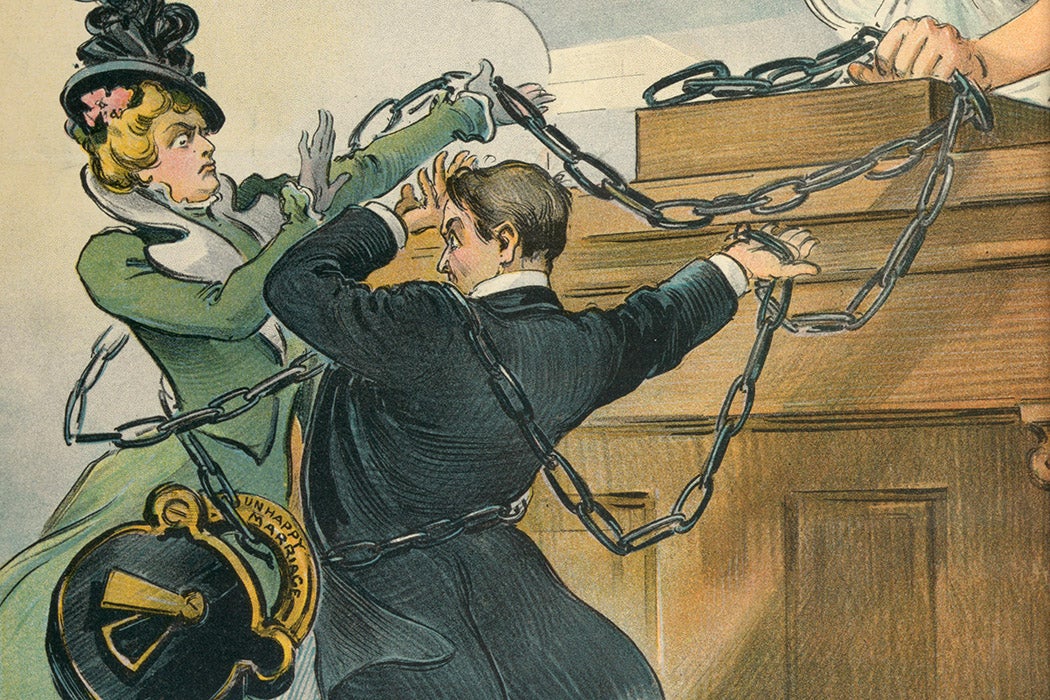 A detail of an illustration from Puck, 1900
via Wikimedia Commons
By: Ashawnta Jackson
4 minutes
Share Tweet Email Print

Attitudes toward—and regulation of—divorce have changed a lot over the generations. In the 1920s, for example, “trial marriages,” arrangements that historian William Kuby describes as “a union that couples entered into with an eye toward impermanence,” were meant to reduce divorce rates. Basically, any marriage that lived outside the lines of tradition, including couples without children or “bohemian couples,” could be considered a trial marriage.

In most cases, it was the woman who was branded most harshly if a trial marriage came to an end. One woman, hoping to split from her spouse and leave a trial marriage, was told by the judge that it’s “better that a few suffer and to lie in the bed which they voluntarily made” than to encourage what he saw as the weakening of the institution.

Divorces were “fault-based,” meaning that there needed to be abuse, infidelity, or some other reason to justify a split.

During that time, divorces were also “fault-based,” meaning that there needed to be abuse, infidelity, or some other reason to justify a split. But a law can’t fix a broken marriage, and as legal scholar Laura Oren writes, in the 1930s to the 1950s, couples “often were able to evade the strictures of rigid fault-based statutes,” either by working together to assign fault or sometimes going to “more liberal jurisdictions to get divorced,” a practice known as migratory divorces.

This all ended with the introduction of the “no-fault” divorce. And as Oren explains, one organization—the National Association of Women Lawyers (NAWL)—was instrumental in creating this change. Its work on no-fault divorce, which began in 1947, is little known, but Oren argues that it constitutes “a lost chapter well worth recovering.”

The NAWL started in 1899 as a club for women lawyers in New York. Like many other women-only groups of the era, it was established because women weren’t allowed in established legal organizations. Clubs such as the NAWL were formed “as a way to combat sex discrimination and also to express their professional identification,” Oren writes.

NAWL was a broadly feminist organization, and “approved social feminist efforts to pass and defend gender-specific protective labor laws for women,” Oren writes. This included things such as creating widows’ pensions and, later, supporting the Equal Rights Amendment. It was similar to many other progressive organizations at the time, but like many other well-intentioned movements, it had its own shortcomings. For instance, the NAWL founded the Women Lawyers Journal, a groundbreaking publication that focused on issues of interest to women, increased membership, and extended the reach of the organization. But the Journal also featured articles that reflected the “implicit and sometimes explicit racism of white Progressive reform movements,” Oren notes.

However, if you were a woman who fit into the category of “marriage-appropriate,” the women of NAWL would make sure you could end that marriage. The Journal featured several articles on migratory divorces, for example. But there was concern from conservatives about these types of divorces, leading to demands for legislation.

That pressure led to President Theodore Roosevelt convening the National Congress on Uniform Divorce Laws to draft measures to control divorce in 1906. This outraged women’s groups, including NAWL, who “feared the likelihood that men would once again be determining matters of great importance for women’s lives,” Oren explains. Though some limits were placed on migratory divorces, this convention also exposed the mishmash of divorce laws across the nation.

The NAWL drafted their first model bill for no-fault divorces in 1947, trying to ensure new laws would reflect modern ideas. Those ideas, explained N. Ruth Wood, then an NAWL committee chair, no longer required a “wronged person” for the divorce to be granted. “[C]ommon thought today,” wrote Wood, “is that divorce is a remedy for domestic incompatibility and should be granted when the parties consent.”

It was a long road to no-fault divorce becoming the norm (and it’s up for debate again), with the first state, California, adopting it in 1969, and the last, New York, in 2010. Ultimately, the models drafted by NAWL weren’t the basis for the change. As Oren writes, “new initiatives that were not connected to NAWL’s project overtook events.” But their early work was vital, leading one of its archivists to describe it as “the greatest project NAWL has ever undertaken.” 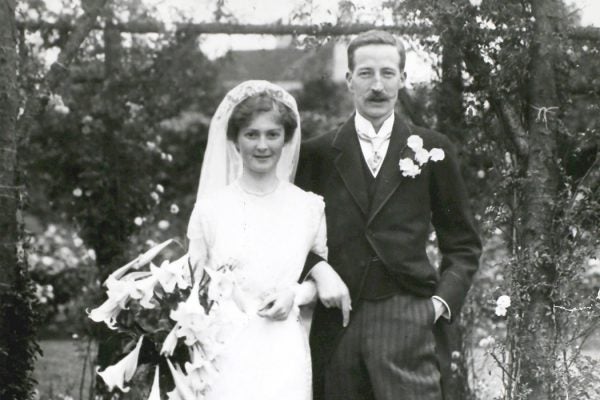 In early 20th-century New York, men accused of "ruining" women under eighteen could avoid prosecution by marrying them.