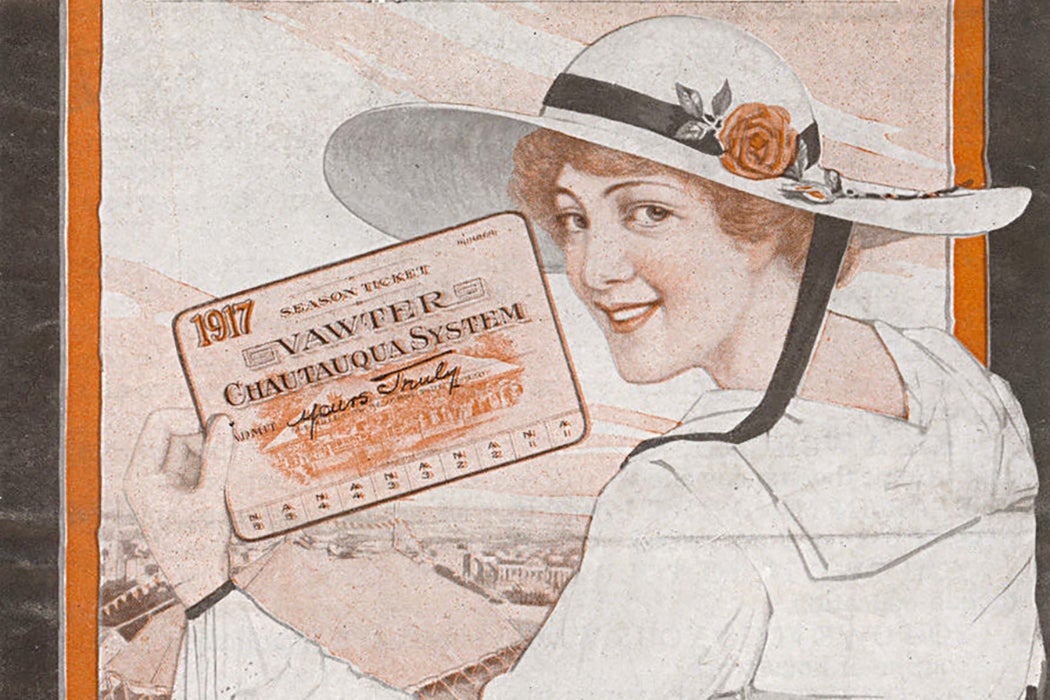 Do you know what a chautauqua is? If you don’t live in a city like Boulder, Colorado, which has a large auditorium and park named after the movement, you might be drawing a blank. But at the turn of the twentieth century, many Americans would have been familiar with the movement—especially those who lived in the Midwest. As Julie R. Nelson writes, chautaquas didn’t just educate Americans. They changed the lives of Midwestern women between 1878 and 1900, setting the stage for new gender roles in the twentieth century.

Chautauquas were the brainchild of John Heyl Vincent, a Methodist minister, and Lewis Miller, a businessman. Together, they reimagined an outdoor Sunday school training program on Chautauqua Lake in southwestern New York as the Chautauqua Institution—a kind of assembly designed to introduce attendees to new ideas and education. The concept spread throughout the United States as chautauquas in rural locations provided attendees with an ever-changing array of lectures, concerts, and other cultural opportunities.

The majority of Chautauqua participants were women at a time when strict social roles affected their educational opportunities.

The Chautauqua Literary and Scientific Circle, as the movement was called, also provided a four-year correspondence course for attendees. Nelson writes that it was one of the few ways rural people could get a liberal arts education. The curriculum started out as a reading list, then morphed into a formal course that offered a degree. Rooted in both spirituality and art, the courses caught on across the Midwest.

Chautauquas “satisfied an unspoken need” for rural women, writes Nelson. The majority of participants were women at a time when strict social roles affected women’s educational opportunities. “There existed a fear in the hearts of many families that education…might jeopardize a daughter’s success in marriage and motherhood,” Nelson writes. Women were discouraged from pursuing a liberal arts education, and the few opportunities available for education in the 19th century emphasized their “proper” sphere: the home.

But a CLSC education took place in the home—and since it fell within women’s sphere, it allowed women to do things like keep house and mother their children while learning. The progressive, student-paced program was ideal for nursing mothers and housewives, and offered women a social outlet during conversations with other participants. This “subtly expanded women’s sphere and renegotiated gender interactions” as women adopted active roles within the organization and mixed freely with men.

It was a “subtle revolution,” writes Nelson—one that women carried into other areas of their lives. For Nelson, the most lasting legacy of the chautauquas was the way in which it enabled a “bigendered culture,” and that culture opened up political and social opportunities that had previously been off-limits to Midwestern women.

Chatauquas, which Theodore Roosevelt called “the most American thing in America,” had other legacies, too. Everything from TED talks to Massive Open Online Courses (MOOCs) were influenced by chautauquas, and multiple Chautauqua communities and facilities still exist today. The term may be nearly obsolete, but the movement’s commitment isn’t.