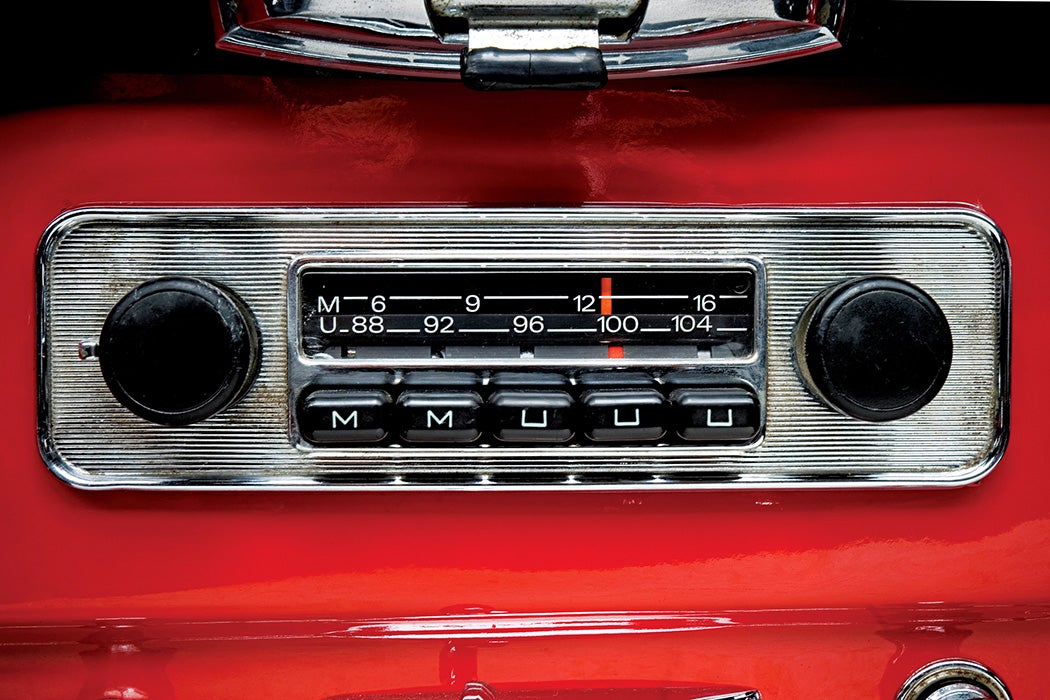 With millions of songs at our disposal for streaming through the speakers on a morning commute, car audio has never been more convenient. It has come a long way, absorbing and broadcasting evolving meanings of the automobile and its function(s). As technology analyst  David Z. Morris explains, the car had appeared “in a world where struggles over sound had been articulated with particular meanings in terms of class and power … the combination of cars and sound created a new field of struggle within this matrix of meaning.”

The luxury of an “at-home” sound system in a car was a dream years in the making. Car radios were a luxury at first. They relied on bulky, easily broken, and expensive vacuum tubes, which “generally limited car audio to a small segment of the privileged,” Morris writes. And even if they were easily accessible, not everyone was thrilled with the idea.

English commentator W. R. Anderson, writing in 1935, was certainly unimpressed. On a visit to the US, he bemoaned the prevalence of car radios, “This in a country where car speeds are higher than here [the United Kingdom], cars more powerful, and the need for constant attention literally vital. Car radio sets number about two millions in U.S.A. out of a total of some twenty-one millions.” And though there were, overall, more household radios in England, Anderson breathed a sigh of relief that the “car radio has not taken our fancy, praises be.”

And those who had more technological concerns saw problems, too. “High fidelity receivers have no place in the automotive field at present,” radio engineer Virgil M. Graham wrote in 1934. The sound was bad, the receivers too large; any attempt to make them smaller would only cause problems. It doesn’t mean they didn’t try, Morris points out. In the 1930s, designers experimented with “cold tubes” as a way to make car radios more practical, and in 1947, Bell Labs created the transistor, a lighter, more durable alternative to the vacuum tube. Most importantly, “the transistor could be manufactured by highly automated processes and at extremely low cost.” The car radio, an accessory only 40 percent of cars had in 1946, was in 90 percent of cars by the 1970s.

But why stop at radio?

In 1956, Chrysler was the first to offer the comforts of home in a car with the introduction of an in-car record player. The “Highway Hi-Fi” was “mounted just below the center of the dash and played through the car radio speakers,” an anonymous author explained in the Journal Of Passenger Cars. There were also 8-track players, cassettes, and Oldsmobile’s ​​“Sportable” / “Transportable,” a transistor car radio that “could be removed from the dash when a lever inside the glove box was released. Once removed the compact radio functioned as a battery-powered portable radio with up to 50 hours of playing time.”

However, car audio wasn’t just a way to listen to the day’s top hits. In post-war America, radio was also “framed as a private accessory for the business commuter,” Morris explains. These business commuters were mostly male, and this framing extended to at-home hi-fi culture, “in which sound quality indexed class.” But as car audio became more accessible, and its users more diverse, the idea of what quality sound was changed. From the roaring engines of hot-rod culture, to teens using loud radios to claim space in the 1950s, to today’s sound systems with their rumbling bass and Decibel Drag Racing (competitions where sound levels go from 177 to 182 db), “car audio was put to the work of asserting identity in a concerted, countercultural manner,” Morris explains.

Noise? Maybe. But as Morris points out, there were “fierce battles in postrevolutionary France over village bells.” Sound has always been a contentious issue. Accessible car audio has created new groups who “found new uses for the technology in claiming space and challenging middle-class ‘normality.’”

In the 1920s, radio was an exciting new mass medium. It was known for providing entertainment, but educators wondered if it could also be used for education.