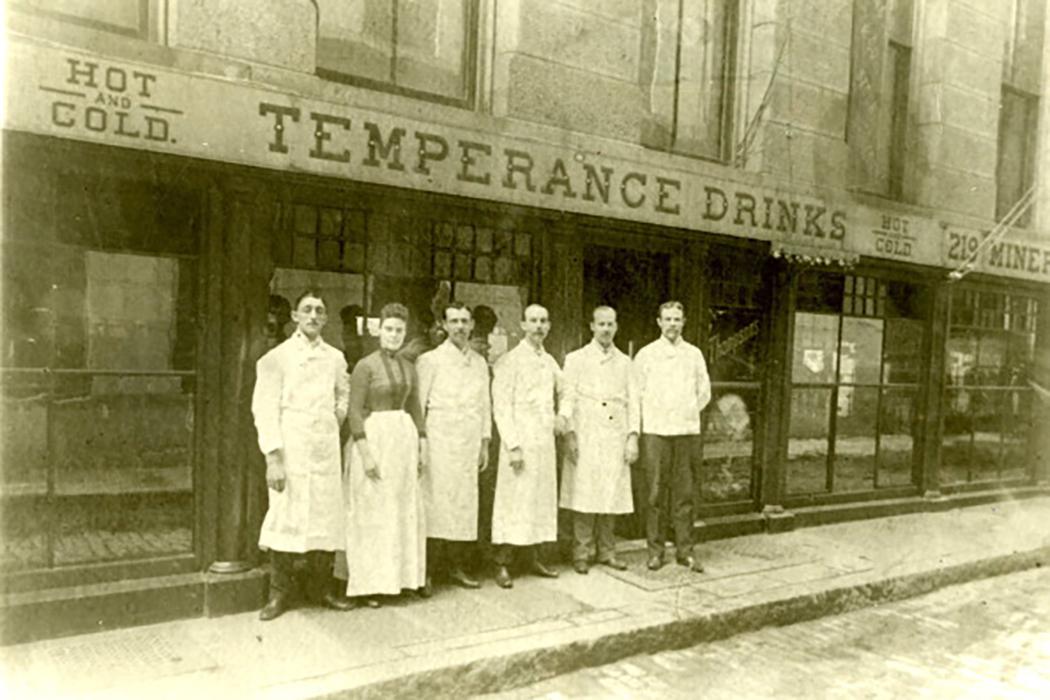 On February 1, 1882, Charles Sumner Eaton opened the doors of his new saloon on Washington Street, near Court, on Boston’s famed Newspaper Row. The address had a long history as the site of the city’s first tavern, licensed to Samuel Cole in 1633. But Eaton, an MIT-educated druggist-turned-barkeep in his mid-20s, had something more modern in mind: The men dressed in white coats and caps who stood behind the marble bars of his establishment would serve no alcohol. Here, the sign outside proclaimed in letters more than a foot high, you would find only “temperance drinks.”

Eaton called it the “Temperance Spa,” though it was widely known in the 1880s as the “Temperance Bar,” for it looked like any other in the city, with a bar rail, “tables and chairs for ladies and gentlemen,” and billiards. There was hot coffee on offer on that wintery opening day, but  “Thompson’s Temperance Spa”—as Eaton would rechristen it a few years later, borrowing his wife’s maiden name—quickly became known for its selection of mineral waters imported from France and Germany. Equally famous was its lengthy list of alcohol-free cocktails, with names such as “Next Morning” and “Moxie Nerve Food” that would not be out of place on a drink menu today. Among the most popular: the egg phosphate, a lemonade-like drink shaken with an egg and tangy acid phosphate.

Like the prominent temperance men, including Bishop of Massachusetts Benjamin Henry Paddock and Governor John Davis Long, who gathered that first day in 1882 to toast to the future success of the new venture, Eaton was on a mission with each egg phosphate he served. He believed that “temperance would be more surely advanced by encouraging places for the sale of non-alcoholic drinks, and, if possible, make the opportunity for sociability prominent.” He also thought there was money to be made.

The temperance saloon was not an entirely new idea in 1882. As far back as the 1830s, temperance societies had understood that their fight would be a difficult one—and not only because of the addictive qualities of alcohol. Alcohol was also part of the social fabric, and men gathered at their local saloons for camaraderie as much as for intoxicants. In 1831, a New York State Society for the Promotion of Temperance census counted 44 “temperance taverns” in that state. But these were primarily inns that attracted weary travelers—some dismayed to find an empty liquor cabinet at the end of a long ride—not the alcohol-free replica of the public house that Eaton created.

Within five years, the saloon was selling some 1,200 egg phosphates on the most humid summer days.

Eaton may have been inspired by the temperance bars that had risen to popularity in England a few years before he opened Thompson’s. Concentrated in the working class towns of northern England, these bars were often established by druggists who saw the opportunity to expand beyond patent medicines. Opening early in the morning to peddle soft drinks to the first shift of mill workers, the druggist sold bitters, sarasparilla, ginger beer, and fruit drinks throughout the day and into the evening in a convivial atmosphere similar to that of the modern coffee shop. One of these English temperance bars, Fitzpatrick’s, which opened in Rawtenstall in 1890, is still open today.

When the English idea was translated to the United States, however, it was not as well received. Established largely by charitable and religious organizations, American temperance saloons were dreary affairs, often in inexpensive, out-of-the-way locations. In later years, the temperance saloon would become known as a haven for the down-and-out or, during prohibition, as a cover for illicit alcohol sales.

But Eaton approached the project as a business endeavor. He was selling soft drinks and a saloon atmosphere, and he knew he needed to offer the best of both in a convenient location. He had a temperance man’s aversion to selling even light wines and cheers—which “undoubtedly create an appetite for stronger liquors,” he said—and he was in the financial position to maintain his conviction for the six long months before Thompson’s began to show a profit. Within a year, Eaton’s small temperance saloon had expanded to fill the whole building, and within five years, the saloon was selling some 1,200 egg phosphates on the most humid summer days.

By the time of Eaton’s death in 1917, just two months before the 18th Amendment prohibiting the sale of alcohol was proposed in the U.S. Senate, Thompson’s, now even larger and with a full menu of food, had become a fixture of Boston life. The Washington Street location operated until 1958. Upon its demise, it was feted as one of the country’s first soda fountains, a prototype of the early twentieth-century soda shop. And, thanks to Eaton inventions, such as an electric ordering board and a “speaking tube” for communicating with the kitchen, it was considered a forerunner of the mechanically efficient fast-food restaurant. It also appears to have inspired the lingering only-in-Boston linguistic quirk of calling lunch counters “spas.” (Eaton was likely originally advertising his mineral waters, bottled in Europe’s renowned spa towns.)

But Thompson’s was, first and foremost, the model of a successful temperance saloon. “It is not a Sunday-school,” Eaton once explained. But Massachusetts Bishop Phillips Brooks admitted Thompson’s “did more for the cause of temperance than all his lectures ever could do.”