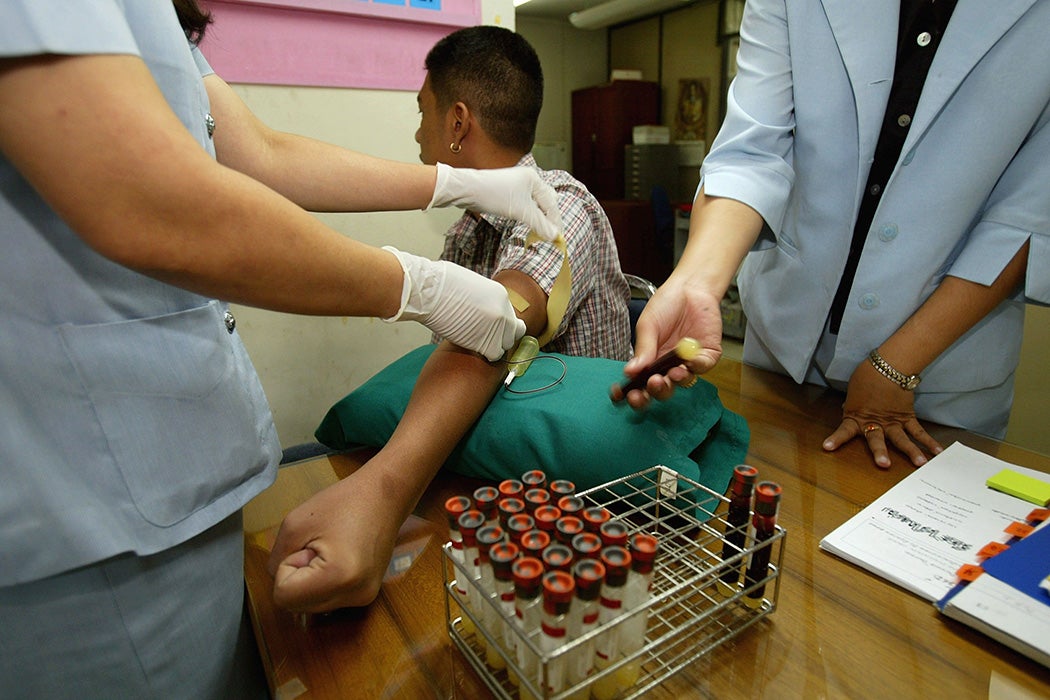 In a little under a year, scientists developed several vaccines against COVID-19. But as we line up for our shots, we are still living in the shadow of another pandemic. The search for a vaccine against HIV, the virus that causes AIDS, has been ongoing for nearly four decades. To this day, only one large-scale trial has demonstrated even marginal efficacy at preventing infection from the virus: the RV144 trial in Thailand—the largest HIV vaccine trial in history.

After HIV was discovered in 1983, some scientists “hoped that a vaccine for AIDS could be forthcoming within two years,” writes infectious-disease specialist Powel Kazanjian. Unfortunately, the traditional method for developing a vaccine doesn’t work with HIV. The virus mutates far too quickly.

Some argued that this collaboration did not stretch far enough.

Taking place over three years, from 2003 to 2006, RV144 was only the fourth HIV vaccine efficacy trial that was ever completed. It was also one of the first coordinated approaches to testing a vaccine treatment, writes Kazanjian. The phase III clinical trial, which recruited 16,000 volunteers in Thailand, was designed to test widespread efficacy of a two-vaccine combination (one “prime” and one “boost”). It was largely financed by the U.S. government and endorsed by eleven international review bodies.

Some argued that this collaboration did not stretch far enough: The National Institutes of Health didn’t consult enough independent scientists or establish a transparent process for deciding which treatments to move forward. Moreover, neither of the two vaccines had been independently successful (hence introducing the novel “booster shot” concept).

Several groups of scientists voiced their concerns in letters to the journal Science: “We believe that greater selectivity is needed to ensure that the products that reach phase III efficacy testing are promising ones that have reasonable chance for success,” wrote Dennis R. Burton et al. In another letter, Robert Gallo, the co-discoverer of HIV, expressed concern that “the high cost of phase III trials could easily deprive the field of the resources required to move forward the more promising of these candidates.”

Other scientists disagreed: in the same issue of Science, Robert Belshe et al. wrote, “If this trial…adds to knowledge about HIV vaccine development and prevents even a fraction of future HIV/AIDS cases, its contribution will be very important.”

In 2009, three years after the trial’s completion, the results were published. They revealed a marginal reduction in HIV infection, with a reported efficacy rate of approximately 32 percent. This isn’t a mind-blowing statistic—the treatment would have needed at least 50 percent efficacy for the Thai government to support approval—but it was the first evidence of effectiveness for any type of HIV vaccine. In all, 160 volunteers died over the course of the study, none from symptoms that were directly linked to the treatment.

Ten years later, Mitchell Warren, executive director of AIDS Vaccine Advocacy Coalition, recalled the results of the RV144 trial as “the compass that reoriented [the] collective search” for an HIV vaccine, starting “incredible cascades of proof of concept.” He refers to RV144 as “the catalyst, a rejuvenation in the field.” Recently, a new HIV treatment showed promise in the very early “proof of concept” phase of testing and could potentially be combined with RNA technology to further innovation. The fight against HIV is far from over, but scientists aren’t giving up.