Grassland birds, such as the prairie chicken, plover, and bobolink, need a complex environment of varying structure, area, and grass types. 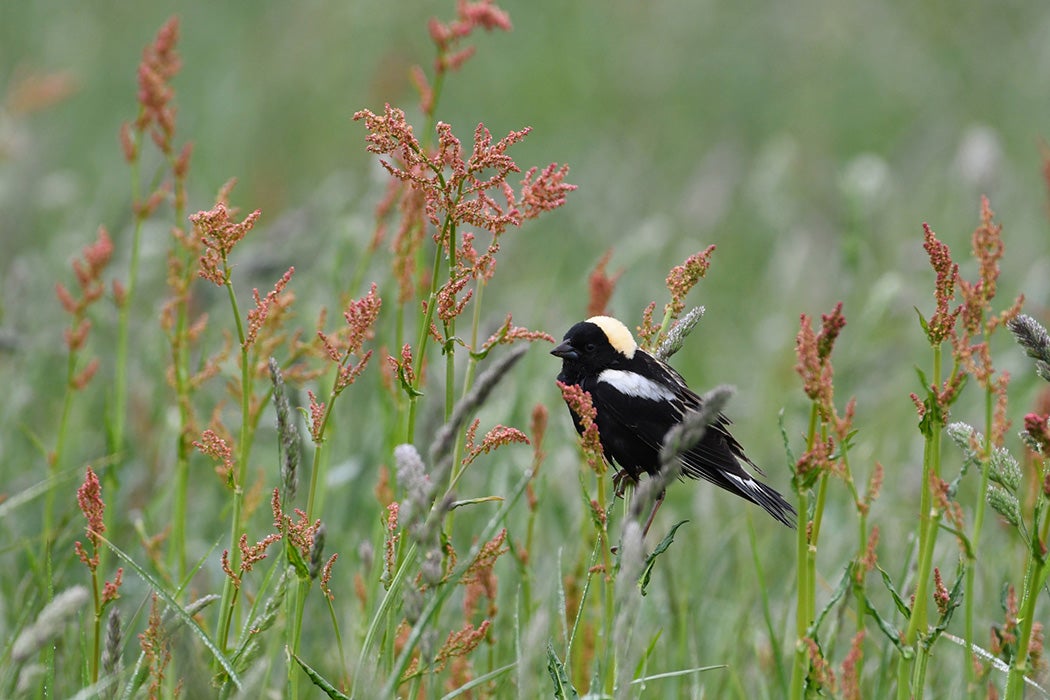 Since the 1900s, native grasslands have been some of the most threatened ecosystems in the United States, losing up to 99 percent of their area due to intensive agriculture, haying, and grazing. As the demand for croplands increases, native grasslands will continue to be in jeopardy.

Grasslands have many ecosystem values: soil conservation, flood mitigation, and habitat for a plethora of species, particularly birds. Birds rely on the grasslands for habitat and food sources, and in turn, they disperse seeds and control insect populations. As grasslands shrink, so does habitat for many bird species. But federal agencies are working to restore these ecosystems by encouraging farmers to conserve grasslands through financial incentives, leading to increases in bird populations and carbon storage.

But on the whole, researcher J. Curtis Burkhalter writes, grassland birds face the problem of declining populations as “no other avian guild” does. “This is troubling due to the variety of ecological services provided by birds, as well as [their] cultural, recreational, and aesthetic values.”

A native grassland is characterized by the plant composition and how the land is used. Grasses are, of course, the dominant plant species, but other vegetation can be present, like legumes, flowering plants, and shrubs. Native American peoples inhabited grassland environments, using them for foraging and hunting. Today, grasslands are primarily used for grazing and haying and are often converted for farming.

A grassland can serve many functions if restored and managed to create natural conditions. Financial incentives, referred to as agri-environmental schemes (AES), allow farmers to continue to profit from their acreage while being able to ensure that birds can thrive.

Grassland birds, such as the prairie chicken, plover, and bobolink, need a complex environment of varying structure, area, and grass types. Previous studies have shown that birds prefer large habitats with high grass-species diversity. When identifying areas of high need, wildlife experts prioritize areas and use methods that could achieve this outcome.

The type of grass that is planted matters—studies have shown that the more biodiverse a grassland is, the more structurally complex the habitat. This complexity, or grasses at various heights and sizes, is ideal for bird populations during nesting and roosting. Perennial grasses are also fast-growing, particularly on overfarmed, nutrient-poor soils.

There are still many more areas to be researched, including how to balance restoring grasslands with harvesting, grazing, and biofuel production. Some studies have shown that resuming normal harvest and grazing activity could ultimately decrease bird species diversity over time.

The future of grasslands and the success of bird populations relies on teamwork, writes Burkhalter. “Collaboration between land-owners, restoration practitioners, research institutions, and governmental and non-profit organizations is essential for the future of coupling successful grassland bird habitat restoration with biofuel production.”