“You have to have almost a cruel streak in you to be a successful Martin landlord.” 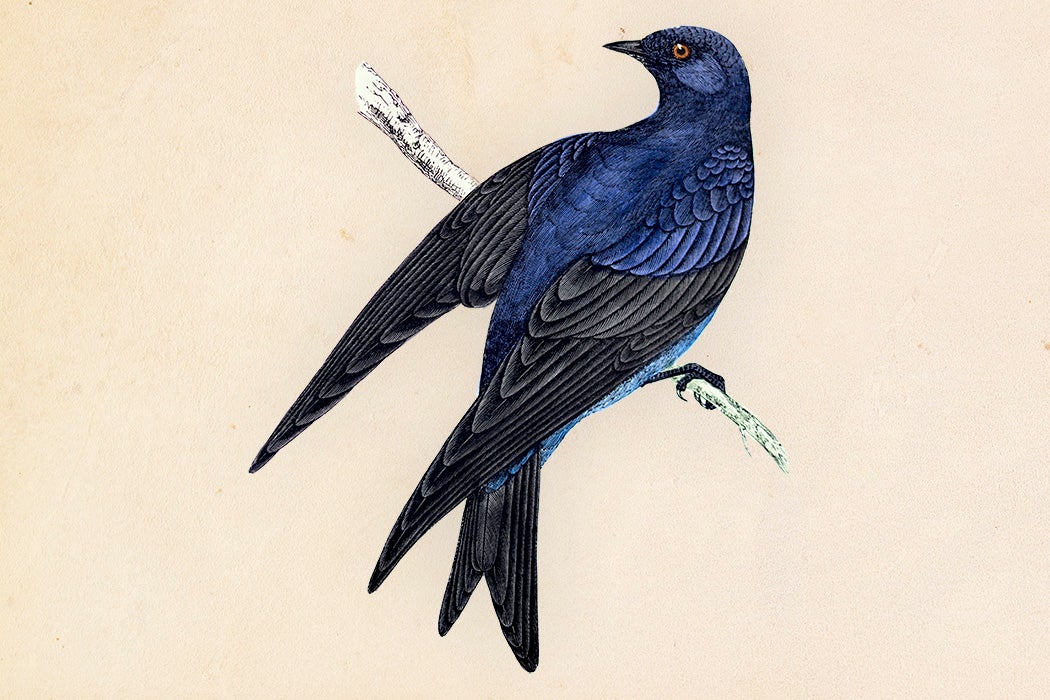 Many of us like to fill feeders for our neighborhood birds. But few people are as committed to their feathered friends as purple martin “landlords.” The martins, a large type of swallow, generally depend on humans to provide them with a safe nesting place. In a cross-disciplinary study, anthropologists Lori L. Jervis, Paul Spicer, and William C. Foster joined biologists Jeffrey Kelly and Eli Bridge to study this unique human-animal alliance.

“It is exceedingly rare to find any member of the Eastern subspecies of Purple Martins breeding in anything other than a human-provided nesting structure,” they write.

Martins can sometimes find nesting places in holes made by woodpeckers or other naturally occurring structures. But the relationship between humans and the birds is longstanding. Ethnographic reports suggest that before Europeans arrived in North America, Native American people attracted purple martins to ward off crop-damaging crow and blackbirds. And there are accounts of people, including Chickasaws and Choctaws, as well as African Americans, hanging gourds as shelters for martins in the early nineteenth century. In 1883, the J. Warren Jacobs Co. began selling elaborate martin houses with “broad porches, railings, and ornate window treatments.”

Meanwhile, with the destruction of forests and spread of non-native species like European starlings, natural spots for martin nests became scarcer. By the twentieth century, purple martins were increasingly dependent on their human landlords.

The authors spoke with some highly committed martin landlords who had volunteered to mentor others—a sample that turned out to be mostly white men from the South. They found that many of them began the hobby as children, helping a father or grandfather.

Many of the landlords said they appreciated the martins’ songs and the fact that they’re willing to let humans get close and even touch them. Some referred to them as “wild pets.”

But there’s also a harsh side to the hobby. Landlords act as protectors of the martins, killing predators and competitors that threaten them. They told the authors that they strangled or destroyed the nests of non-native starlings and sparrows—which is legal. Some also reported shooting hawks that threatened martin nests—which is not.

“I don’t think Purple Martin people—established landlords anyway—are animal welfare type people,” one study participant said. “You have to have almost a cruel streak in you to be a successful Martin landlord…you got to be willing to kill about anything else that flies up there.”

With many of the hobbyists around retirement age, some were worried that the next generation was too busy and technology-obsessed to take up the hobby—too reluctant to take part in the violent side of landlording.

“We always talk about it,” one hobbyist told the authors. “What’s going to happen in the future of the martins if a lot of the landlords, like us, pass away.”

The authors say that’s not an unreasonable concern. While purple martins aren’t officially considered threatened or endangered, their dependence on a tiny human subculture puts them in an unusual, precarious situation.

Our Long-Running Love Affair with Pigeons

Through crazes of pigeon-fancying, these birds have been reshaped into a dizzying variety of forms.