How have workers around the world sought to change their conditions, and how have racial divisions affected their efforts? 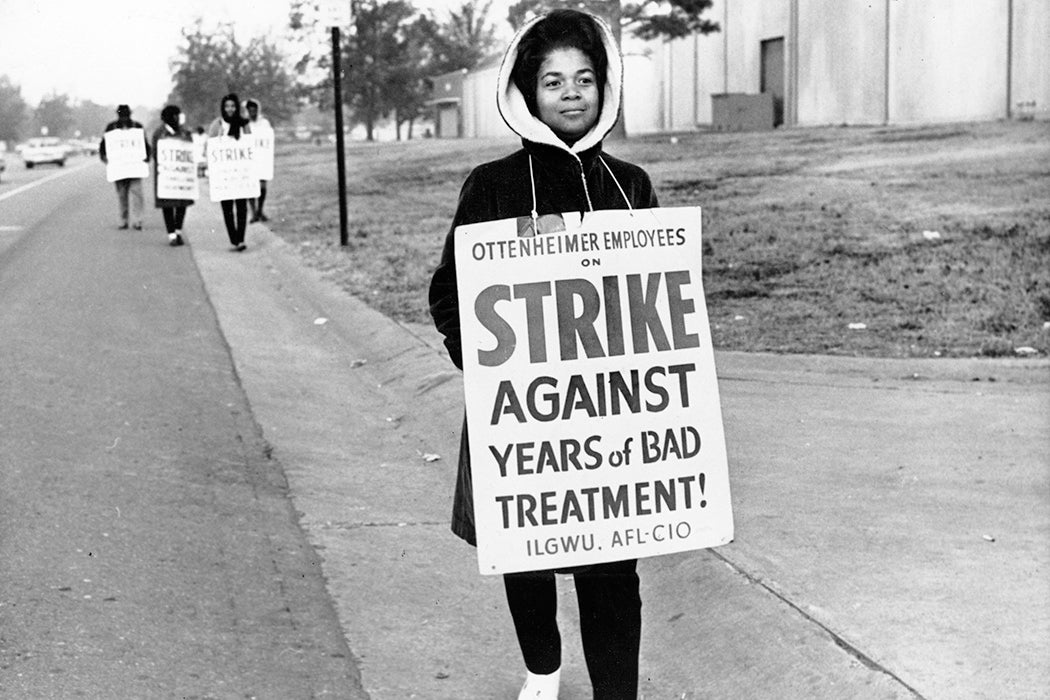 We spend many waking hours preparing for work, at work, or recovering from work, and many of us live in societies that, in the words of scholar Kathi Weeks, “expect people to work for wages.” In The Problem with Work, Weeks argues that domination and subordination are central experiences in the organization of work today. This is especially true for domination based on racial differences.

The transatlantic slave trade in the 1500s–1800s bound up capitalism with colonialism and racism. Slavery was progressively abolished starting in the late eighteenth century in Haiti and continued through the nineteenth century, but this did not bring an end to racial hierarchies or the entanglement between race, capitalism, and colonialism. Instead, the transition to free wage labor accompanied the rise of scientific racism, the rapid growth of industrial capitalism, and heightened rivalries among competing empires.

Race remained a central principle for the organization of labor in new capitalist enterprises, through differences in recruitment, working conditions, wages, and housing. For example, historian Ad Knotter has demonstrated that race and ethnicity determined the division of labor and working conditions in coal mines worldwide. But even though the most oppressed workers have fought segregation and racist working practices, others have demanded privileges and a firmer racial division of labor. Workers, in other words, are not guileless dupes or helpless victims; they are historical actors with agency, albeit often circumscribed by the structures of capitalism and imperialism.

The following works chart the global history of race and labor in the early twentieth century, highlighting the complex ways in which race, labor, and imperialism intersect.

The abolition of slavery in the British Empire in the 1830s forced plantation owners and colonial bureaucracies to turn to indentured labor from India and China.

Moon-Ho Jung traces how Chinese and Indian “coolie” workers were racialized by Caribbean sugar plantation owners, and later by American politicians, in the nineteenth century. By portraying “coolie” labor as coerced, US lawmakers easily reached a consensus against it, culminating in the 1882 Chinese Exclusion Act. As Jung points out, this consensus was “a result not so much of anti-Chinese rancor in California but of US imperial ambitions in Asia and the Caribbean[.]”

Mae M. Ngai, “Chinese Gold Miners and the ‘Chinese Question’ in Nineteenth-Century California and Victoria.” The Journal of American History, 2015

In her comparative history of Chinese miners and anti-Chinese politics in the late nineteenth-century United States and Australia, Mae Ngai attributes the racialization of Chinese “coolies” to the fact that Chinese miners outcompeted white Australian and American miners in gold mining. White miners deployed anti-Chinese racism to eliminate their competitors, as did white trade unionists and labor-oriented urban politicians. As Ngai concludes, “a common global discourse of anti-coolieism” had emerged in the 1880s “among Great Britain’s white settler colonies[.]” Similar dynamics of racialization and racism could be found in the British Empire.

Gopalan Balachandran argues that Indian seafarers “inhabited a world deeply marked by race which determined what they would do” and analyzes the role of the white British seafarers’ union in keeping Indian seafarers out of skilled work and officers’ positions.

The White Working Class in the United States

David R. Roediger, The Wages of Whiteness: Race and the Making of the American Working Class (2007)

The pioneering work on the formation of racialized classes and white working-class racism in the United States in the nineteenth century is David Roediger’s The Wages of Whiteness (1991). Roediger argues that “working class formation and the systematic development of a sense of whiteness went hand in hand for the US white working class[.]” Roediger emphasizes the agency of white workers themselves, showing that they helped create and maintain their own racial identity.

Roediger drew extensively on the work of W.E.B. Du Bois, particularly his study of race and class in the aftermath of the American Civil War, Black Reconstruction (1935). Du Bois argued that white workers in the American South accepted exploitation because they “were compensated in part by a sort of public and psychological wage,” whereby their white status accorded them a certain degree of respect from the state, unlike African Americans.

In contrast with Du Bois, Barbara J. Fields argued that the “psychological wage” was speculation that could be neither proved nor disproved and that whiteness was incoherent and explained little. It relied, she argued, on a kind of circular logic: “Whiteness entails material benefits; therefore, the material benefits whites receive are a reward for whiteness.”

US Empire and White Settler Colonialism

The expansion of European and American capital and the seizure of new territories around the world by colonial powers facilitated the dissemination of racist discourses and racial labor management practices.

David R. Roediger and Elizabeth D. Esch, The Production of Difference: Race and the Management of Labor in U.S. History (2012)

In The Production of Difference, David Roediger and Elizabeth Esch illustrate the persistent centrality of race to the ideas and practices of US labor management, including the regimes of antebellum southern plantations and the factories and mines where various immigrant groups worked.

Jason Colby demonstrates that the United Fruit Company introduced racial labor management ideas and practices to its banana plantations in Guatemala. But managers were not the only agents of imperialism and racism.

Kornel Chang, “Circulating Race and Empire: Transnational Labor Activism and the Politics of Anti-Asian Agitation in the Anglo-American Pacific World, 1880-1910.” The Journal of American History, 2009

Kornel Chang documents how white trade unionists and labor activists in the Pacific Northwest mobilized against Asian migrant and Native workers, resulting in the formation of the Asiatic Exclusion League in 1905.

Neville Kirk, “Race and Whiteness” in Transnational Radicalism and the Connected Lives of Tom Mann and Robert Samuel Ross (2017), reviewed by Melanie Nolan, 2019.

In early twentieth-century Australia, as Neville Kirk explains, the “labour movement officially committed itself to racism in the form of ‘whiteness[.]’” But, Kirk also notes, there were instances of internationalism and opposition to racist imperialism.

The imposition and maintenance of a racial division of labor was perhaps most pronounced in South Africa.

Even before the beginning of apartheid in 1948, legislation protected the jobs and wages of white workers and restricted the rights of African, Colored, and Indian workers. White workers demanded this racialized protection through radical and violent protests against their employers and the state. This was best encapsulated by the infamous slogan “Workers of the World, Unite and Fight for a White South Africa” raised by striking white miners during the Rand Revolt in 1922, a strike that escalated into a full-blown insurrection, which Jeremy Krikler analyzes in his book from 2005.

The racial division of labor was not a peculiarly South Africa phenomenon. Philip Bonner, Jonathan Hyslop, and Lucien van der Walt emphasize that the struggles and organizational form of labor in South Africa were influenced by regional and transnational migration patterns.

Beyond Black and White

The conflation of race and class identities, and discriminatory labor practices rooted in assumed differences—racial, ethnic, or national—can also be found in two non-white colonial settings: the Japanese Empire and Palestine.

Andrew Gordon examines how organized labor and left-leaning political parties in Japan embraced the imperial project of colonizing Taiwan, the Sakhalin Islands, Korea, and Manchuria during the interwar years.

Zachary Lockman shows how Jewish labor activists in prewar Palestine saw the exclusion of Arab workers from Zionist labor unions and later Jewish workplaces as vital to the establishment of a Jewish state. The Jewish workers had looked to apartheid rule in South Africa for inspiration.

Race and Labor in Britain

Tensions over race and labor in Britain are often seen as a phenomenon of the period after the Second World War, when mass migration from the Caribbean and South Asia was encouraged by the British government to fill labor shortages.

A. Sivanandan, Catching History on the Wing: Race, Culture and Globalisation (2008)

A. Sivanandan argues that while demand for labor brought workers from the Caribbean and South Asia to Britain, ‘the colonial legacy determined the nature of the work they were put to[.]”

Black communities were established in port cities long before the arrival of workers from the Caribbean and South Asia. British sailors’ unions sought to prevent black, Arab, and Asian sailors from working on British ships. These tensions exploded into a wave of rioting in the aftermath of the First World War. Jacqueline Jenkinson explores how postwar unemployment and economic competition prompted white working-class residents in port cities across Britain to turn on Black workers and their communities.

Miners, factory workers, dock workers, and office workers are not the only wage workers. Feminist labor historians have long pointed out that domestic workers and sex workers are also wage workers, even though their labors are engaged in the intimate work of caring for others. In colonial and postcolonial societies, this intimate work is largely performed by women of nonwhite and/or migrant backgrounds, a fact that underscores how race and gender shape the division of labor.

Seungsook Moon, “Regulating Desire, Managing the Empire: U.S. Military Prostitution in South Korea, 1945–1970.” Over There: Living with the U.S. Military Empire from World War Two to the Present (2010)

Seungsook Moon’s book chapter on Korean sex workers on US military bases in South Korea illuminates the entanglements of race, gender, and imperialism.

Racial labor practices and racial violence against migrant labor shaped labor relations in empires and colonial societies during the late nineteenth and early twentieth centuries. These racist ideas, practices, and institutions did not go unchallenged.

Julia Martinez observes of the multiracial working community in Australia’s Port Darwin that white unionists’ increased contact with labor unions in Asia and mixed social activities outside the workplace eroded many white workers’ racist assumptions and stereotypes. Industrial unions and communist parties were also instrumental in confronting racial hierarchies in workplaces and racism in labor unions.

Peter Cole, “Philadelphia’s Lords of the Docks: Interracial Unionism Wobbly-Style.” The Journal of the Gilded Age and Progressive Era, 2007

Peter Cole recounts how the Industrial Workers of the World organized Philadelphia dockworkers, who were divided along racial and ethnic lines, into an integrated union during the years 1913–1922.

Robin D. G. Kelley describes how African-American Communist Party members in 1930s Alabama combined Black resistance traditions with Marxism to campaign and protest against local issues of racial inequality and economic injustice. The anticommunist climate in the United States during the 1940s and 1950s brought about the decline of the Communist Party, but the rise of the Civil Rights Movement in the late 1950s and 1960s opened a new chapter in the history of interracial labor movements.

Peter Cole, “No Justice, No Ships Get Loaded: Political Boycotts on the San Francisco Bay and Durban Waterfronts.” International Review of Social History, 2013

Editor’s Note: This list has been updated to include publication dates.