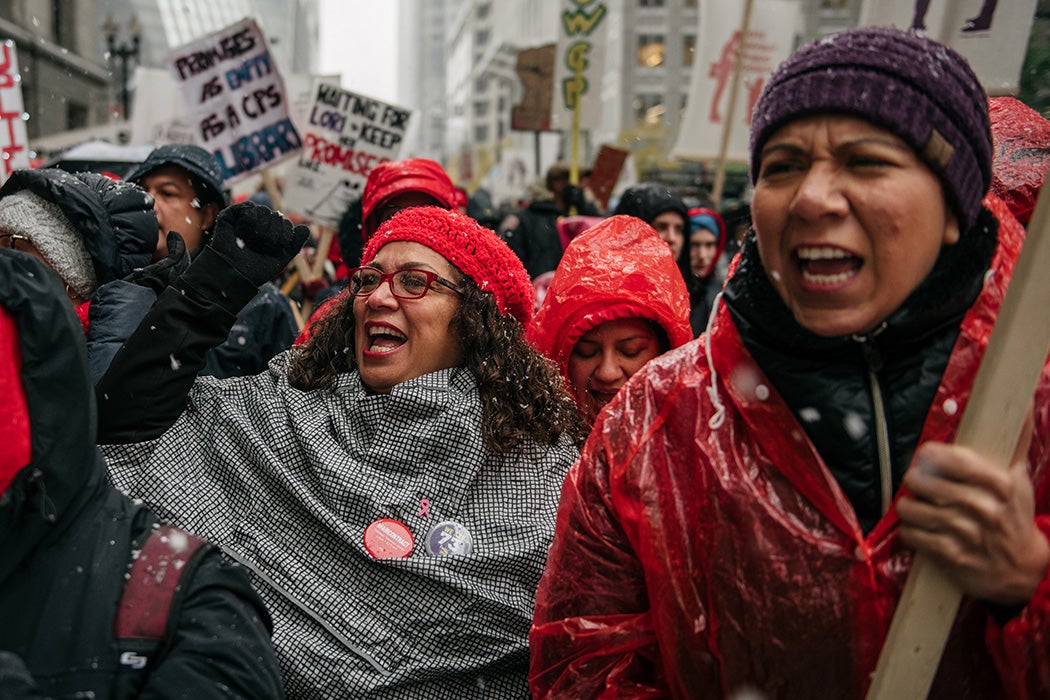 Thousands march through the streets near City Hall during the 11th day of an ongoing teachers strike on October 31, 2019 in Chicago, Illinois.
Getty
By: Wilson Sherwin
5 minutes
Share Tweet Email Print

Depending on whom you ask, socialism might be described as historically inevitable, evil incarnate, a utopian fantasy, or a scientific method. Most fundamentally, socialism is a political, philosophic, and economic system in which the means of production—that is, everything that goes into making goods for use—are collectively controlled, rather than owned by private corporations as they are under capitalism, or by aristocrats under feudalism.

In seeking to make the case for socialism—and to understand impediments to a world governed by people’s needs rather than corporate profits—thinkers in the socialist tradition have grappled with topics as varied as colonialism, gender, race, art, sex, psychology, economics, medicine, ecology, and countless other issues. As such, this Reading List makes no claim of being exhaustive; rather, it seeks to achieve two modest goals: to acquaint readers with a handful of key socialist preoccupations, and to demonstrate how the core concepts of socialist thought have been articulated at different historical moments and taken up by women and people of color.

Eugene W. Schulkind, “The Activity of Popular Organizations during the Paris Commune of 1871.” French Historical Studies, (1960)

What kind of society do socialists want? Many unfamiliar with the socialist tradition assume the Soviet Union or other putatively communist states represent socialist ideals come to fruition. But for many socialists throughout history, the most generative and compelling model is the seventy-two-day social experiment known as the Paris Commune. During their brief time ruling Paris, the communards eliminated the army, secularized education, equalized pay, and implemented numerous feminist initiatives, including establishing child care centers and abolishing the distinction between “legitimate” and “illegitimate” children.

Rosa Luxemburg, “Reform or Revolution” (1900)
Socialists uniformly believe that different social arrangements are needed to address social problems, but how might those transformations most effectively come to fruition? One of the major questions that has animated socialist debates throughout the centuries is whether it is possible to achieve socialism through progressive reforms, or whether reforms would only serve to strengthen capitalism. Here the revolutionary presents her thoughts.

Clara Zetkin, 1914 Preface to Edward Bellamy’s Looking Backward (1887) in Utopian Studies, 2016
Karl Marx was famously opposed to rigidly outlining what future socialist societies should look like, claiming that this would be like writing “recipes for the kitchens of the future.” Despite his reticence, many artists, frustrated by the constraints of capitalism and captivated by the promises of socialist futures, have contributed to imagining alternative worlds. Edward Bellamy’s early science fiction novel Looking Backward presents one attempt at envisioning a socialist society of the future—free from war, poverty, advertisements, and other unpleasantries. Here, Clara Zetkin, a prominent socialist and feminist activist of the nineteenth and twentieth centuries (best known for her efforts to establish International Women’s Day), introduces the novel.

Eric Foner, “Why Is There No Socialism in the United States?” History Workshop, 1984
One of the country’s best living historians examines questions that have preoccupied generations: How does the political and economic exceptionalism of the United States shape its historical relationship to socialism? Why does the U.S. working class appear less inclined toward socialist class consciousness than in other “advanced” capitalist countries?

Cedric Robinson, “C.L.R. James and the Black Radical Tradition.” Review (Fernand Braudel Center), 1983
Telling the story of C.L.R. James, one of the most important socialist intellectuals of the twentieth century, Cedric Robinson (an intellectual giant in his own right) traces the history of socialism as it crosses continents and oceans. Centering Black radicals, not as a homogenous group but as members of a multifaceted tradition who write as seamlessly about cricket, anticolonial struggles, and class formation, Robinson takes the reader through issues at the heart of socialism.

Combahee River Collective, “A Black Feminist Statement” (1978) in Women’s Studies Quarterly, 2014
“Identity politics” has become a controversial and often derided topic in recent years. In this groundbreaking text, the Combahee River Collective—a group of Black feminist socialists named for the location from which Harriet Tubman launched one of her major military missions—underscores the necessity of rooting anti-capitalist projects in people’s lived experiences: “We believe that the most profound and potentially most radical politics come directly out of our own identity.”

Sarah Leonard, “What is Socialist Feminism?” Teen Vogue, 2020
Teen Vogue may have once evoked adolescent frivolity, but in recent years the magazine has repositioned itself as a serious contributor to the rising popularity of leftist politics among bright young people, thanks to its rigorous and accessible political analysis. Here, socialist feminist writer Sarah Leonard draws from bell hooks, Congressperson Alexandria Ocasio-Cortez, and the 1970s feminist collective Wages for Housework to outline a few key socialist feminist insights. For those interested in pursuing the topic further, Leonard encourages readers to connect with the extensive resources generated by the Democratic Socialists of America (DSA)’s Socialist Feminist working group.

Brett Clark and John Bellamy Foster, “Marx’s Ecology in the 21st Century.” World Review of Political Economy, 2010
Marx may have written in the nineteenth century, but his insights are still used by contemporary thinkers to understand many of today’s most pressing issues. Here Clark and Foster draw from central concepts in Marx’s oeuvre to understand how capitalism has led to climate catastrophe and, eventually, might inspire ecosocialism. In their words, “The power of Marx’s ecology is that it provides a rigorous approach for studying the interchange between society and nature, while taking into consideration the specific ecological conditions of an ecosystem (and the larger web of nature), as well as the particular social interactions as shaped by the capitalist mode of production.”

Michael Lowy and Penelope Duggan, “Marxism and Romanticism in the Work of Jose Carlos Mariategui.” Latin American Perspectives, 1998
A compelling introduction to Mariategui, the Peruvian socialist philosopher who merged precolonial history, romanticism, and a trenchant analysis of capitalism. In contrast to the austere world many antisocialists imagine, “[s]ocialism according to Mariategui lay at the heart of an attempt at the reenchantment of the world through revolutionary action.”

Red Nation, “Communism Is the Horizon” (2020)
In their recent pamphlet, the Indigenous collective Red Nation expounds upon the centrality of queer, Indigenous feminism to their understanding of socialism and their struggle toward a communist horizon.

Editor’s Note: This list has been updated to include journal titles.