I say “Harvard” and you say “Hahvahd” 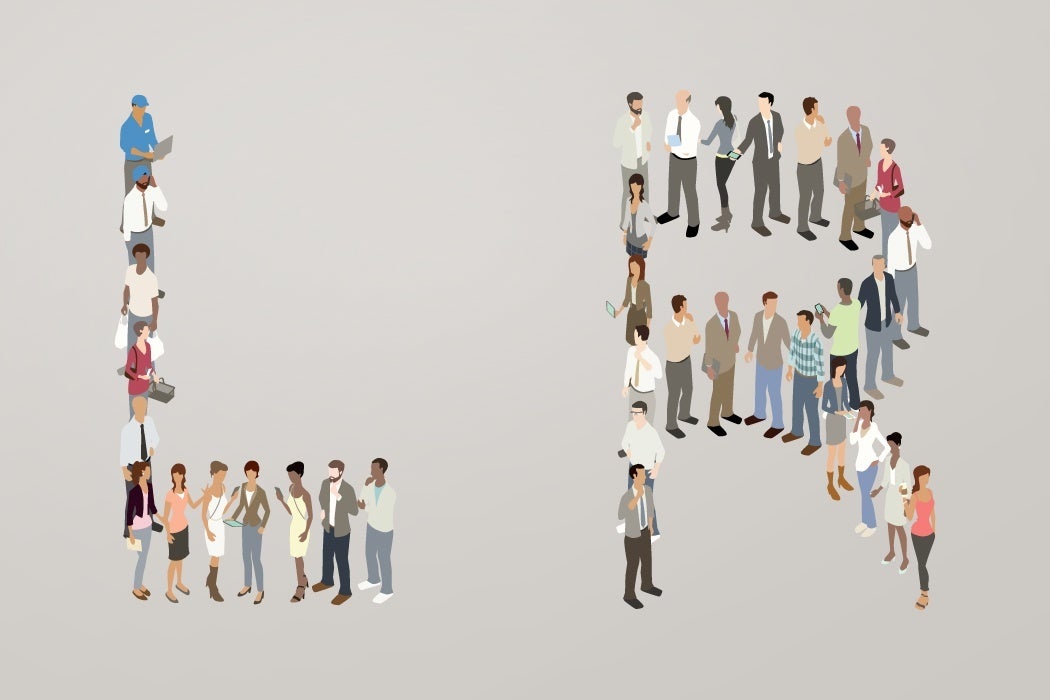 Did you hear about the man from Bristol who named his daughters “Evil,” “Idle,” and “Normal”? And just why are some politicians so obsessed with a couple of shady characters known to the public as “Laura Norder” and “Lauren Forcement”?

Apart from being old chestnuts that would probably only make sense to you if you’re a linguist (or from Bristol), these jokes demonstrate some peculiar kinds of sound changes that are happening slowly under our very noses.

The sound changes that occur in languages over time can sometimes seem…a little odd. What causes them? Why do some sounds change and not others? For instance, way back in the blurry past, Bristol was once known as Brigstowe (or, in Old English, Brycgstow, meaning “place by a bridge”). There is no historical letter “l” in either of those names—so where the L did this mysterious tag-along come from?

It’s been suggested that appending an “l” at the end of a syllable was seen as more “correct” and thus started appearing in all sorts of places.

The old sea-faring city is a byword in the English language for all things correct, as in the phrase “ship-shape and Bristol Fashion.” But some might say that those in Bristol go to extremes and have moved from “correct” to “hypercorrect” in their language. The local Bristolian accent is notorious for a linguistic quirk known as intrusive-l, where some speakers seem unable to help themselves from adding a so-called dark “l” to syllables and words ending in certain neutral vowels—even going so far as to change the historical name of their city. It’s been suggested that appending an “l” at the end of a syllable was seen as more “correct” and thus started appearing in all sorts of places as speakers overcompensated, hypercorrecting words that never had an “l” to begin with.

Words like “areal” (area), “ideal” (idea), “pianol” (piano), “drawling” (drawing) and even the odd “bananal” (banana) have been noted. “Mango” becomes a homophone of “mangle” and “tango” sounds just like “tangle”. Check out this recording from the British Library Sounds collection for a few examples:

Speakers from Knowle West in Bristol

To many, this might seem ever so slightly weird. Why add an “l” so randomly? Is this just a peculiar feature of Bristol English, which is incidentally also famous for lending its unique accent to popular film depictions of pirates? Maybe Bristolians are just a little odd? Arrr, me hearties, what’s really going on here?

Rather than ask Robert Newton, the pirate who started the linguistic craze known as intrusive-arrr, let’s see what Mr T, from Rocky 3, has to say:

Pity the Foo’ and L-Vocalization

As English speakers, we’re kind of conditioned to think we hear an “l” where we see one in the word, but Mr T’s lip rounding at the end of “I pity the fool” is an indicator that he drops the “l” at the end of “fool”. He’s actually pitying the foo’, and by doing so Mr T is representing countless English speakers who do the same, without even realizing it. Cockney English in particular is famous for it, along with other non-standard dialects of English such as AAVE (African American Vernacular English). It’s the curious inverse of the Bristolian case, where an “l” exists in the word, yet it isn’t actually pronounced, even if it sounds like it is.

Though it may be a little difficult to detect consistently, on the whole, there’s a well-documented sound change happening here. Once as a humble research assistant, I spent a summer cooped up in a dark room listening to countless strangers repeat words containing a syllable-final “l”, such as “milk” (which can sound more like “miwk”), “palm” (“paam”), “children” (“chiwdren”), “bottle” (“bottu”) and “cool” (“coo”). These words all contain just the right environment for the “l” to be replaced by some pod-person in the form of a vowelish sound that most people might still hear as an “l”. You may even be doing it yourself. Surprisingly, it’s found virtually everywhere…and it’s spreading. Sociolinguistic studies have shown that this emerging sound change, called l-vocalization, is widespread in dialects of English, from regions across the UK, Australia, New Zealand and yes, even the US, where it’s been observed all over, from California to Appalachia to Pennsylvania.

Though the Queen may not at present speak with l-vocalization, over time, the Queen’s English may soon resemble Mr T.’s English.

Depending on the dialect, the replacement of “l” by a vowel can be overt or rather subtle. As a feature that is marked in non-standard dialects, once it’s observed it can be socially stigmatized, as pronunciation changes deviating from the standard is popularly seen as being lazy or uneducated. When this happens, the linguistic environment is ripe for hypercorrection to occur, as l-vocalization’s opposite number, intrusive-l, encourages “l” to reemerge, sometimes where you least expect it. But increasingly, l-vocalization is moving unnoticed into standard dialects of English, including British Received Pronunciation (RP), such that John Wells, an expert on accents of English, predicts that “it seems likely that it will become entirely standard in English over the course of the next century.” That is to say, though the Queen may not at present speak with l-vocalization, over time, the Queen’s English may soon resemble Mr T.’s English, in this respect at least.

The pattern of “l” being replaced by vowels might remind you of another, more famous sound difference: the mysterious disappearance of the “r” in certain otherwise respectable dialects. It’s one of the more noticeable phonological features separating American English and British English. Dialects of English are classed into “rhotic” (those that pronounce syllable-final “r”, such as Standard American, Canadian, Irish English dialects) and “non-rhotic” (RP, Australian English, and New Zealand English, not to mention certain Bostonians who ‘pahk the cah in Hahvahd Yahd’). These days, rather than attributing this to linguistic laziness, it is mostly seen as an amusing quirk, as words like “tuna” are conflated with “tuner”.

But getting back to pirates—linguists have long noticed that particularly in non-rhotic dialects, where the syllable-final ‘r’ is no longer pronounced, there’s this oddball phonological phenomenon cropping up known as, you guessed it, the intrusive-r. These intruders appear at the end of words and syllables where no /r/ has historically been. Rather than policing these intruders, it seems law and order is in on it. A phrase like “law and order” sounds more like “Laura Norder” (law[r] and order) while “Honda Accord” sounds like “Honda Record” (Honda[r] Accord). So what’s the big idear? Well, Jennifer Hay and Andrea Sudbury’s 2005 study of New Zealand speakers suggests that the loss of “r” in a dialect is strongly tied to this appearance of “r” popping up in unexpected places. Perhaps you can’t have one without the other?

Indeed, other studies, such as Bryan Gick’s on intrusive consonants in English reveals that far from the belief that “the intrusive r has remained, in the eyes of most linguists, an isolated quirk of English history, or, as one phonologist […] has called it, ‘the phonologically unnatural phenomenon of r-epenthesis'” a natural, parallel relationship between the behaviors of “l” and “r” can be made. Where you have r-vocalization you often seem to have intrusive-r showing up. Under the right conditions, this phenomena can be seen with l-vocalization and the intrusive-l as well.  Gick in fact shows that the intrusive-l isn’t unique to Bristol. Overlapping with some of those regions in the US that happen to have strong l-vocalization, there’s ample data showing that intrusive-l is alive and well. “The intrusive l is a surprisingly widespread phenomenon, showing patterns similar to those seen in intrusive r. Its use has been primarily identified with working class and rural dialects in Pennsylvania, Delaware and other areas of the northeastern United States, though it has been reported in all other regions of the country except the Northwest.”

What’s so special about these sounds? Both of these consonants exhibit a kind of liquid courage in the way they act as vowels sometimes—we’ve discussed how these are some of the ‘vowel-like’ consonants more likely to be found as syllabic consonants above others for instance. In a way, they can both pretend to be vowels and under the right conditions, vowels can pretend to be them.

So if r-vocalization and intrusive-r go hand in hand, what can we say about the Bristol-L? In a weird interplay between so-called hypercorrection and phonological innovations, Bristol English also has a kind of l-vocalization, which possibly could have initiated the intrusive-l hypercorrection. According to Jonnie Robinson, Lead Curator for Sociolinguistics at the British Library, “you might think, therefore, that pairs like idea and ideal or area and aerial are indistinguishable in Bristol dialect, but in fact speakers who use Bristol L invariably convert word final <l> to a weak vowel so that aerial is pronounced ‘area’ thus maintaining the distinction.”

So in a fairly weird inversion, for some Bristol speakers it appears “aerial” is really “area” and “area” has become “areal” and thus the awkward sound change dance has come full circle. Find this confusing? Maybe we should ask those wonderfa’ Bristolian sisters Eva(l), Ida(l) and Norma(l) how they fee(l). 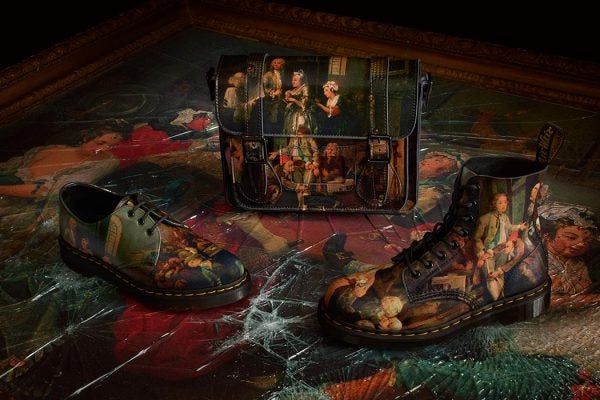 The Sartorial Canvas: How the Iconic Dr. “Doc” Martens Reflect a Culture

The iconic Dr. "Doc" Martens boots seem to have shifted their own image, expanding its reach and popularity.