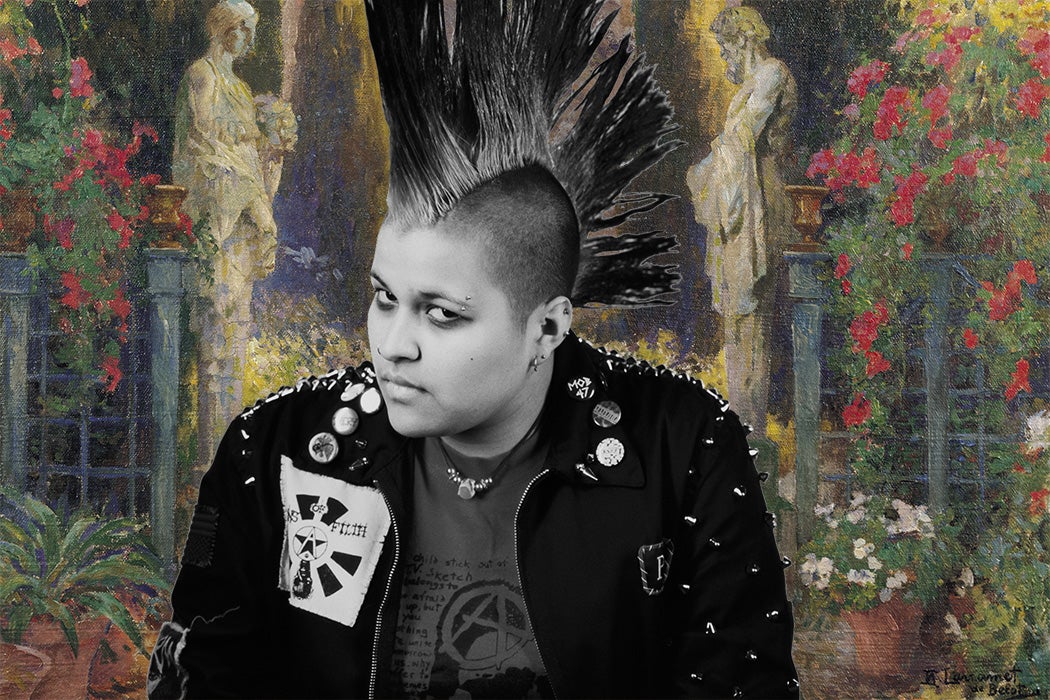 In these tumultuous times, it’s not at all surprising that cottagecore, the popular internet aesthetic born from technology yet in celebration of a slow, pastoral life, is having a cultural moment. Cottagecore as a movement has become a kind of a shared community nostalgia for an idealized countryside cottage life, nestled in nature, where the social isolation so necessary in modern pandemic times becomes something enjoyed rather than endured. Against a persistent news feed of contagion and quarantine, health experts have continually advised people to stay home, not to travel to visit their families and their friends, at the very time the need for human connection is greater than ever.

With so many of us homebound, cozy, old-fashioned domestic hobbies like baking bread, knitting, gardening, and jigsaw puzzles have exploded in popularity. But the act of simply engaging in these novel domestic crafts on your own is not entirely the point anymore. There’s a newfound pleasure in the sharing and bonding over these hobbies among our now-virtual friends and a wider audience, helping to flesh out the boundaries of these common interests into the kind of communities that cottagecore and other nostalgic internet movements represent. A sense of comfort and togetherness is something many of us yearn for, a stay against the compounding stresses of daily life in an ongoing pandemic age. It’s something we can all instinctively understand—but how do we articulate what this means in a language or culture that may have never valued these senses enough to find the words for it?

Understandably, many have looked to Scandinavians—some of those who love the long isolation of winters best—for a way to turn their minds from hardship to coziness.

It’s tempting for people in one culture to draw on words from other languages to capture things that are inexpressible in their own language. Understandably, many have looked to Scandinavians—some of those who love the long isolation of winters best—for a way to turn their minds from hardship to coziness, and from the outside world toward home. Now more than ever, a sense of home as a place of safety, as something to be truly lived in, and not something to leave every day on your way to other places, has become more meaningful.

Borrowed Danish words like hygge, for example, have had their own cultural moments in the Anglosphere amid chaotic times, but never generally took off as anything other than a consumer lifestyle trend. While some English speakers have enthusiastically tried to adopt the term, it’s quickly become an idea that has been commodified in terms of the sales of books, candles, socks, and other comforting household items that promise purchasers an easy (and luxurious) way to feel the hygge. As many have pointed out, trying to buy a way into this homespun lifestyle rather defeats the purpose, and there’s not much of a human connection between two consumers who buy the same hygge socks.

How do we fully understand the world these strange new words encompass, much less adopt them? As it happens, way back when, even the Danes borrowed the handy concept of hygge, meaning “well-being,” from the Norwegians. While most Scandinavian and Germanic cultures are similar in how they value this concept of cozy comfort and togetherness in their ways of living, the word hygge itself started appearing in Danish texts in the nineteenth century and evolved into a central element of Danish cultural life today.

The Norwegians, for whom the idea of home and home life is central, are such hardcore enjoyers of cozy good living that they also express this through the concept of kos (noun) and koselig (adjective), which happen to be etymologically close enough to English cozy to be, perhaps, more memorable. The English word “cozy” is most often used in translation, however; “cozy” is but a shadow of what a koselig life could be. To be koselig is to prize a cozy comfort, warmth, and well-being, and an intimate togetherness among friends and family, no matter what the weather or the world may bring. One can be koselig in the most rustic conditions of a hytte (cabin) with no plumbing or frolicking in the outdoors in the bitter cold.

It’s been argued that this koselig mindset is one reason for all this love of a cold climate. Even in the northernmost towns, where the sun hardly shines during the long winters, Norwegians reportedly have low rates of seasonal depression. The koselig lifestyle, with the enjoyment of nature and the outdoors at its center, can affect how Norwegians approach days that can be fairly miserable for many others. Things that are koselig often seem to be practical and plain rather than fine and fancy, made special by taking a moment to appreciate them, whether with others or alone, perhaps enjoying a hot beverage in a quiet, cozy corner. “Kos” can even be appended to another word to form compounds that lexicalize a simple, pure enjoyment, such as peiskos, which literally means “fireplace coziness”; tv-kos, for “television coziness,” presumably means you have cozy socks on while watching Norway’s infamous slow TV of seven-hour train rides in real time.

This is all well and good, but how are non-Norwegians to understand it means, much less borrow these concepts of koselig living for their own lives? While kos and hygge carry with them cultural meanings that may never become truly rooted in the English language, it’s not impossible for English speakers to understand or value the art of living cozily. In a similar way, cottagecore longs for an idealized domestic home life, of enjoyments in household crafts such as baking and a return to the natural world, but with the freedoms of modern society. Although the aesthetics and the longing for this idealized life may not be fully authentic, the participation in many of its arts and crafts often are. Although this aesthetic plays with the idea of simple living on display, as vignettes to be shared, many of those who are participate in cottagecore, by taking an intimate enjoyment in slow living and sharing these moments with others, end up adopting a lifestyle akin to a Norwegian koselig one.

For English speakers to infer for themselves what this all means, the term cottagecore is handier than a borrowed word from another language, like hygge, seemingly unanchored to any native semantics. This is because “cottagecore” is a special kind of compound word where two forms are blended together, as in cottage + -core, and though one of the forms is mysteriously truncated, thanks to its own community of shareable words, it ends up developing a salient meaning for speakers of that language.

Adrienne Lehrer’s work on these compound blends looks at words that grew out of many similar “splinter” forms, such as workaholic or chocoholic, from work/chocolate + alcoholic; walkathon, bikeathon, or telethon, from walk/bike/tele + marathon; or Irangate from Iran + Watergate. In many of these blends, though one form has been (sometimes) heavily truncated, they’ve been productively used and shared enough to start developing a recognizable and salient semantics. Any native speaker encountering one of these neologisms for the first time has a good chance at guessing what it might be about. For example, marathon is technically a race on foot of about 26 miles (43 km), but the active use of the -thon form has evolved its practical semantics to some event that lasts a while and requires endurance. Meanwhile, -gate forms don’t become a kind of gate such as a garden gate, but are subtly understood to be a kind of great scandal.

Similarly, new terms such as cottagecore are born out of a long tradition of the use of -core as a morpheme, especially in music, film, and art aesthetics: mumblecore, queercore, grindcore, mathcore, and of course, the original punk rock genre hardcore. Hardcore as a word has had a pretty interesting history. Back when it was merely the rough-and-ready rubble used as a crucial foundation in road building, it eventually made the metaphorical leap to being a kind of deeply intrinsic, serious, or extreme element of something, such as “the hard core of the Unionist Party” or “the problem of hard-core unemployment.” Its widespread use in pornography in the 1950s is presumably due to a play on words. So it was not until the 1970s saw the emergence of the more aggressive hardcore punk music genre that -core really took off as a productive form. Thanks to offshoot music and other artistic movements, -core has developed a very specific semantics of not just mere genre. For some, -core comes with a semantic nuance of “militant, fiercely loyal,” as befits active fandoms that share and engage and help shape their genre into something new.

Cottagecore, then, is a surprisingly apt juxtaposition of the grimy, gritty authenticity of punk rock with a stylized idea of rural life, sometimes equally wild and grim in nature. Cottagecore gives its fans a way to celebrate the kos of the rougher and more rustic aspects of good living—a new way to understand this uncertain world.

How to Have a 'Good Home': The Practical Aesthetic and Normativity in Norway
By: Pauline Garvey
Journal of Design History, Vol. 16, No. 3, Anxious Homes (2003), pp. 241-251
Oxford University Press on behalf of Design History Society
Scapes, Holics, and Thons: The Semantics of English Combining Forms
By: Adrienne Lehrer
American Speech, Vol. 73, No. 1 (Spring, 1998), pp. 3-28
Duke University Press 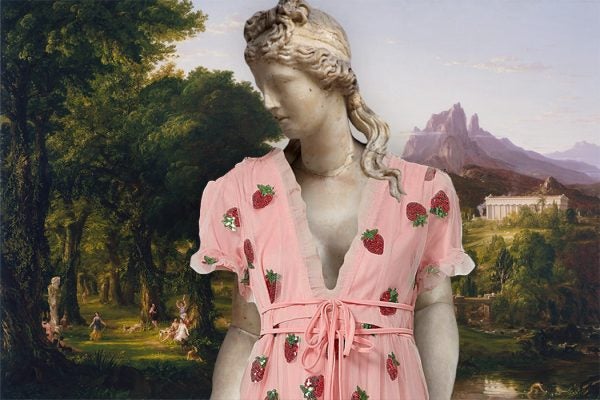 Keeping cozy in a countryside escape, through the ages.