What’s Behind the Pandemic Puzzle Craze?

Puzzles, or “dissected maps,” were invented in Georgian-era England, probably by a mapmaker named John Spilsbury in the early 1760s. 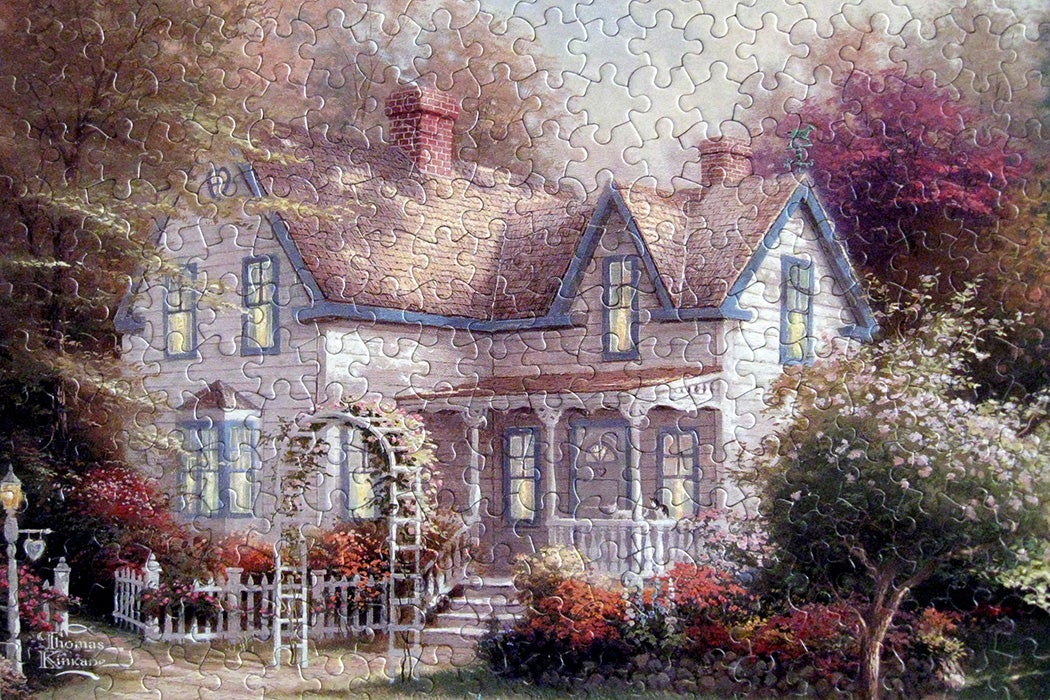 Jigsaw puzzles have made a major comeback in 2020. In the spring, when the first shelter-in-place orders were issued in many regions of the country due to the novel coronavirus pandemic, there was a surge in demand for puzzles. Puzzle makers saw sales go up by 300 to 400%, and, due to the pandemic-related pause in production, quickly sold out of popular items. As this seemingly endless year has dragged on—with record-breaking numbers of COVID-19 cases in the U.S.—sheltering in place isn’t ending anytime soon.

Puzzling, which many adults find to be both meditative and engrossing, is particularly well-suited to staying at home. With all the tragedy, anxiety, and uncertainty stemming from the pandemic, one way to stop doom-scrolling is to literally unplug from devices and do a puzzle. You can have music or TV on in the background while puzzling, but you can’t really be on social media.

Perhaps not surprisingly, the use of puzzles as a way to escape from large-scale societal problems has historical precedents. The last time interest in puzzles spiked so quickly? The Great Depression, an era with many parallels to the present. But first, let’s go back to the puzzle’s origins.

As the librarian and historian Jill Shefrin notes, puzzles, or “dissected maps,” were invented in Georgian-era England, probably by a mapmaker named John Spilsbury in the early 1760s. The earliest English table games were geographical, and the publishers were often map engravers and sellers. Relevant to this connection between puzzles and geography, writes the librarian Jennifer Burek Pierce, is the way these objects dovetailed with the imperialist agenda of eighteenth-century England and its conquest of non-western territories. Maps were thought to inculcate nationalism in the populace.

Shefrin describes early puzzles and other table games as “often beautiful pieces of craftsmanship—engraved, hand-colored, carefully mounted, folded, cut or otherwise assembled—and very expensive. The wooden boxes for the puzzles were made from mahogany or cedar, and the puzzles themselves backed with thin mahogany board.”

Shefrin, shedding on the ideology of puzzling, also notes that “[t]he more secular society of the eighteenth century maintained a belief in inculcating moral and social values, ensuring a continued didactic element in children’s literature and pastimes.” Interestingly, French games made for adults were generally about love and matrimony, while English ones emphasized notions of morality and religious belief.

Puzzles and other educational games in eighteenth-century England also held a gendered connotation. According to Shefrin, a well-known educator emphasized mothers’ symbolic importance in their children’s education and “the importance of spending time with children both at home and outside, warning, like Locke and Rousseau, of the irreparable harm done by leaving children to the care of a nursery maid.” Ironically, more than 200 years later, our current situation (the pandemic) has forced hundreds of thousands of mothers back into the role of teaching their children—or at least managing their distance learning—and out of the workforce.

Puzzles were also a part of the newly developed culture of gift-giving during Christmas in the early nineteenth century, as examined by the historian Joseph Wachelder. He divides common gifts into different categories, placing “dissected maps” into the category of “intellectual toys.” They were often advertised alongside “fancy goods for adults” in order to appeal to women. Wachelder also stresses the moral component of children’s toys during this time, which were advertised as being both instructional and amusing.

By the mid-nineteenth century, the children’s toy industry had greatly expanded, and non-didactic games began to outsell educational games (like puzzles). It was at this point that the market for puzzles began to shift. In the last quarter of the nineteenth century, librarians saw the importance of attracting younger children to libraries, and, as Pierce writes, children’s rooms became common, filled with toys and “dissected maps.”

Beginning in the 1870s, puzzles gradually shifted from being an activity associated exclusively with children to an adult form of amusement as well. Amy Pepe, of the Geneva Historical Society, identifies three major puzzle crazes, the first of which lasted from 1907 to 1911. Particularly in the northeast, the popularity of puzzles skyrocketed:

A May 1908 New York Times headline proclaimed “New Puzzle Menaces the City’s Sanity. Young and old, rich and poor, all hard at work fitting cut-up pictures together. Solitaire is forgotten. Two clergymen, a supreme court justice, and a noted financier among the latest converts to the craze.”

Then as now, puzzling had a strong psychological pull: it offered a distraction from life’s problems.

However, as Pepe notes, contrary to the sensationalist headline, puzzling wasn’t accessible to all. It was an activity associated with the wealthy, who did puzzles at vacation homes and during lavish house parties. At the time, a 400-piece puzzle cost $4; the average American worker earned only $12 a week. In response to this economic inaccessibility, puzzle clubs and rental libraries sprung up. Then as now, puzzling had a strong psychological pull: it offered a distraction from life’s problems.

Game manufacturer Parker Brothers, founded in 1883, employed primarily women to produce its puzzles. Although the company insisted it was because of their smaller hands, and thus greater ability to cut intricate pieces, it was actually a money-saving tactic, Pepe says, as women could be paid less than men: “Women were paid piece work until the federal minimum wage was enforced in 1937 and were expected to cut at least 1400 pieces per day.”

The second major puzzle craze coincided with the Great Depression, when many were out of work and in need of cheap entertainment. By this time, puzzle production was cheaper—made possible by a switch from wood to cardboard—and the activity became more accessible for everyone: a 300-piece puzzle cost only around 25 cents.

By 1933, puzzle manufacturers were making 10 million puzzles a week, a majority of which were advertising puzzles. Pepe writes:

Some of the jigsaw puzzle images were in and of themselves advertisements for the company, some featured a pleasing image with the name of the company on it, like the one for the Geneva Baking Company. Still others were double sided.

Skilled workers who were out of work got into the puzzle manufacturing business, hand-cutting wooden puzzles at home.

According to the game scholar Scott Nicholson, puzzle contests became popular during the Great Depression: unemployed people would visit libraries and work through challenging puzzles, competing for a monetary reward. Non-compensated contests were also popular, via the weekly jigsaw puzzle—which cost 25 cents and was sold on newsstands every Wednesday.

Pepe describes puzzle images during the Depression as “nostalgic, romantic, and exotic, ‘an antidote for the hard times.’” She explains: “Historical images, seascapes, paintings of cottages and lighthouses were all popular choices. Puzzles could also depict movies stars, political cartoons, and events such as the Chicago World’s Fair, but never alluded to the economic situation.” Thus it’s not surprising that as the economy began to recover with the New Deal, interest in puzzles declined.

The historian Anne Williams, speaking to CNBC about the surge in puzzling during the Great Depression, gets to the heart of why puzzles can be so appealing in times of great societal upheaval: “It’s something you can control… It’s also a challenge over which you can prevail.”

A 2018 poll conducted on behalf of game company, Ravensburger, found that 59% of people surveyed found puzzling to be relaxing, and 47% felt it relieved stress. In other words, for many, puzzling has a calming effect. Unlike actual meditation, whose goal is to quiet the mind and be fully present in the body, working on puzzles involves active brain work, sometimes even strategy. Puzzling is engrossing because it taps into an ambition to challenge oneself and finish a project in order to feel a sense of accomplishment.

In his essay on puzzling, English professor Tim Morris ruminates on the various feelings the activity provokes. One of the most satisfying, he writes, is the teleological aspect—there’s only ever progression when you’re working on a puzzle, never retrocession. And, at a certain point when you’ve completed enough of a puzzle, the drive to finish kicks in and propels you to the finish line.

But along with its meditative and goal-oriented aspects, puzzling also involves moments of frustration. Morris describes the stop-and-start feeling of working on a challenging puzzle: sometimes you can go an hour without being able to put two pieces together:

…indifference gives way to despair, and you get up and see what’s on Nickelodeon. But you come back the next day and—hello, what’s this? You recognize that hook on that piece, it fits right in the eye on the one over here! …in a matter of minutes, a dozen pieces go together and a little patch of sky shows over the horizon.

Much like life, a puzzle-related obstacle can feel insurmountable, but with fresh eyes and some time away, a solution presents itself.

We’re in the midst of the worst recession since the Great Depression. But this time, not only have many people been laid off—we have also had to stay at home and limit contact with people outside our household. This makes inexpensive, indoor activities like puzzling particularly attractive, especially with the winter months upon us.

“Make it a Pleasure and Not a Task”: Educational Games for Children in Georgian England
By: Jill Shefrin
The Princeton University Library Chronicle, Vol. 60, No. 2 (Winter 1999), pp. 251-275
Princeton University Library
The Reign of Children: The Role of Games and Toys in American Public Libraries, 1876-1925
By: Jennifer Burek Pierce
Information & Culture, Vol. 51, No. 3 (2016), pp. 373-398
University of Texas Press
Toys, Christmas Gifts and Consumption Culture in London's "Morning Chronicle", 1800—1827
By: Joseph Wachelder
Icon, Vol. 19, Special Issue Playing with Technology: Sports and Leisure (2013), pp. 13-32
International Committee for the History of Technology (ICOHTEC)
Playing in the Past: A History of Games, Toys, and Puzzles in North American Libraries
By: Scott Nicholson
The Library Quarterly: Information, Community, Policy, Vol. 83, No. 4 (October 2013), pp. 341-361
The University of Chicago Press
Puzzlement
By: TIM MORRIS
The American Scholar, Vol. 67, No. 4 (AUTUMN 1998), pp. 113-123
The Phi Beta Kappa Society 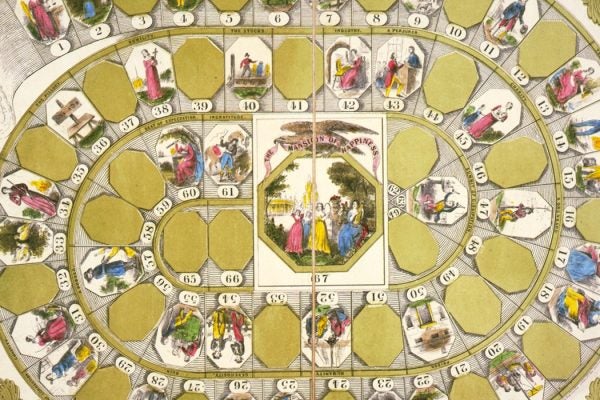