Plant of the Month: Robusta Coffee

What’s there to love about “bad” coffee? For much of the world, plenty. 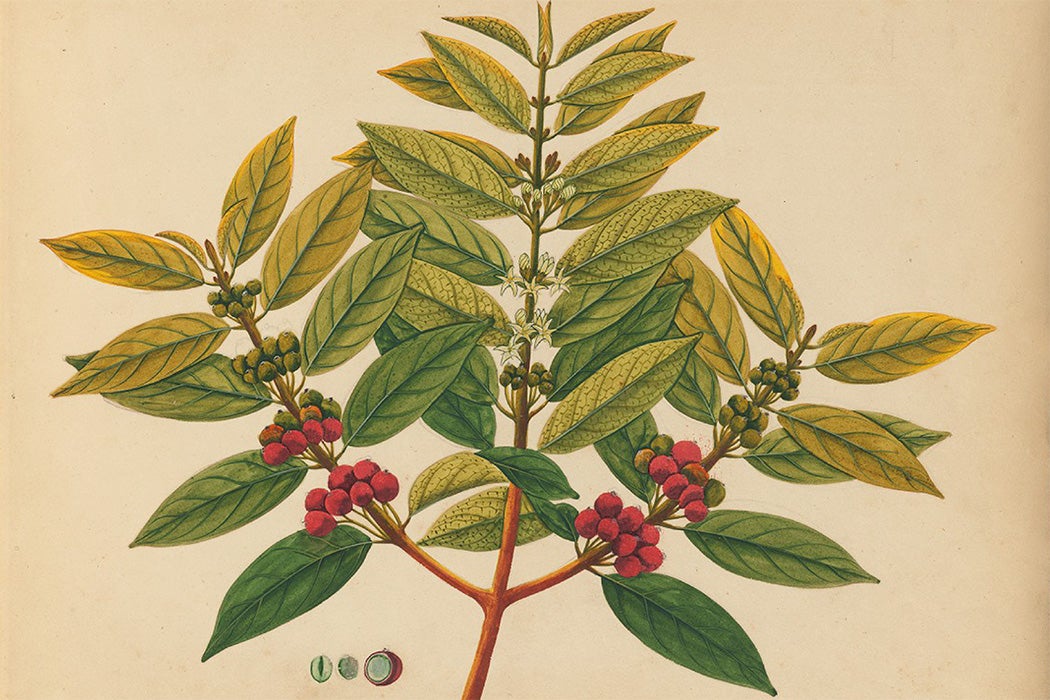 When whipped instant coffee, or dalgona coffee, was TikTok’s biggest trend last year, much of the American old-guard media was aghast. As the Wall Street Journal wrote with snark of the Korean-inspired drink, “Long reviled by coffee snobs, instant coffee is having its moment. There’s just one issue: People are spending an awful lot of time trying to make it taste good.” According to one coffee aficionado, “the classic whipped coffee variation has some weak spots that coffee lovers can readily identify, namely that it uses instant coffee. Not for me…Sorry!”

If these passages tell us anything, it’s that whipped instant coffee may have taken sourdough’s crown as the most controversial food trend of the COVID-19 pandemic. But what really is instant coffee, and why is it so reviled by American coffee snobs—and what is the longer history of the plant behind the breakout social media star?

Before diving into the history of the instant coffee plant, it is critical to probe the longer history of traditional coffee plants. Most coffee—about 60 percent of total production, according to the Food and Agriculture Organization of the United Nations—consumed today is arabica coffee. It was first grown in Arabia between 500 and 900 CE, and was woven deeply into in Islamic history and culture.

Flash-forward almost a millennium, though, and coffee arabica had become indelibly associated with European imperialism: European colonizers planted the crop from Angola to India, South Africa to Ceylon, in order to garner profit and feed England’s insatiable appetite for caffeine. This European obsession with coffee can be seen in the Dumbarton Oaks Rare Books Library, which contains collections of botanical engravings documenting coffee specimens throughout the world. Moreover, nineteenth-century travelogues held by Dumbarton Oaks document the cultivation of coffee in British India, which was thought to be highly profitable—one promised “the English capitalist…large and rapid profits.” As historian Steven Topik bluntly puts it, “Coffee cultivation and trading have motivated empires…and provoked revolutions.”

Coffea arabica filled the coffers of European imperialists. According to coffee historian Stuart McCook, this species was used throughout the world because it is “self-fertile (autogamous), meaning that only one parent plant is necessary to flower and produce seeds,” whereas other species require two parents. This unique genetic makeup “made it suitable for transplant over great distances,” and led to a uniform, commercially attractive crop.

In the nineteenth century, however, this homogeneity proved detrimental: a leaf fungus, called the coffee leaf rust, or, colloquially, “Devastating Emily,” struck arabica plants throughout the world. The entire industry in Ceylon was decimated, and the rust “reached virtually every corner of Asia and the western Pacific,” writes McCook. It was an epoch filled with “arabica graveyards.”

Enter robusta coffee. The plant, notes McCook, had been “naturalized by some African peoples long before European colonialism.” During the age of empire, European naturalists collected the plant and experimented on it at coffee research centers throughout the Dutch East Indies. These naturalists, upon planting the crop in Java in the 1900s, thought they had hit the jackpot: the plant was geographically agnostic, in that it could be planted at low or high altitudes. And, crucially, it was much easier to process than other species of coffee. As such, it quickly became an inexpensive fill-in for arabica. Coffee growers in places like Vietnam, India, and Brazil quickly began cultivating the bean.

Concomitant with the development of robusta coffee was the development of freeze-drying technologies. Topik details how a North American chemist living in Guatemala made the “first commercially successful dried coffee” in 1906. But according to sociologist John M. Talbot, production of instant coffee only began on a large scale as “Nestlé technicians, in consultation with Brazilian coffee officials trying to find ways to dispose of their huge coffee stockpiles, realized that the spray-drying technology being used to produce powdered milk could be adapted to make powdered instant coffee.”

While the method was meant to be used for Brazilian surpluses of coffee, it quickly took off in the West, particularly after World War II decimated European economies. By 1952, instant coffee accounted for 17 percent of US coffee consumption. And, given its low price and relative ease of processing, robusta quickly became the bean of choice for this dried concoction. Soon, instant coffee became a potion of freeze-dried robusta grounds and coffee bean oil, which has been known to introduce rancidity to the brew.

However, even as instant coffee skyrocketed in popularity, some American consumers began to criticize the drink. One Brooklyn-based coffee shop owner notes, “I was born in 1945, and none of my buddies drank coffee.” They instead opted for “coke…and a cigarette in the morning because coffee tasted terrible.” Such criticism increased in the 1980s, as the “gourmet” coffee industry took hold in America. Freeze-dried robusta was spurned for its less complex taste, as consumers turned to fresh-brewed cups of joe and hip cafes. As Starbucks cofounder Jerry Baldwin wrote in 2009, “For decades no debate existed among specialty roasters. All good coffees were arabica…Robusta was bad.”

And yet, even as this view predominated in the United States, such a simple understanding of coffee did not hold up elsewhere. Indeed, as Time magazine reported in 2014, “For coffee-loving Westerners…it may come as a shock that the other half of the world prefers what Americans can barely fathom: instant coffee.” This robusta brew is favored in the Global South (and in certain tea-drinking societies, like the United Kingdom) for a few reasons. First of all, the bean produces what one outlet describes as a “strong, slightly bitter coffee that is well-liked in Asia and growing popular in Brazil.” Second, the bean also can be produced easily and cheaply for domestic consumption in places like Vietnam and Indonesia, given the fact that it can be cultivated at lower altitudes than arabica. Third, as Talbot has shown, “instant coffee seems to be the most acceptable coffee product in traditional tea-drinking countries” like the United Kingdom, Canada, and Japan. Whether robusta coffee is understood as “quality” is in the eye (or rather on the palate) of the beholder.

So, did TikTok make instant coffee cool again? The answer, it seems, is a resounding “no”—since the robusta brew was never uncool in the majority of the world. Rather, as anthropologist Sarah Besky has argued in her recent book on tea, “quality is never sitting in one place or lodged in a discrete set of attributes,” but rather is “actively composed, often by divergent means.” The definition of robusta coffee as “bad” and arabica coffee as “good” in much of the West is the outcome of a variety of historical processes, cultural understandings, and scientific transformations. The Plant Humanities Initiative seeks to highlight not only how plants were bred, transported, and cultivated, but also the historically specific ways they were imbued with different qualities by consumers worldwide.

Editor’s note: This article originally stated that arabica coffee accounted for “over 70 percent” of the world’s coffee consumption. The text has been updated.