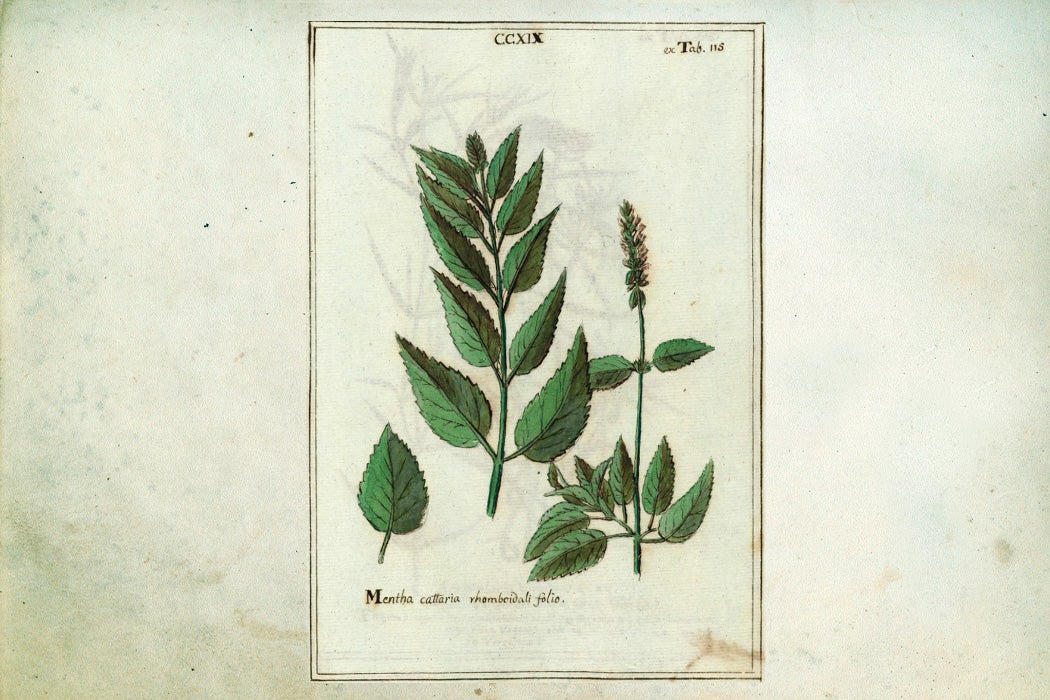 Mint goes hand in hand with the feeling of a clean mouth. From toothpaste to mouthwash to chewing gum, the flavor of mint has become synonymous with oral hygiene. This use, though, is not a recent phenomenon. As far back as the early 1620s, physicians recommended rinsing the mouth with mint boiled in white wine and some vinegar, along with rubbing the gums with dry mint powder, as “a good lotion for the teeth and mouth[,] and rottennesse of the gummes.”

Fast-forward 400 years, and this appreciation of the use of mint in our daily lives continues, so much so that in 2018 the United States produced enough peppermint oil to fill an Olympic-sized swimming pool—5.38 million pounds. Primarily cultivated in California, Idaho, Indiana, Oregon, Washington, and Wisconsin, peppermint crops contribute approximately $100 million to the U.S. export trade.

One of the oldest surviving medical texts in the world from 1550 BC, cites mint as a digestive and a tool to soothe flatulence.

Ongoing scientific research looks to further capitalize on peppermint acreage in the United States, in part due to “increasing market pressure for lower-cost mint oils,” according to a recent study. While agricultural improvements have slowly increased mint-oil yield from existing crops, the authors show that metabolic engineering is one of the most “realistic short-term alternatives for enhancing peppermint oil yield and composition.”

While the market value of mint might not match that of tobacco or cacao, commercial mint-oil products have become part of our daily lives, including not only toothpaste but also chocolate, pharmaceuticals, tobacco, and fragrances. Clearly, our fascination with mint goes beyond oral health. From the fields of ancient Egypt to the present-day American Pacific Northwest, mint has a long history of use for a broad range of purposes that involve the entire plant, not just its oil.

For example, one of the oldest surviving medical texts in the world, the ancient Egyptian Ebers Papyrus from 1550 BC, cites mint as a digestive and a tool to soothe flatulence. In ancient Greece and Rome, the sweet smell of mint was used in funerary rites and to scent the body. Pliny the Elder believed that when applied to the temples in the form of a broth, mint could get rid of a headache. Greek physicians such as Galen and Dioscorides taught that mint kept people from vomiting blood and speculated that it could prevent women from becoming pregnant.

In early modern Europe, the entire mint plant was considered useful. Dietaries from the late 1500s suggest that mint juice was effective against poison, and the mint herb encouraged circulation of good blood if eaten raw. The powder of mint was thought to aid in killing worms in the stomach, and when mixed with milk could be used for this purpose even with infants.

Some believed that mint had even greater virtues: The physician Tobias Venner wrote in 1620 that the excellent fragrant smell of both red garden mint and spearmint “doth greatly comfort the braine and spirits, stirre up the senses, especially the memorie, and make the heart cheerefull.” He even touted mint as something of the original study drug, advising that those who “leade a studious kinde of life” should regularly take time to enjoy the smell of mint.

Early modern herbals—published texts that listed and described plants in terms of their medicinal uses—also highlighted the therapeutic value of mint. A seventeenth-century herbal by English astrologer and apothecary Nicholas Culpepper, housed in the Rare Book Collection at Dumbarton Oaks, claims the mint plant could be used to treat over forty different ailments. Another Dumbarton Oaks volume, the 1597 Generall historie of plantes by John Gerard, claims that mint was “a marvellous wholesome for the stomach.” The same kinds of mint leaves that Culpepper and Gerard endorsed are still popular today in digestive and medicinal teas, suggesting that looking to the past lives of plants can help us to trace the lineage of how we use them today.

Mint started becoming big business in the 1700s. Advertisements for mint oil indicate that the original American colonies were importing the product from Britain, often for medicinal recipes. Eventually, farmers in New York and New Jersey realized they could grow mint themselves, especially peppermint and spearmint, which are easily cultivated in moist conditions. Mint became an established market in North America from the nineteenth century onward. Despite the soil-borne virus Verticillium dahlia, which forced mint-oil production to move from the Midwest to the Pacific Northwest in the 1920s, commercial mint production kept on climbing.

While today we might associate fresh minty flavor with oral hygiene, a look to the history of mint shows how a plant can hold a much more permanent place in our lives. We’ve used mint for thousands of years—the whole plant, not just the oil, and for much more than cleaning our teeth. We want mint to cleanse every part of the body: our mouths, stomachs, skin, even “refreshing the Brain, and comforting the Heart,” as one author wrote in 1683. Modern-day scientific methods continue to find new ways of successfully extracting oil from mint, trading on the assumed healing power of this ubiquitous plant.

Unearthing the history of mint reveals that our desire for a fresh breath is part of a centuries-old preoccupation with cleanliness as a sign of health. By shining a spotlight on plants and their agency, the Plant Humanities Initiative aims to recover forgotten histories, helping to explain why a plant like mint occupies such an ever-present role in our daily lives.