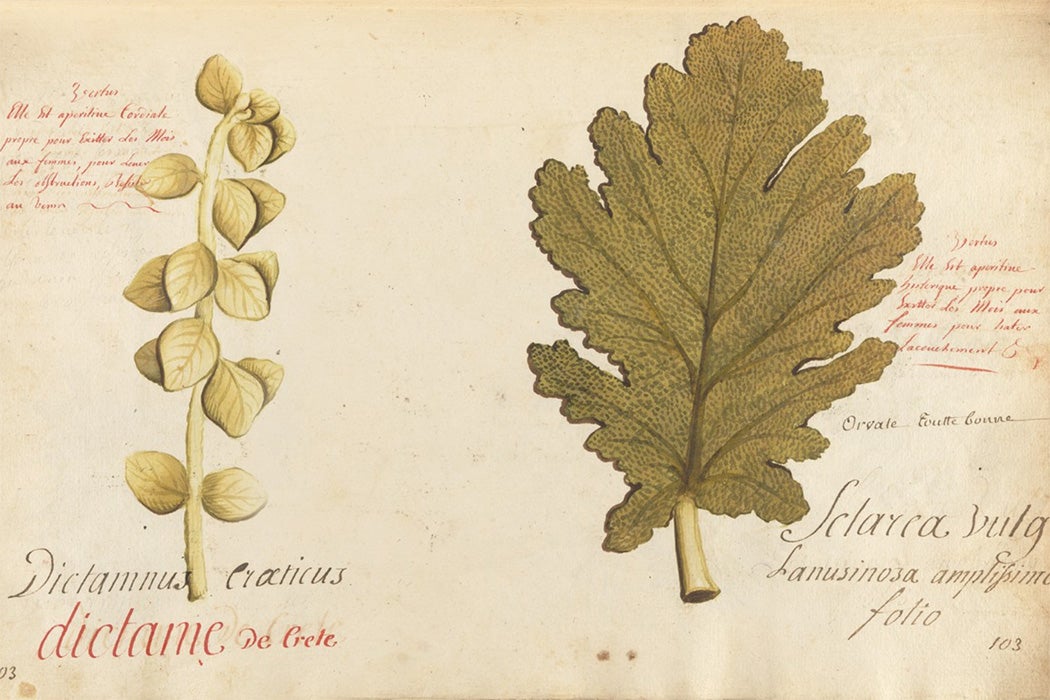 It is easy to assume that women today have greater reproductive agency than women of the premodern world did. But in many contexts our foremothers actually did seek to exercise agency over their bodies and others’ through their knowledge and use of medicinal herbs. Perhaps, then, it is not such a stretch to think that they had reproductive options, too.

While for most of history women did not have embryology, ultrasounds, and contraceptive pills, it isn’t the case that they had no knowledge of or interest in birth control options. In the early 1990s, historian John M. Riddle argued that in the ancient world and well into the early modern period, most European women had even greater reproductive freedom than we do today. For much of western history, women’s agency over reproduction was predicated on knowledge of medicinal herbs like dittany.

Almost all early modern European herbals associated dittany with women’s health and identified it as an effective emmenagogue.

For more than 2,000 years, dittany was used as an emmenagogue: a substance to provoke menstruation. In ancient, medieval, and early modern European medicine, regular menstruation was viewed as essential to a woman’s health. Male physicians offered numerous theories and explanations as to why women menstruated; however, all agreed that missed or delayed periods signaled an imbalance or corruption of the humors. Menstruation was viewed akin to a purge, either as a means to purify the female body or to expel excess blood—and unexpelled menstrual fluid was deemed harmful. Thus, when a woman suffered from delayed menstruation, she turned to known emmenagogic herbs to induce bleeding and return her to health.

Almost all early modern European herbals associated dittany with women’s health and identified it as an effective emmenagogue. The most famous of these herbals, Pietro Andrea Mattioli’s commentary on Dioscorides, explained that the truest and most potent dittany was found only on the isle of Crete, although two additional varieties with similar virtues were readily available throughout Europe. Of its many uses, this herb was most effective for women’s reproductive health, quickening childbirth and easing the pain of labor. Another sixteenth-century herbal, by English botanist John Gerard, stated that dittany of Crete, whether taken in a drink or used in a pessary (vaginal suppository), “bringeth away dead children; it procureth the monethly termes [menstruation], and driveth foorth the secondine or the afterbirth.” Both herbals are held in the Dumbarton Oaks Rare Book Collection.

As is the case today, delayed or missed menstruation in the early modern world could have been caused by any number of health and environmental factors. Pregnancy, however, was and remains a leading cause. Therefore, argued Riddle, emmenagogues were not only used to restore women’s health but were also employed as a means to prevent or terminate unwanted pregnancies. Early modern printed medical books routinely caution women from using emmenagogic herbs while pregnant. For example, a popular 1684 English sex and midwifery manual, Aristotle’s Masterpiece, instructed women on the precautions to take after they think they have conceived: “Let her abstain from all things which may provoke either urine or the courses [menstruation]…” While intended to help women safeguard a desired pregnancy, this passage also clearly associates inducing menstruation with terminating a pregnancy.

As many historians of science and medicine have concluded, the use of herbs to “draw the menses down” or “provoke menstruation” was rather well-known and commonplace among women. For example, a popular sixteenth century Roman herbal, also held in Dumbarton Oaks’s Rare Book Collection, lists 160 plants capable of provoking menstruation, including three types of dittany. Elite European women in the early modern world would have read printed vernacular medical books such as herbals and collected medicinal recipes, since they were expected to have general medical knowledge in order to fulfill their Christian duties as wives, mothers, and caregivers, both within the home and the community. These women were well versed in the uses of herbs like dittany. Historians postulate that women of lower social classes would have known of the medicinal uses of herbs through the oral tradition that paralleled the written sources and was subsequently largely lost with the professionalization of medicine and the increasing religious and legal restrictions on women’s reproduction.

There is evidence, therefore, that early modern European women sought to control menstruation and fertility through herbs. Moreover, historians argue that these practices were socially acceptable and legally permissible due to early modern definitions of pregnancy and abortion that differ from our own. Unlike contemporary science, premodern theories of conception did not distinguish between an embryo and a fetus. Early modern sources also didn’t assign full personhood to a fetus. Furthermore, a woman in the early modern world was not pregnant until she declared it. Without our contemporary tests and ultrasounds, detecting pregnancy within the first few months was difficult, and, thus, left up to the mother. Prior to the professionalization of obstetrics, it was women, not male physicians, who determined when a fetus became viable. The quickening—when a pregnant woman began to feel or perceive fetal movements, usually between fifteen to seventeen weeks (three to four months)—was the most important confirmation of a viable pregnancy and often when women announced it.

This window of time, coupled with the prevalence of emmenagogic herbs in early modern herbals and vernacular medical books, gave premodern women agency over their bodies. If pregnancy was unwanted, women could turn to a herb like dittany to try to provoke menstruation.

But did dittany actually work? There is no scientific evidence of its efficacy as an early-term abortifacient, although there is some evidence that other herbs, such as pennyroyal (with which dittany was often compared) may have that effect. Contemporary research on pennyroyal’s key active compound, pulegone, has revealed that the plant’s essential oil does have the potential to produce significant effects on the female reproductive system. But there is some danger involved: Pulegone also makes pennyroyal toxic, and plants in different regions and climates produce varying amounts of it, making proper dosage difficult.

While we have no conclusive evidence on the risks or efficacy of dittany as a form of premodern birth control, we infer from the sources that European women could access this herb and that the prevailing medical literature regarded dittany as an antifertility agent, since controlling menstruation also controlled fertility. Both the historical record and contemporary scientific research support the conclusion that premodern women in the West sought to exercise agency over reproduction, especially in the early stages of pregnancy or before quickening, and that medicinal herbs were central to this endeavor.

Such efforts became increasingly contested and restricted in the course of the nineteenth century. By the mid-1800s in the United States, the American Medical Association had begun pushing to criminalize abortions, while, in 1869, the Catholic church officially prohibited early abortion by canon law.

Fast forward to today, and the reproductive rights of women remain at the center of political discourse in the United States. By investigating the history of herbal emmenagogues and abortifacients, the Plant Humanities Initiative reminds us that women have long sought reproductive agency and illuminates how plants have played a critical role in that story.

Oral Contraceptives and Early-Term Abortifacients during Classical Antiquity and the Middle Ages
By: John M. Riddle
Past & Present, No. 132 (Aug., 1991), pp. 3-32
Oxford University Press on behalf of The Past and Present Society
'Herbals she peruseth': reading medicine in early modern England
By: Elaine Leong
Renaissance Studies, Vol. 28, No. 4, WOMEN AND HEALTHCARE IN EARLY MODERN EUROPE (SEPTEMBER 2014), pp. 556-578
Wiley
Persephone's Seeds: Abortifacients and Contraceptives in Ancient Greek Medicine and Their Recent Scientific Appraisal
By: Sarah E. Nelson
Pharmacy in History, Vol. 51, No. 2 (2009), pp. 57-69
American Institute of the History of Pharmacy