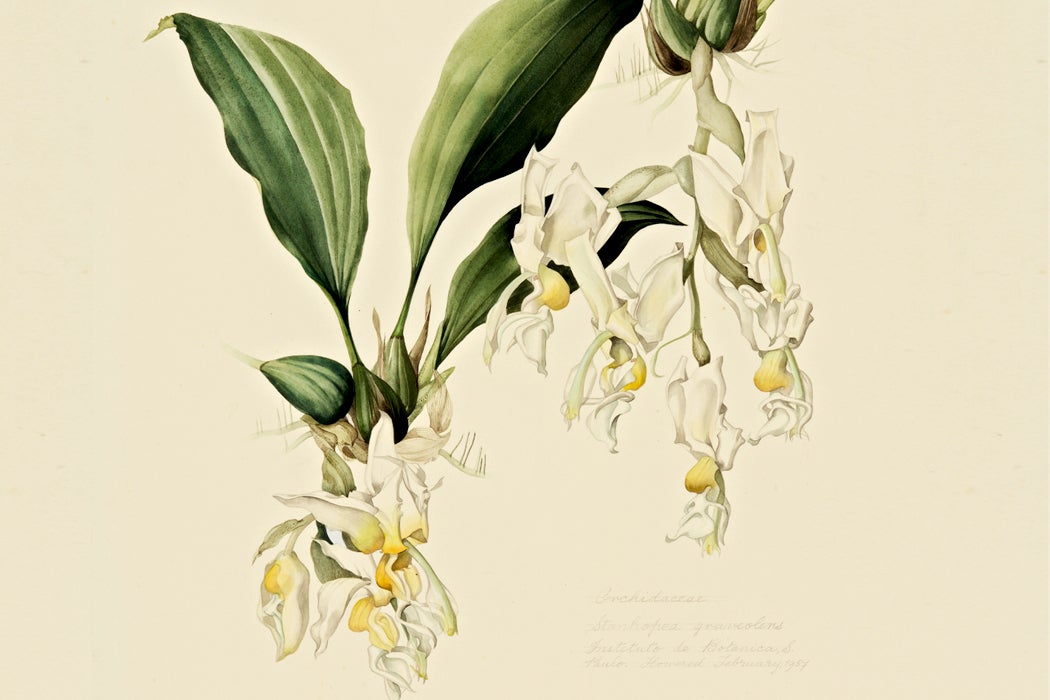 In January 1956, the British artist, explorer, and environmentalist Margaret Mee (1909–1988) undertook a dangerous journey deep into the Amazon. Her goal was to document rare Amazonian plants in their natural habitats. This trip would be the first of many for Mee, who carried out a total of fifteen expeditions between 1956 and 1988. Her 1957 orchid painting of Stanhopea graveolens in the Dumbarton Oaks Rare Book Collection is just one example of the many rare and beautiful plant portraits Mee painted.

But just as orchids often do, Mee’s elegant painting carries an air of mystery. Does the painting really depict the Stanhopea graveolens species? And how did orchids like this transform from rare flowers—accessible only after journeying over a thousand miles through inhospitable environments—into popular houseplants you can purchase at your local supermarket?

Most epiphytic orchids, like the Stanhopea, grow in tropical or subtropical environments. While Europeans were familiar with terrestrial orchids native to their temperate climates, in the nineteenth century they became obsessed with the larger, brighter, and rarer orchids from the tropics. As European colonialism expanded, more and more captivating orchids emerged from South America and Southeast Asia.

Orchid fever began in the early 1800s, quickly infecting the British elite. It allegedly started when English explorer and naturalist William John Swainson used what he thought were worthless weeds as packing material to ship exotic tropical plants from Brazil to England. When the shipment arrived, however, Swainson’s weeds had bloomed into bright purple flowers. He had unknowingly packed his shipment in epiphytic orchids (in particular Cattleya labiate), which do not require soil to grow and are found only in tropical climates. This seemingly magical and brightly colored plant immediately enthralled those who saw it. While there are many versions of this story, we do know that an orchid specimen later named Cattleya labiate was sent by Swainson to William Cattley, a British trader and orchid enthusiast, sometime after Swainson returned from Brazil.

As Orchidelirium—orchid mania—swept Victorian England, growing demand for rare and showy orchids created a class of professional orchid hunters who scoured the tropics for new orchids to feed an expanding cultural obsession. Unlike Mee, however, these orchid hunters were concerned less about documenting natural habitats and more about extracting plants for their wealthy patrons. One of the most successful plant hunters, Benedict Roezl, explored extensively in South America and is said to have encountered eight hundred species of plants (including numerous orchids) never seen outside the New World.

The Stanhopea graveolens named in Mee’s painting was first introduced to Europe in the pages of Edwards’s Botanical Register in 1840. The illustrated horticultural magazine ran from 1815 to 1847, during the height of the orchid craze. John Lindley, editor of the magazine and a prominent English botanist and orchidologist, learned of the plant from fellow orchid collector and enthusiast William Herbert, who had imported Stanhopea from Peru. “Its odor is so powerful,” Lindley wrote, that it “is offensive from its intensity.”

But did Mee really paint Stanhopea graveolens in 1950s Brazil? To answer that question, you have to jump back even further in time.

Over the past 50 million to 100 million years of their existence, orchids have evolved to display astounding variability. The plants employ complex pollination strategies—from enticing shapes to vivid colors to strong odors, in the case of Stanhopea graveolens—to attract specific pollinators, including humans. Today, the Orchidaceae family is the second largest family of flowering plants, found on every continent except Antarctica and with incredible diversity of color, shape, size, and scent.

In the nineteenth century, botanists and collectors like Lindley and Herbert classified the new orchids they collected and cultivated in their greenhouses, often from single specimens and always removed from their natural habitats. Naming and classifying orchids in this way was problematic and created great confusion, as it could not account for genera of orchids with great variability, like Stanhopea.

Confusion over orchid nomenclature and classification continued well into the twentieth century. The Stanhopea genus was in “a state of taxonomic chaos” around the time that Mee was painting. According to orchidologist Calaway Dodson, after naming the orchid growing in Herbert’s greenhouse, Lindley never saw another living specimen of Stanhopea graveolens. Instead, he referred to an illustration of a Brazilian plant that also mentioned a powerful odor, and this connection led a similar species in Brazil to be labeled Stanhopea graveolens, too.

So how did Stanhopea make its way from the depths of the Amazon to your supermarket? No longer a luxury commodity for the elite, orchids are now some of the most common houseplants in the United States. Following the Industrial Revolution, domestic heating and glass production turned our homes into de facto greenhouses. Coupled with advances in botanical knowledge that allow for the mass cultivation and affordability of orchids, even growing them in test tubes, the American home is now tropical-plant friendly.

One reason for our continuing love affair with orchids—quite apart from their beauty and allure—may be that, as scientific studies have indicated, contact with nature offers a range of health benefits. While we cannot all explore deep into the Amazon, we can invite nature into our homes through houseplants—or online exhibits. Dumbarton Oaks’ current online exhibit, Margaret Mee: Portraits of Plants, presents twenty of Mee’s stunning paintings of Amazonian flora. As part of the larger Plant Humanities Initiative, the exhibition also draws on manuscript and printed works from Dumbarton Oaks’ Rare Books Collection to reveal the scientific and artistic contributions of women botanical artists, like Mee, stretching from the seventeenth century to the present day.