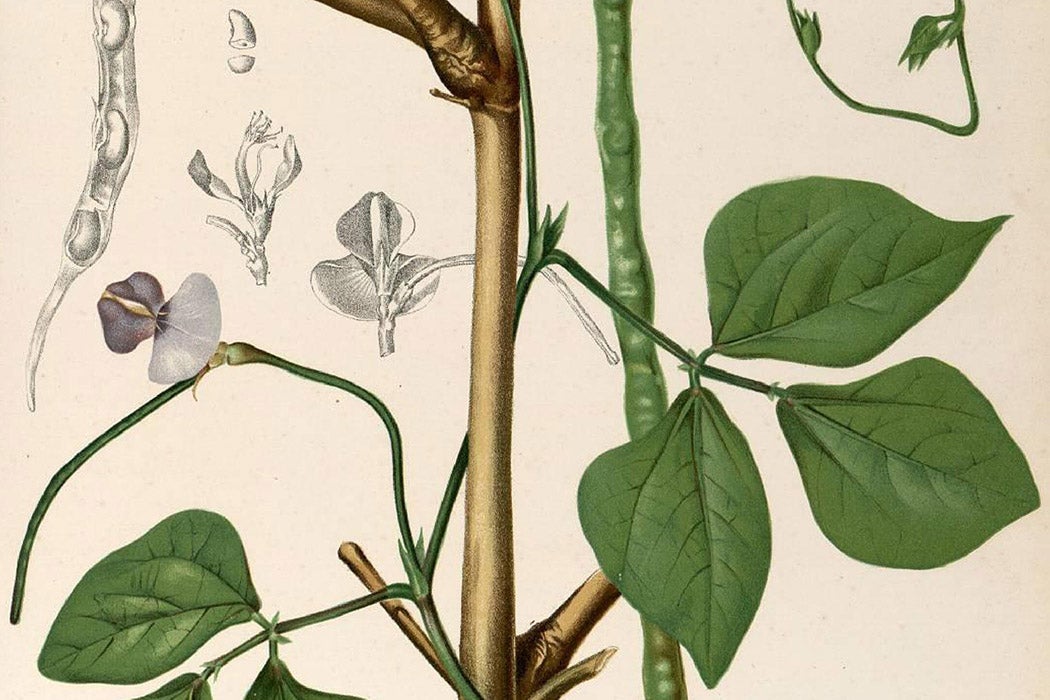 Black-eyed peas have been getting a lot of good press. Recent research from the University of California, Riverside has demonstrated that planting black-eyed peas, a crop that attracts nitrogen-fixing bacteria, can alleviate the need for fertilizers—an increasingly important function in view of the growing fertilizer crisis and its environmental impact. Others note the legume’s ability to withstand high temperatures and intense droughts brought on by the looming climate crisis.

The black-eyed pea’s rise to media darling status is no doubt a positive thing, as its cultivation can promote food security and economic stability. But, as agroecologist Liz Carlisle reminds us, for many people, this understanding of the black-eyed pea is anything but new; as she notes in a recent book, “carefully tended in the gardens of the enslaved and the murals of the landless,” traditions like black-eyed pea cultivation and consumption “provided both material subsistence and another form of sustenance that was difficult to put into words.” Recognizing the violence—and resilience—that have shaped human relationships to the crop is vital in order to understand our current ecological and cultural predicament, as well as potential paths forward.

West Africans (most likely in what is now northeastern Nigeria and northern Cameroon) domesticated relatives of the plants more than 6,000 years ago.

While the black-eyed pea is deeply ingrained in cultures of the US South, the crop is not native to the Americas. Rather, West Africans (most likely in what is now northeastern Nigeria and northern Cameroon) domesticated relatives of the plants more than 6,000 years ago. As the Plant Humanities Lab at Dumbarton Oaks notes, the crop became central to mixed food systems combining wild gathering, hunting, fishing, and crop cultivation among other activities. Crop diversity “protect[s] the community by relying on different foods at different times of the year and ensuring no single crop failure will cause a famine.”

Crucial to communities’ land management and food security, black-eyed peas were revered in many African cultures. As food historian Michael Twitty details, “Black eyed pea in Yoruba is ewa. Change the tone and it’s the word for beauty and the word for tradition.  To ingest black eyed peas is to become filled with beauty, and ancestral tradition.” He also notes that the crop is a “symbol of multiple deities and spiritual force in West Africa,” and a fertility symbol.

By 1500 BCE, the crop had spread beyond West Africa into the Mediterranean, South Asia, and Central Asia, among other regions. While cultures within West Africa held the crop in high regard, it acquired different cultural associations in other contexts. In Europe, for instance, the legume became a “cultural marker of those who lacked social status” by the early modern period. Food historian Ken Albala, in his book Eating Right in the Renaissance, notes that beans were “singled out as appropriate only for rustics and laborers.” Annibale Carracci, in his late 16th-century painting The Bean Eater, uses a rough-hewn style to cast the subject’s meal of black-eyed peas as unrefined. This style, as Sarah Mallory, Emily Kamm, Haley Price, and Christina Hourigan argue on the Plant Humanities Lab, “suggests the man and his food are unruly parts of late sixteenth-century Italy’s deeply hierarchical and classist society.”

The lowly connotations of the crop accompanied European colonizers to the Americas, where they used black-eyed peas to feed enslaved peoples and livestock. Scholars have shown how black-eyed peas were an important part of rations for the enslaved. In their recent book, Judith Carney and Richard Rosomoff chronicle how in the mid-eighteenth century, enslaver John Newton “loaded his ship with cowpeas and nearly eight tons of rice for the 200 slaves he carried across the middle passage.” And, as food writer Adrian Miller argues, no other bean “surpassed the black-eyed pea’s reputation for feeding slaves and animals.”

While black-eyed peas were closely associated with the violence of enslavement and colonization, they also represented a thread of continuity for many enslaved communities. Twitty writes powerfully of this: “Before we were exiled, they were fritters and puddings. They were wedding foods symbolic of goddesses of fertility. They were charitable food shared with the poor. They were a symbol of the unclosing eyes of the Creator and Ancestors… The search for their meaning has, in many ways, been a search for the missing pieces of myself.” And, the legume was not only carried by European colonizers: enslaved peoples also transported the crops themselves in order to ensure this continuity and subsistence. Carney and Rosomoff demonstrate that the introduction of the cowpea to Jamaica can be “directly attributed to African slaves.” Oral traditions, “whispered on pages said that seeds were brought in the hair of our Ancestors during the Middle Passage,” reaffirmed this knowledge.

For Black communities across North America, the crop became central to a “transnational myth of resilience.” Food staples like the black-eyed pea enabled enslaved peoples to create a “subaltern food system” for their own subsistence in the Americas. Carney and Rosomoff detail how African practices of intercropping black-eyed peas with cereal like sorghum, which effectively work to increase food yields through attracting pollinators and fixing nitrogen, “was also observed in the Carolina colony” and Jamaica, “​​the crucial, but often overlooked, linkage of food sovereignty to enactments of political and economic freedom.”

Perhaps because of the significance of these alternative subsistence food systems, the black-eyed pea took on new mythology in this context. Twitty recounts the “scripture” of eating a “mess of black-eyed peas…alongside greens as a good-luck food at the start of the civil year.” He recalls that every New Year’s Day, his mother made a tiny pot of black-eyed peas, despite not liking them. When he commented that this was a long and beleaguered process just to make something she doesn’t like, his mother posed a critical, if not rhetorical question: “How else am I supposed to get good luck and change?” For his mom and many other Black Americans, this is a critical tradition to beckon in New Year prosperity. While the origins of this tradition are debated, this practice reveals the centrality of the legume in Black American culture. As Twitty writes, “Our peas were tiny little texts, and we didn’t even know it…Each pot was a bit of our own immortality going back millennia.”

Embedded within this “tiny little text” of culinary tradition was also the role the legume played in Black food sovereignty. Monica White, in her recent award-winning book, discusses George Washington Carver’s “ecological framework for understanding the relationship of humanity to soil.” As she notes, earlier scholarship focused on Carver’s work as a scientist “without considering the larger purposes his science served” as a “strategy of food and feed security.” Black-eyed peas played an important role in this strategy. While most farmers in Alabama in the late nineteenth century began to employ commercial fertilizers, Carver championed instead the cultivation of cover crops like black-eyed peas (as well as peanuts) because they could similarly help replenish soil nutrients without high costs to farmers. He argued that the black-eyed pea “is rightfully looked upon, by many, as the poor man’s bank or mortgage lifter… It is a matter of much regret that every colored farmer in Macon County does not plant at least three acres in peas.” Carver, as White suggests, propounded what would become the basis of organic farming and sustainable agriculture—a legacy which, many scholars argue,  is often erased and sanitized.

Today, black-eyed peas are considered by botanists a “vital but under-utilized resource.” But this narrative of plants as a “resource” to “capitalize on” effectively serves to elide “the history of wild relatives, and the ingenuity of farmers—both past and present—in continually recycling and recombining ancestral traits into the seeds of edible plants,” to draw on the language of environmental studies scholar Maywa Montenegro.

It is critical instead, Carlisle argues, to recognize how “the seeds of climate catastrophe were planted in this broken ground” of colonial violence and economic exploitation: “only a full reckoning with that history could offer any hope of getting our planet back in balance.” The Plant Humanities Initiative at Dumbarton Oaks aims to contribute to this reckoning by recognizing the deep roots of sustainable agriculture helmed by communities of color across the United States, as well as the violent roots of the climate crisis. 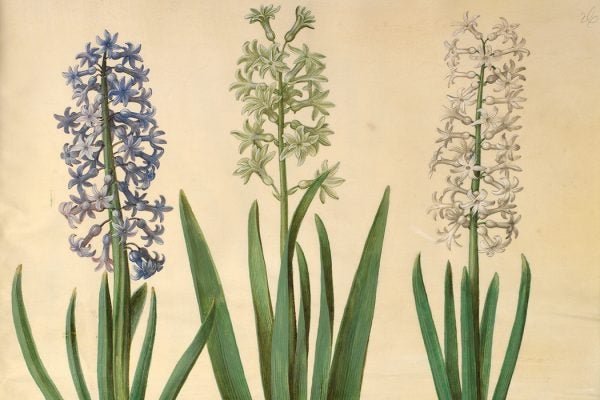 Plant of the Month: Hyacinth

A 2021 shortage of hyacinth bulbs brings to mind the long and storied history of its botanical and economic import.