On Text and Textile with Artist Dianna Frid 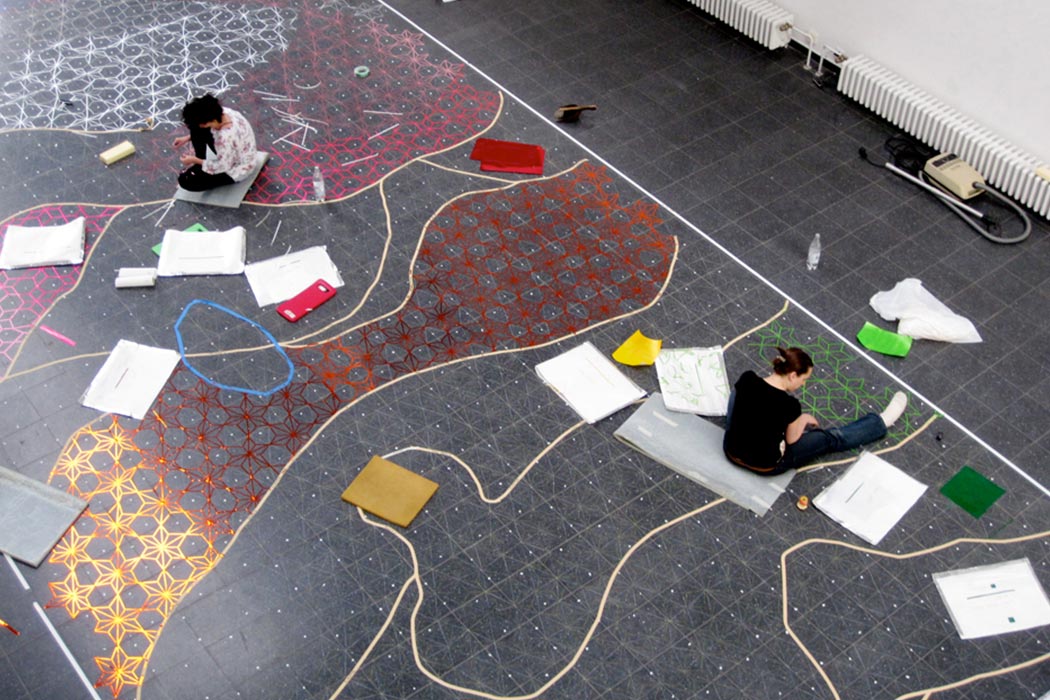 Mexican-Canadian artist Dianna Frid is deeply interested in meaning, context, language, and material. Her works, ranging from drawings and paintings to sculptures, installations, and artist books, explore the ways physical forms shape how we conceive of reality. Frid has received major awards from the Canada Council of the Arts and the Artadia Foundation, and her work has been exhibited nationally and internationally at institutions including MoMA PS1, BravinLee Programs, and the Drawing Center (New York), the Museum of Contemporary Art (Chicago), and the Neues Kunstforum in Cologne, Germany. Her work is also housed in public collections at the Art Institute of Chicago and the Cleveland Clinic. Frid was born in Mexico City and migrated to Canada with her family when she was a teenager. She currently lives in Chicago where she is Associate Professor in the School of Art and Art History at the University of Illinois at Chicago. I met her in the studio recently to learn more about her practice.

Lee Ann Norman: Maybe we can start with a little bit of background information  . . .

Dianna Frid: Yes. I was born in Mexico City and my family moved to Vancouver, British Columbia in Canada when I was 15, so I’ve spent most of my life in the English speaking world even though Spanish is my first language. My parents wanted to immigrate, and it takes a long time to complete that process. They started the process when I was about 10, and it was complete by the time I was 15, but you know, when you are a teenager, you are a completely different person than a 10-year-old (laughter). Even though it was a challenge culturally [when we got to Vancouver], I was really struck by the enormous beauty of the northwest; the British Columbia seashore is extraordinary…My trajectory has brought me to live and work in Mexico again (I was in Oaxaca in Southwestern Mexico for awhile), but for the most part, I’ve been living in the Untied States, and Chicago has been the place that I’ve lived in the longest.

Were you a sculpture major in college?

I was an anthropology major, and I started to study sculpture at the School of the Art Institute when I transferred, but I studied everything (laughter), but sculpture is probably the area I studied [formally] the least.

So how did you come to sewing and working with fabrics?

My mother recently reminded me that when I was a kid, I used to love to go the National Museum of Anthropology in Mexico City. All the great collections of the pre-modern cultures are on the ground floor, but there’s an upstairs section where the textiles and costumes are displayed. Europeans brought a diversity of materials (like lace) and styles [when they conquered Mexico], so the indigenous populations, who had a sophisticated use of textiles, began to integrate those materials into related garments. Within both pre-conquest and post-conquest garments are codes that provide information about where the village is (or was), for example. You see it beautifully in Mayan textiles. Even as a kid, I intuited that those works contained codes. I loved to go up there and touch the garments (laughter), not to vandalize, but more to experience and feel! As an undergraduate, I did start with painting, but I started to cut things up and sew them together to reconfigure. It was more like an additive process, which has continued.

So how does that relate to the works you are making now?

I think my work is heterodox in how it’s made, so it’s not just one thing. I am concerned with how something comes together both materially and thematically, how that material and reality comes together to become a vessel for ideas and meanings. I know this sounds a little obscure, but the clearest way for me to work through those ideas is exploring the relationship between text and textile. Text is not necessarily linguistic, even though we think of text as words—I want to think of text as filled with signs that sometimes consist of something other than graphemes, words or language.

But you don’t just work with fabric, right? How do the other forms come into your practice?

I also make sculptures that have no systemic language and I’ve done architectural and site-specific installations either directly on the floor or the wall. I think that all of those things are not in binary opposition to things that can be perceived as legible. And of course there is a conversation about craft. I think one of the reasons I am not comfortable with labeling my work “textile art” is because I feel it leaves out all of the other things that I do and the conversations I have with other artists, but there is truth to the commitment to a lineage [of craft persons] that, hierarchically, is seen as inferior. If someone calls this work feminine [because I work in textiles], I want it to be complicated. What do we mean by that? There are differences between fine and applied arts, but craft is still integral to both.

You have an exhibition at the DePaul University Art Museum that integrates contemporary work with historical work, and that’s an idea you’ve worked with before, right?

About 6 months ago, I had an exhibition in a rare books library in the city of Oaxaca. I was invited to research their holdings over a year and make artist books in response. The way that exhibition came about is a friend who knows my work really well, and also knew the library, suggested that it might be a really interesting project to show contemporary work in the context of an historical site. I intuited that it would be fascinating, but I didn’t know how difficult it would be. There were so many books to look at. Where do you begin? The word materias in Spanish means “theme” or “subject matter,” but it also simply means “matter;” that was a way to start for me. Of course I’ve been thinking about how matter and subject matter are inextricably connected.  That’s why I think to speak of the work in strictly formal terms would be convenient, but reductive for me.

This issue has come up a lot in conversations I’ve had with artists recently: I think people work with a set of ideas or concerns, and if we’re lucky, they manifest in multiple ways. It makes me think about how you mentioned that to talk about an artwork simply as its form is not enough. It’s bigger than that.

Yes, but form is an experience, the thing we can apprehend at first. I value it, of course. It’s a sensuous way of knowing, but in the case of my work, it’s not just that, because while you can touch it—sometimes, but not always—it’s a haptic way of knowing, too. All of those things are important. The project that I worked on in Mexico brought many of those issues to the fore. Generally, when I make artists’ books, I make one every two years, but for this project, I made 5 new books.

Is there a reason these take such a long time?

Well, they are labor intensive, although the topic of labor is not the central subject of my work. It just takes a long time to come up with a good idea for a book. Sometimes an idea is system-based, where something happens from page to page, but sometimes a book evolves without a prescribed sequence or narrative where each page is its own world. For the show in Mexico, I made books that did both. The books [in the library] that attracted me were ones that dealt with the natural sciences. Calling [the subject of] these books the natural sciences is weird to me because there is also an ideology in the way people thought through—and still do—the ordering and classification of knowledge. Those questions have always been fascinating to me, how something gets named and how that name stays. Of the hundreds of books in the library, the majority are religious, but I wasn’t interested in them even though they raised interesting and complicated questions about the history of colonialism in Mexico, and the space where the library is housed is an ex-convent with 6-foot-wide walls, which means people suffered to build this beautiful space. That’s interesting to me. I try to think about these themes—these materias—but my work is not denunciatory, so in some ways [working with those themes] felt like an obligation rather than what the work needed to be…

Time is an interesting subject for me. I know that labor is part of the work and labor and time are connected, but I’m interested in approaching that observation by asking how is time made visible, and how is language made into a material. I’m interested in how things come together and fall apart, and come together again, in potentially unexpected and complex ways.

Classification and Its Consequences: The Case of "Fiber Art"
By: Elissa Auther
American Art, Vol. 16, No. 3 (Autumn, 2002), pp. 2-9
University of Chicago Press on Behalf of the Smithsonian Institution