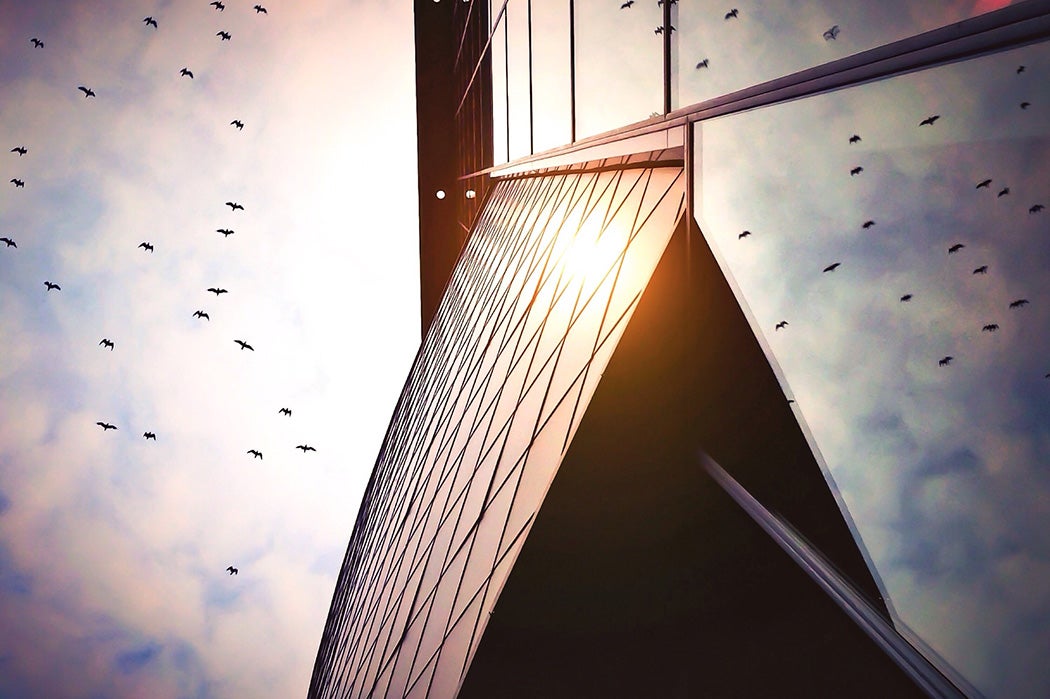 For millions of years, birds have migrated north in the spring and south in the fall. For a tiny proportion of that time, urban conglomerations like Toronto, Chicago, and New York City have straddled these ancient migratory routes, harvesting the lives of birds out of the sky by the millions. The toll in fall is higher than in the spring.

Researchers Yigal Gelb and Nicole Delacretaz reviewed the bird collision data collected from 1997 to 2008 by Project Safe Flight, a citizen science project of NYC Audubon. The data showed over 5,400 collisions, two-thirds of them fatal. Dependent on volunteers numbering in the “tens,” this is only a sampling of the true number of collisions, which may be in the hundreds of millions every year in North America.

“The increasing usage of exterior glass together with the popularity of landscaping likely presents a threat to migrating birds,” write Gelb and Delacretaz. “Of particular concern are buildings that incorporate the characteristics of high-collision sites—large glass exteriors opposite abundant vegetation.”

The researchers found that most collisions happened in daylight. Glass reflects the neighboring vegetation, presumably making birds think they’re simply flying to another tree or bush. Glass buildings next to parks are therefore particularly dangerous for birds.

The block-long Morgan General Mail Facility in New York was particularly important, since more than half of the park across the street was lined with mature trees. The section of the post office across the street from this part of the park had a higher collision count than did the part of the building opposite the the lesser-vegetated section of the park. Ironically, the building’s “windows” were just glass panels covering a concrete wall.

Researchers Kaitlyn L. Parkins, Susan B. Elbin, and Elle Barnes found that light emitted from buildings around New York City’s Bryant Park had a significant relationship to collisions with buildings. This was strongly correlated with the amount of glass in the building façades.

These researchers also tagged dead birds to see how many they could find again after twelve hours (a measure of “carcass persistence”). Only 37 percent of the tagged carcasses were found, again suggesting that surveys of dead birds are probably always undercounts: “our estimate of bird mortality due to collisions has been too conservative.”

Dead birds are swept or hosed away from sidewalks. Feral cats can take dead and stunned birds. A rush of commuters emerging from the subway probably aren’t going to notice a half-ounce bird on the sidewalk. The evidence disappears.

According to Parkins, Elbin, and Barnes, “Bryant Park is brightly lit at night with stadium lights, which may attract or disorient birds during the spring and fall migration. The morning after flying into the park at night, these birds are surrounded by vegetation reflected in the glass buildings surrounding the park.” This is “a trap for migrating birds.”

Parkins et al. conclude, “mitigation of both light and glass are needed to reduce bird collisions in urban areas.” Some of those mitigation efforts include the Lights Out program, bird-friendly design, and legislation. As always, environmental and conservation efforts need supporters. Birds don’t lobby.