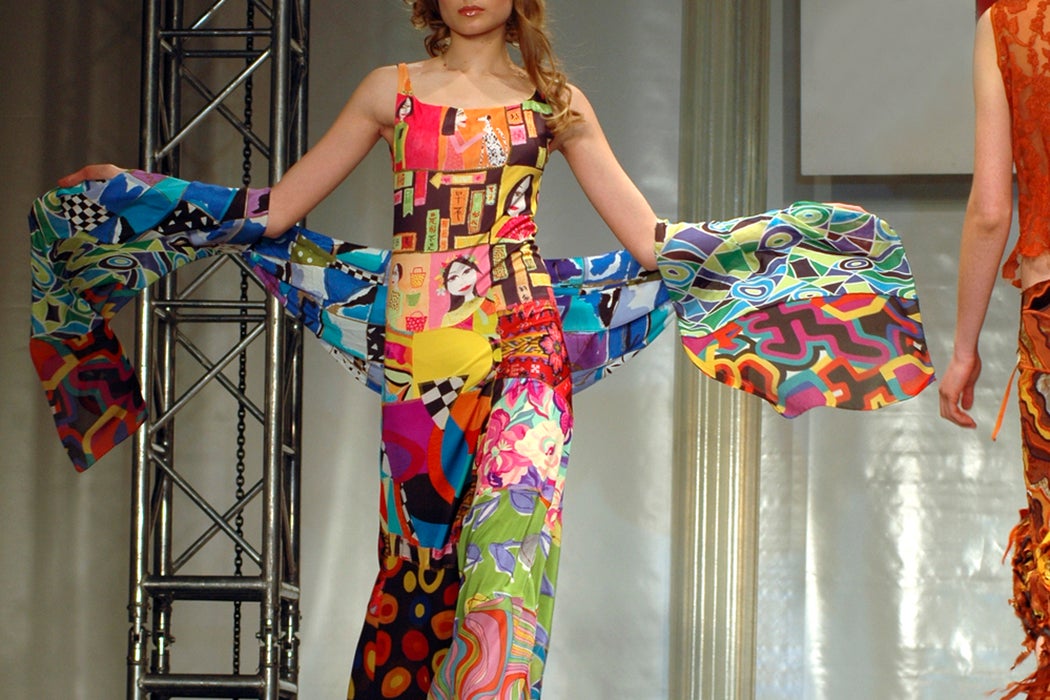 The official “fashion month,” September, has just finished its colorful parade through the world’s style capitals. Clad in pink blazers and royal blue dresses, models stalked the Tom Ford catwalk at the Park Avenue Armory in New York City. Pastels were a consistent theme in London, from Pringle of Scotland’s cornflower-blue dresses to Joseph’s androgynous lilac suits. All of Marc Jacobs’s 56 models sported lively turbans of teal, gold, or black. And Pantone, the recognized authority on color standards across various industries, named the yellow-green shade that evokes the first days of spring as “Greenery,” the 2017 color of the year.

Most of us, mesmerized by the rainbows of the upcoming 2018 collections, dream of the garb we might add to our closets. What we rarely think about is how this lovely rainbow of colors stains the planet’s ecological landscape. Truth is, most of the dyes used today in the fashion industry originate from a concoction of potent chemicals that take a huge toll on the environment and humans.

“Dyes come almost exclusively from petrochemical sources, because natural dyes just don’t work as well,” explains Richard Blackburn, associate professor and head of the sustainable materials research group at the University of Leeds. “[The industry] has been function driven rather than resources driven since the turn of the 20th century.”

Petroleum-derived dye for clothing textiles often contain, and subsequently break down into, toxic ingredients during their manufacturing process, but because they outperform dyes made from natural materials, they remain the fashion industry’s hallmark. Synthetic colorants work faster and deliver consistent hues.

In comparison, using plants or insects for dye production is inefficient, labor-intensive, and unreliable, says Utah State University researcher Jixun Zhan. It requires land for growing plants, the time to grow the crops, and a good harvest, which is easily influenced by pests, disease, and inclement weather. “Natural dyes are [now] hardly used at all,” Blackburn says.

Massive global demand for “fast fashion”—cheap, disposable, trendy-for-a-minute clothing—has led to heavy industry reliance on artificial dyes, the most efficient and the least sustainable textile-coloring method. To keep up with the rapidly changing style, designers must mass manufacture trendy clothes cheaply and swiftly. These synthetic dyeing procedures generate a lot of waste, primarily from loads of water used in the process—a common ratio is one part dye to 30 parts water. The waste should be treated before entering streams and rivers to filter out the chemicals, but in China and India, which are the world’s dyeing hot spots, lax environmental regulation allows industrial contaminants to be released into local waterways, polluting aquatic habitats, ruining farmland, and depriving people of drinkable water.

China’s textile plants alone discharge 660 billion gallons of wastewater into local rivers every year. As the country produces close to 40 percent of all dye chemicals in the world, it is dumping wastewater, laden with known carcinogens such as tributyltin, pentabromodiphenyl ether, and phthalates, into various waterways.

The dye-house workers suffer also, developing various ailments including skin-peeling diseases from handling toxic ingredients used to make synthetic dyes. According to China’s Ministry of Supervision there are more than 1,700 water pollution accidents every year, responsible for approximately 60,000 premature deaths in China.

Blackburn, however, says that the dyeing industry is only partially at fault since the retailers and brands share the bulk of the blame. “They’ve created the fast fashion industry, where people think of products as disposable,” he says. But the planet has a finite amount of resources, so the industry needs new, sustainable dyeing techniques. The old ones are so out of style, they just aren’t chic anymore.

Can the Fashion Leopard Change its Spots?

The process that dominates today’s textile-dyeing industry oozed out from an accidental discovery by William Henry Perkin, a young aspiring chemist enrolled at the Royal College of Science (now part of Imperial College London). During his Easter vacation in 1856, 17-year-old Perkin was experimenting in his home laboratory attempting to artificially prepare the alkaloid quinine. As he tried mixing this and that, his concoctions yielded “dirty, slimy precipitates,” which he considered “rubbish.” Perkin was about to throw the undesired substance away when he instinctively decided to give it a closer look. This led him to isolate the first artificial dye ever produced from coal tar—the aniline purple or mauveine shade—recognizable in the soft purple color mauve. The dye worked well on silk, so other shades eventually followed, creating the synthetic color palette used today.

But this coloring paradigm is due for a makeover. The cosmetics and food industry is already shifting toward using natural colorants, and now eco-minded scientists and entrepreneurs are making progress in “greening” the fashion industry, too. Blackburn, who got into the field of sustainable materials in the early 2000s, applied 15 years of his sustainability research to United Kingdom–based Keracol Limited, a company working on producing colorants derived from various natural elements. Other groups are also working on mining pigments from novel natural sources, such as bacteria. Unlike with plants, which are affected by weather, pests, and other factors, microbial production of natural dyes is reproducible, and easy to scale up and turn into an industrial operation.

The Bacterial Bounty of Colors

Certain bacterial strains are capable of producing colorful pigments as a result of their basic normal metabolic processes: They feed on sugar and they produce the pigment. Pseudomonas aeruginosa, for example, has been making green pigment for millennia, with a shade similar to Pantone’s 2017 color Greenery. Other bacteria, like many strains in the genus Chlorobium, are themselves green in color because of their ability to use photosynthesis. Perfecting the process of using P. aeruginosa in textile dyes may take a while because the bacteria can cause infections in humans, but it still may prove to be a healthier replacement for skin-peeling toxins of the synthetic dyes.

Some pioneering research teams have already found success using bacteria to excrete colors. A team of researchers at the Rensselaer Polytechnic Institute coaxed a group of four Escherichia coli strains into working together to produce the red color that gives strawberries their beauty—a natural red anthocyanin pigment. “We feed the bacteria glucose and they do the rest,” says Mattheos Koffas, the Rensselaer professor leading the project. “For the first time, we are able to completely synthesize anthocyanins in a biological system.”

A French biotech company PILI is looking for ways to produce high-performance, sustainable color in textile dyes that can compete with petrochemical dyes in price as well as light-stability and multiple wash-fastness. The company hopes to integrate their product into existing dyeing facilities, and is also collaborating with a global French pen producer, BIC, to commercialize ecological inks and dyes for writing pens. The inspiration for their sustainable pens comes from a theoretical writing device the PILI team designed years ago: feed sugar to bacteria in a pen so they can produce ink at the other end. As long as the bacterial community in the pen stays alive and fed, theoretically, the pen should always work.

Zhan and his group at the Utah State University successfully used E. coli bacteria to produce large yields of a deep-blue hue produced by microbes called indigoidine. In his work, Zhan used genetically modified E. coli bacteria to generate this blue pigment. His team constructed biosynthetic pathways in the bacterium in order to turn them into tiny cell factories able to convert nutrients into the indigoidine hue. At the end, the colorant is purified so there aren’t any bacterial remnants floating around in the dye. “Engineering bacteria for the production of natural pigments is new,” Zhan explains. “But it benefits from the development of synthetic biology and metabolic engineering approaches in the last two decades.”

Researchers say we’re only scratching the tip of the iceberg in the microbial kaleidoscopic talents. Various other species can also generate different hues. Xanthomonadins produce yellow. At a certain temperature Serratia marcescens ooze out red. Among the woody plants in the Mediterranean climate of southern Spain, scientists found thriving bacterial communities that exude violet shades.

“Theoretically, any color can be produced by microbes,” states Guillaume Boissonnat, chief technology officer and a cofounder of PILI. “I can think of a microbe species for any color of the visible spectrum—red, violet, green, yellow.” Zhan also believes that with some creative tinkering, microbes are capable of producing a variety of colors.

Will Marc Jacobs’s models flaunt S. marcescens–tinted dresses and E. coli–faded jeans next year? This may be a bit too soon, but watch out. The motley microbes are slowly crawling toward the catwalk’s limelight. One spring, they might finally make their fashionable debut, forever changing our colors and styles.