The conceptual artist Sophie Calle creates art that urges us to ask, is attention the same as love? 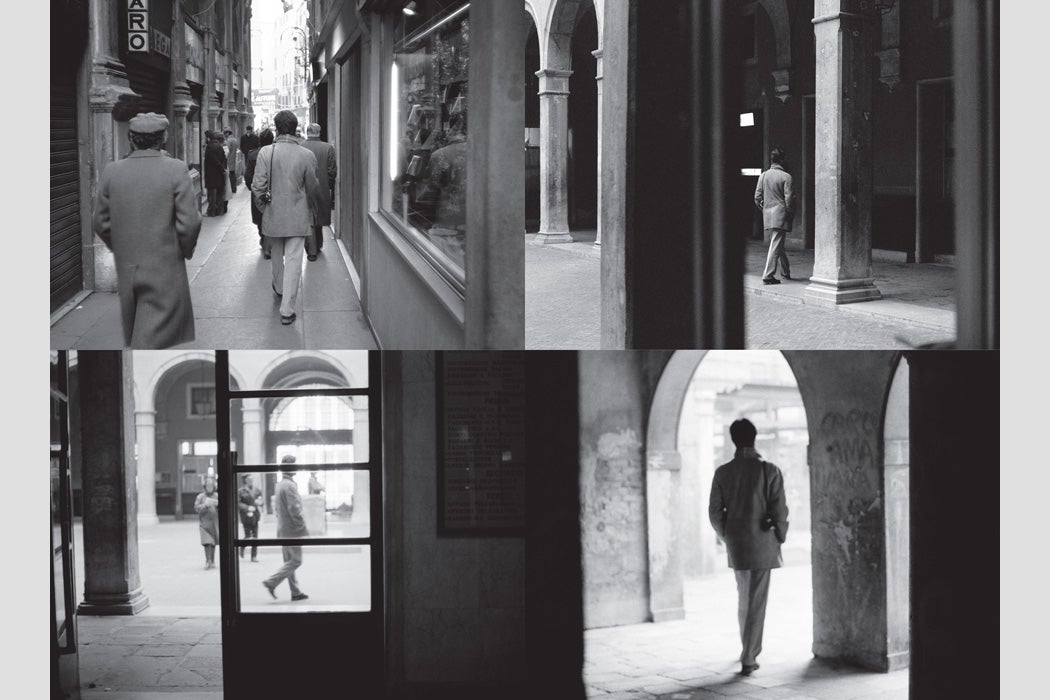 The line between love and obsession can be blurry, as evidenced by the hit Netflix show You, which is about a stalker who uses a woman’s social media accounts to surveil and manipulate her. The simplicity of watching someone go through the motions of their day may seem romantic or creepy, depending on context, but to turn this ordinary act into art is a job for the artist. The art of following and seduction were significant practices among artists of the 1960s and 1970s, especially the conceptual artist Sophie Calle.

Visual arts scholar Janet Hand analyzes the way documentation and seduction work in art pieces like Sophie Calle’s Suite vénitienne. Suite vénitienne is a series of photographs in which Calle follows a stranger all the way to Venice. After meeting this man by chance at a party and finding out he is travelling to Venice, she decides to photograph and take notes on his journey there.

Calle is not necessarily in love with this man, or even obsessed, but she certainly tests the limits of surveillance.

Hand writes, “In Suite vénitienne the attachment to a ‘getting to know’ someone is a ‘micro’ form of kinship in a public and anonymous setting, acted out through the conventions of a chase with all its connotations of love and danger.” Calle is not necessarily in love with this man, or even obsessed, but she certainly tests the limits of surveillance. It’s an early practice of the art of “following,” in the age before social media even existed.

The quotidian nature of her photography is what makes the art feel intimate. Art historian Giuseppe Merlino writes, “The intimacies she recounts, with texts and images, are not the results of encounters, attractions, or affinities, but of an accumulation of observed details from the programmed obsessiveness of a collector-voyeur.” For example, in another piece, The hotel (1981), Calle took up a job as a chambermaid in a Parisian hotel where she examined and photographed guests’ belongings.

Calle’s documentation of love and testing the limits of intimacy is evident in her later piece, Take care of yourself. After receiving a break-up email from her then lover, Calle recycles her pain and heartbreak into an art piece by sending a copy of this email to 104 women of various professions. It is their job to interpret and analyze the email according to their skills—a fortune teller, a jurist, chess player, and ballerina all interpret the letter in their own ways. Merlino notes, “[They] split apart the personality of the lover and the dominion of the abandoned party into a certain number of described and recognizable ‘types.’ Thus they make him banal and deconsecrate him, and the rancor begins to give way.”

In Calle’s work, love and voyeurism intermingle, depicted in black and white imagery with the point of interest far enough into the distance that the love transforms into voyeurism, even obsession. Love looks like a row of shoes and suits placed neatly on hangers of someone we don’t know. Perhaps more intimately, it’s a photograph of the contents of a guest’s trash bin. To know a person completely is to watch how they live, or at least pretend to be interested in how they live.