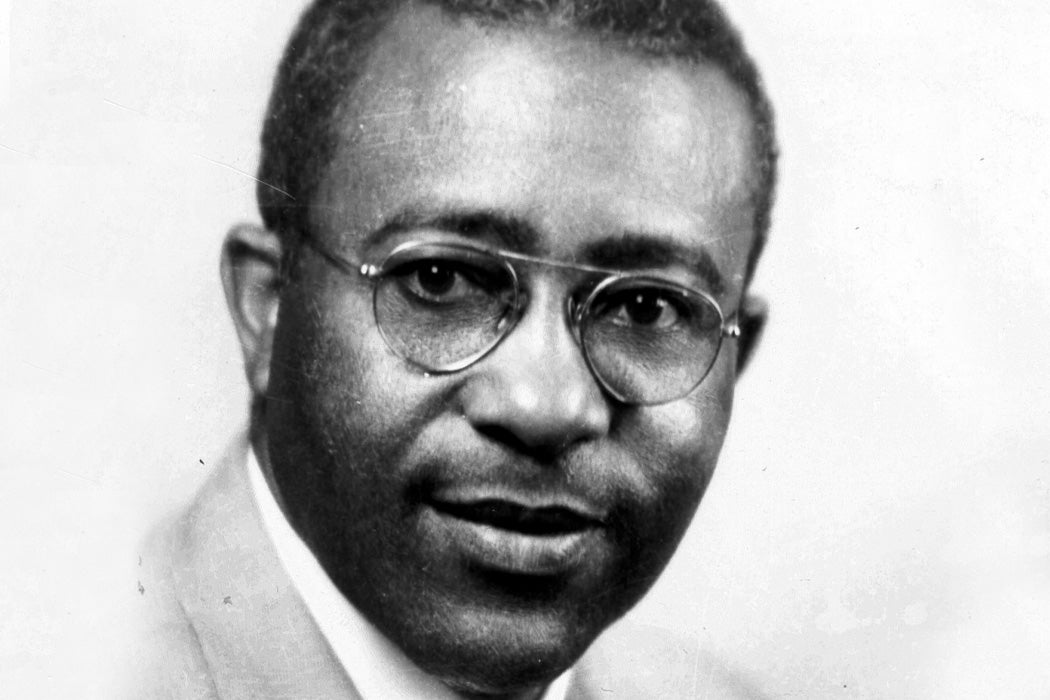 Punishments came on rainy days, reported Thomas Brown from South Carolina. In order to avoid losing the labor during fine weather, his enslaver would, with calculated efficiency, “… keep an account of all the things we did, and on rainy days, we were punished.”

A modern reader might imagine that a rainy day could be a respite from toil, but as this testimony demonstrates, those days might just as well augur terror. It was some 70 years after emancipation when Brown shared his story but he was determined to make his witness still matter. In his interview he goes on to detail the kinds of torture and abuse his body was subjected to including beatings from a board designed to raise blisters that would be burst through whipping and finally salted to extend his suffering.

As this kind of testimony demonstrates, the wounds might be horrifying but it was the system’s ways of impeding healing both literal and figurative that Brown felt needed to be told and, somehow, overcome.

The astounding collection of life stories made available in the “Opinions Regarding Slavery” collection held at Southern University and A&M College in Baton Rouge, Louisiana, and which now can be seen via JSTOR’s Open Community Collections, allows for surprises and revelations as well as confirming and enriching our knowledge of better known aspects of life under slavery. It veers from pedestrian details about things such as lack of shoes to sharp memories of torture, accounts of Ku Klux Klan activity and, almost always, the pain of family separation. These 229 interviews were conducted with elderly survivors of slavery, and consistently demonstrate that the worst memory of all was having a family torn apart. As Lewis Parker of South Carolina noted, sadly: “I will never git [sic] over it.” Those wounds never did heal.

Historian and archivist John B. Cade published some of the narratives in 1935 in the Journal of Negro History.

As you might expect, these narratives reveal much about enslaved experiences and the process of 20th century memory. Significantly, though, this collection also provides us with a glimpse into notions of education, the history of Black Studies, the disciplinary development of Folklore and anthropology studies and the first steps into understanding enslaved narratives as the astounding storytelling and fundamentally literary testimony that they also are.

What you see here is classwork and, indeed, you can see teacher’s notes in red pen on most of the assignments. 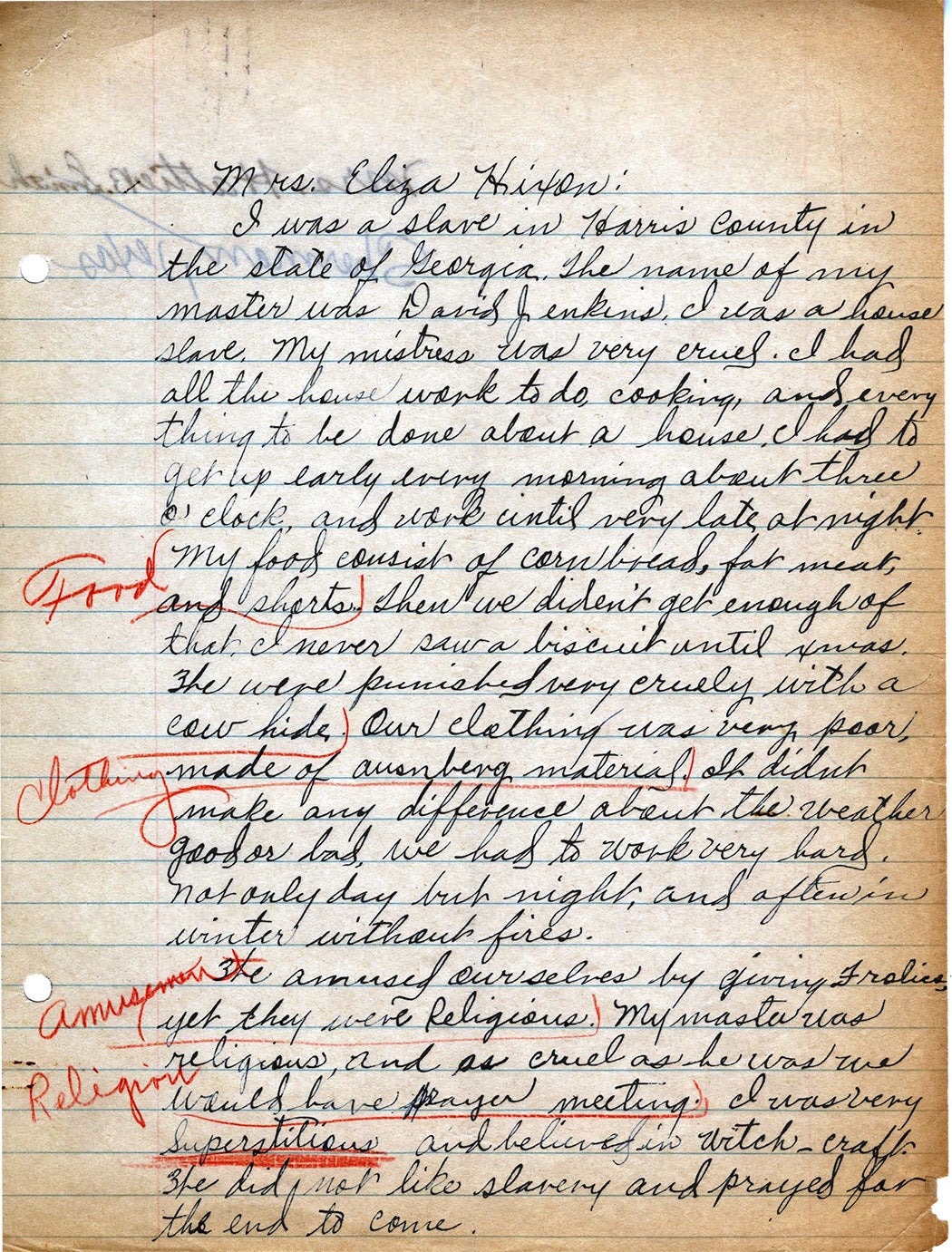 John Brother Cade was a young academic when he first started assigning his history students to interview former slaves between 1929 and 1935. This portfolio of classwork, now accessible on JSTOR, consists of interviews with enslaved people sometimes transcribed with attempts at dialect reproduction, or sometimes with smooth paraphrasing that might elide some of the more forceful points individuals might have been making. (You can listen to or read more about the project in our interview with archivist Angela Proctor.)

One dialogue is transcribed as follows: Student: “I came for a bit of your history.” Lewis Parker of South Carolina replied “History. What’s dat? I doan spech I got none, boy.” But other students chose to avoid the problem of verbal reproduction altogether such as the student who interviewed Judie Martin of Kansas, for instance, and with frustratingly succinct summaries wrote ”Judie liked social and religious activities” and “Judie was sold away from her mother when she was old enough to wash dishes” with few other details or attempts to evoke the emotions that surely must have surrounded these accounts.

Sometimes these interviews take the form of quick questionnaires, with topics ranging from Clothing and Food to Punishments and, with a painfully clumsy query: “Tell of an important happening or funny incident that took place on your master’s plantation.”

Not surprisingly, few individuals seem to have embraced the presumptions of the “funny incident” question although one man, when asked if there was anything he liked about his experience under slavery responded with what might have been some impatience that “I didn’t know anything else so of course I had to find things to like” and another man, Eli Howard of Louisiana, who chose to tell a “funny” tale about how the Yankees marched onto the plantation, burned the cotton crop, and claimed the master’s chickens for themselves, and with this story Howard made sure the victim of the humor was not an enslaved person. 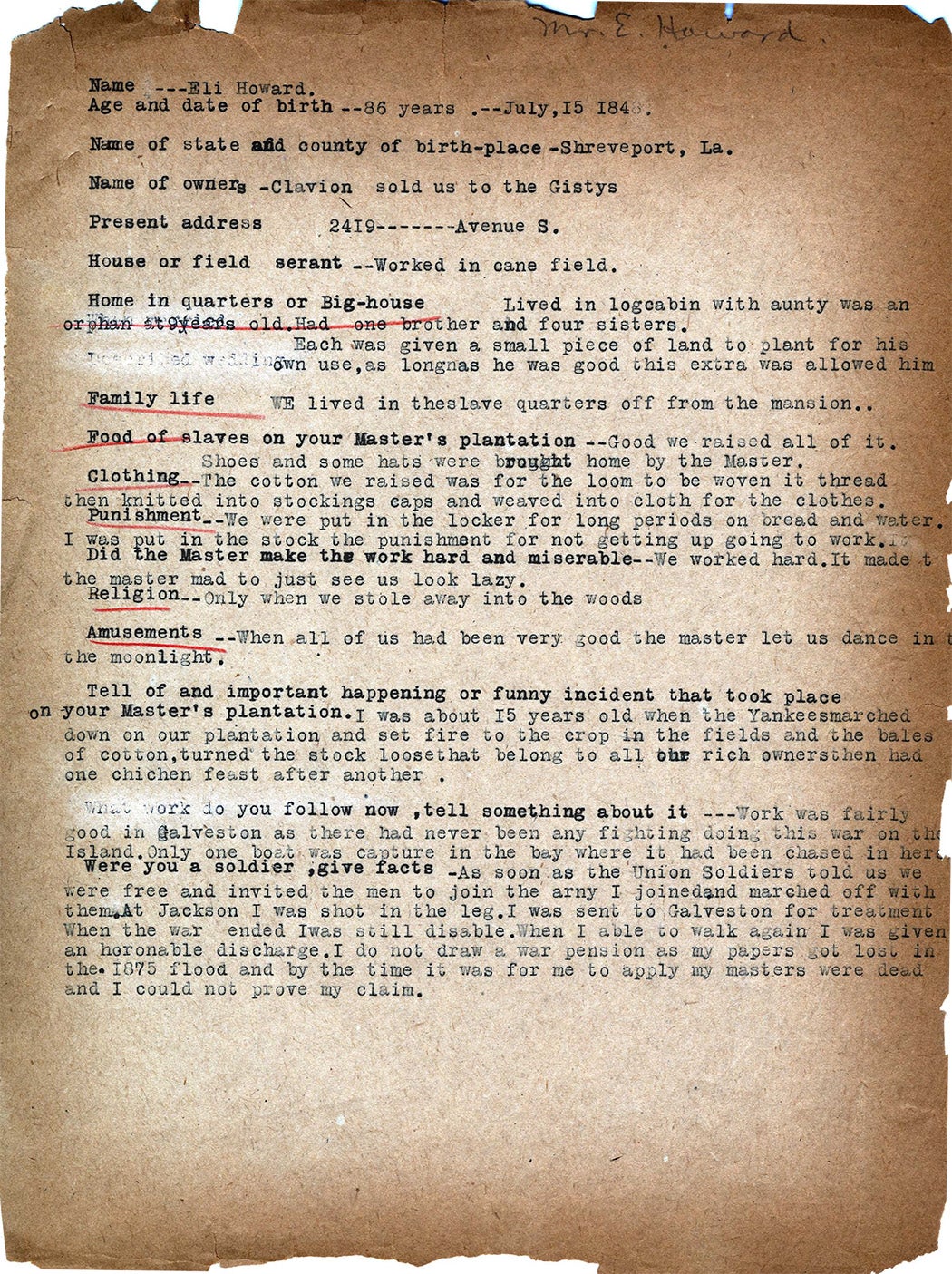 The awkward nature of some of the student questions are apparent in interviews where they were directed to ascertain the overall attitude towards slavery exhibited by their subject. As interview subject James Williams of Maryland put it dryly: “None like it.” 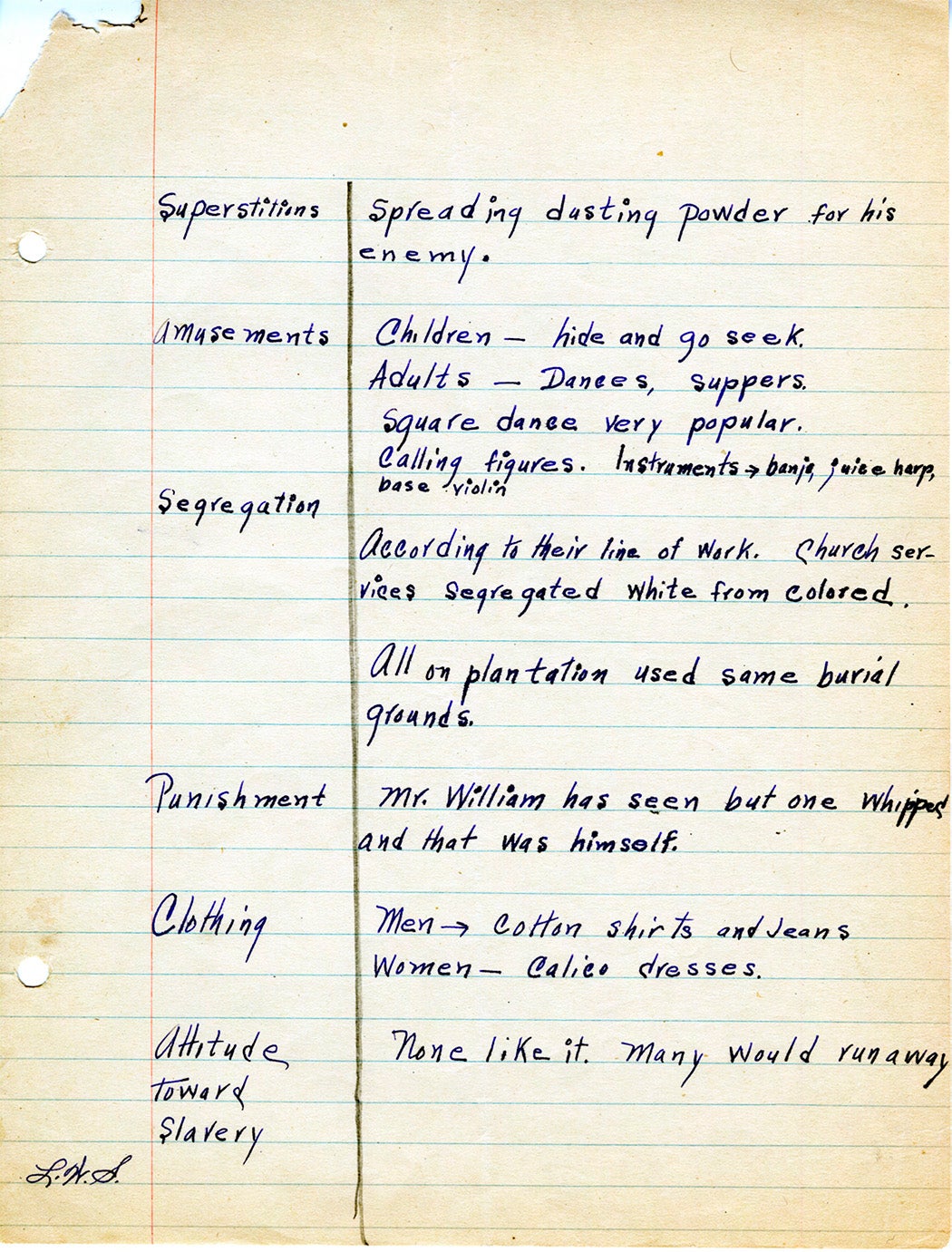 Or perhaps stunned into understatement after her testimony about hunger and overwork, Mary Houston of Arkansas said only: “I did not like Slavery.” 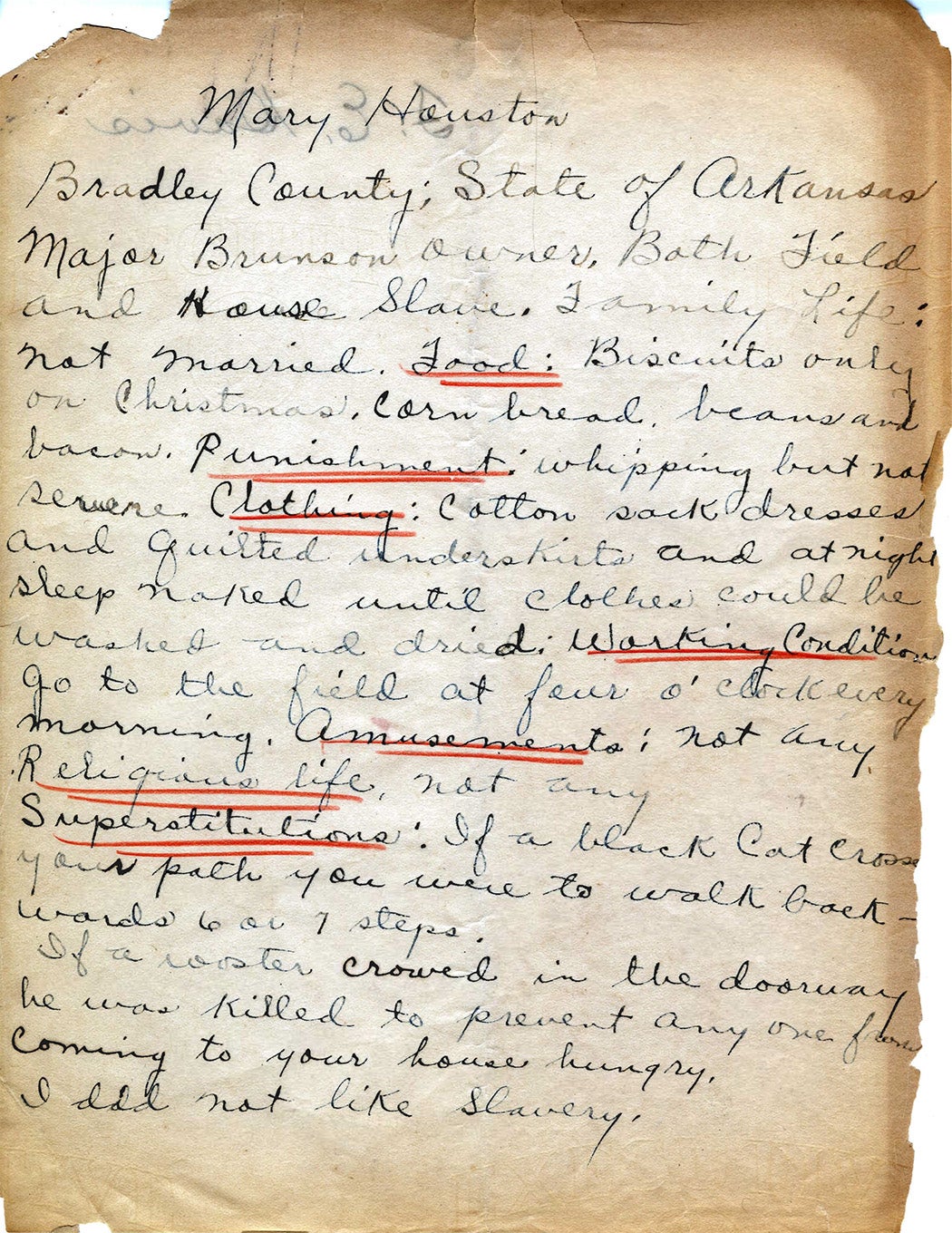 As with the better known trove of interviews with survivors of slavery conducted by the WPA during the 1930s, these student interviews are sometimes rote and sometimes insightful. Unlike the WPA interviews with former slaves, however, which were conducted mostly by white and a few Black adult questioners, these documents have the remarkable characteristic of having been created by Black students. These students, some of whom were evidently teachers or training to be teachers themselves and completing university extension classes with Cade, were not representing any government entity and they certainly didn’t carry with them any gravitas real or imagined as significant authority figures who might need to hear only certain sunny outcomes. Many of the interviewers, for example, indicate that they addressed their elders with respect as “Uncle.” This may have resulted in the fact that there are many more brutal details and complaints evidenced in these interviews than one can see in the WPA narratives which are occasionally warily nostalgic.

How the students obtained the contact details for these individuals they interviewed is a bit mysterious. Were they mailing questions to far-flung relatives or acquaintances? Were they interviewing elderly locals? Were these names of individuals their instructor had provided or were they neighbors and acquaintances? Had Cade conceived this effort as part of the growing academic interest in folklore? Had his graduate training at the University of Chicago led him to develop this pedagogy of engaged fieldwork for these students? What was its relationship, if any to the broader government undertakings of the Works Projects Administration during the 1930s that similarly organized interviews with elderly survivors of slavery? There is much work to be done on the fascinating and vital provenance of this collection and its role in the history of education as well as the history of the life of enslaved people.

Some of these narratives clearly organized around specific questions while others seem to be more creatively assembled. Some responses are almost monosyllabic and others are quite garrulous and chatty. The inconsistency of these interviews highlights the ways in which readers of these narratives must reckon with each personal tragedy and each person’s joys in the terms that people so chose to share.

This collection can remind us, too, of the geographic diversity of chattel slavery in North America. These documents hail from some 17 states as well as from Oklahoma Territory, “Indian Territory” and Canada. And while there is much consistency in the accounts of lives of unrelenting toil, the geographic differences can expand our notions of what life during slavery might have been like, even if one was not a slave.

88 year old Charles Henry Swan, who was always free, for example, has a narrative included in this collection. He was born in Halifax, Nova Scotia but his parents, who had been slaves in American before the American Revolution, later migrated down to Bermuda. He spent his life as a sailor, not a slave. As he put it, “The only master I have ever had was the school master, Henry Thomas.” But in his brief narrative he makes it clear that he was never one to participate in the slave trade. “I have anchored at every known harbor in the world seeking cargo but even went to Africa but true to my word have never been guilty of sailing a slave cargo.” 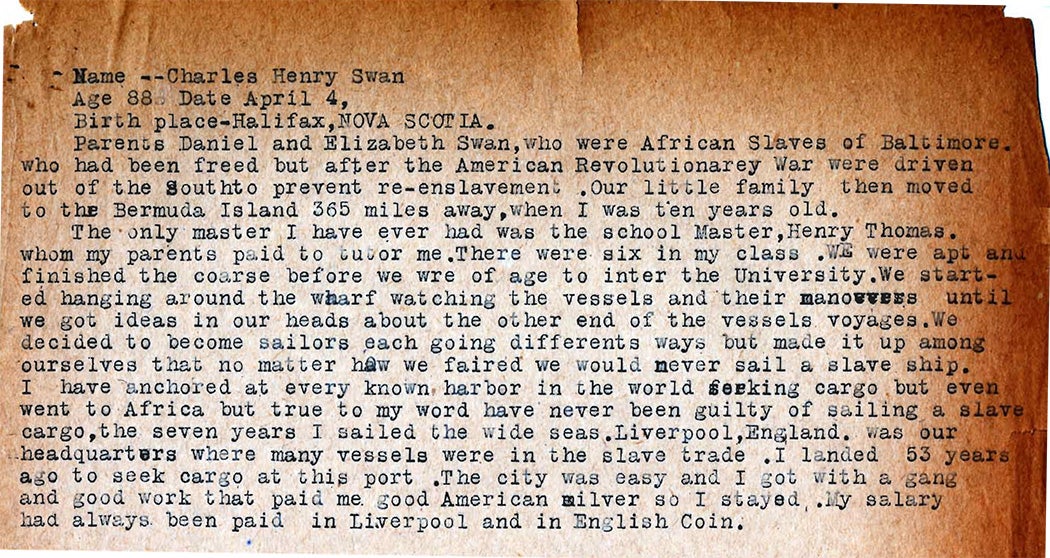 Conversely, William Seals Brown was enslaved in what was then “Indian territory” (see image here) aligns with the tone and stories of many people who survived enslavement in more established states inasmuch as he discusses the work and lack of shoes, his comparative good fortune in being a “house boy” etc. But despite being enslaved by a speculator and presumably thus having many people of all sorts move in and out of this plantation labor camp orbit, he asserted that he and his family “Had nothing to do with strangers, even the new slaves.” They were kept in isolation from the world. And yet some would sneak off to try to learn to read from the Bible even though if “they caught one trying [to] write they would cut his thumb off.” Other particulars of his experience come through such as when he discusses his half Native American father who tries to escape and is shot and when he briefly mentions how people who tried, usually unsuccessfully, to flee to Mexico. 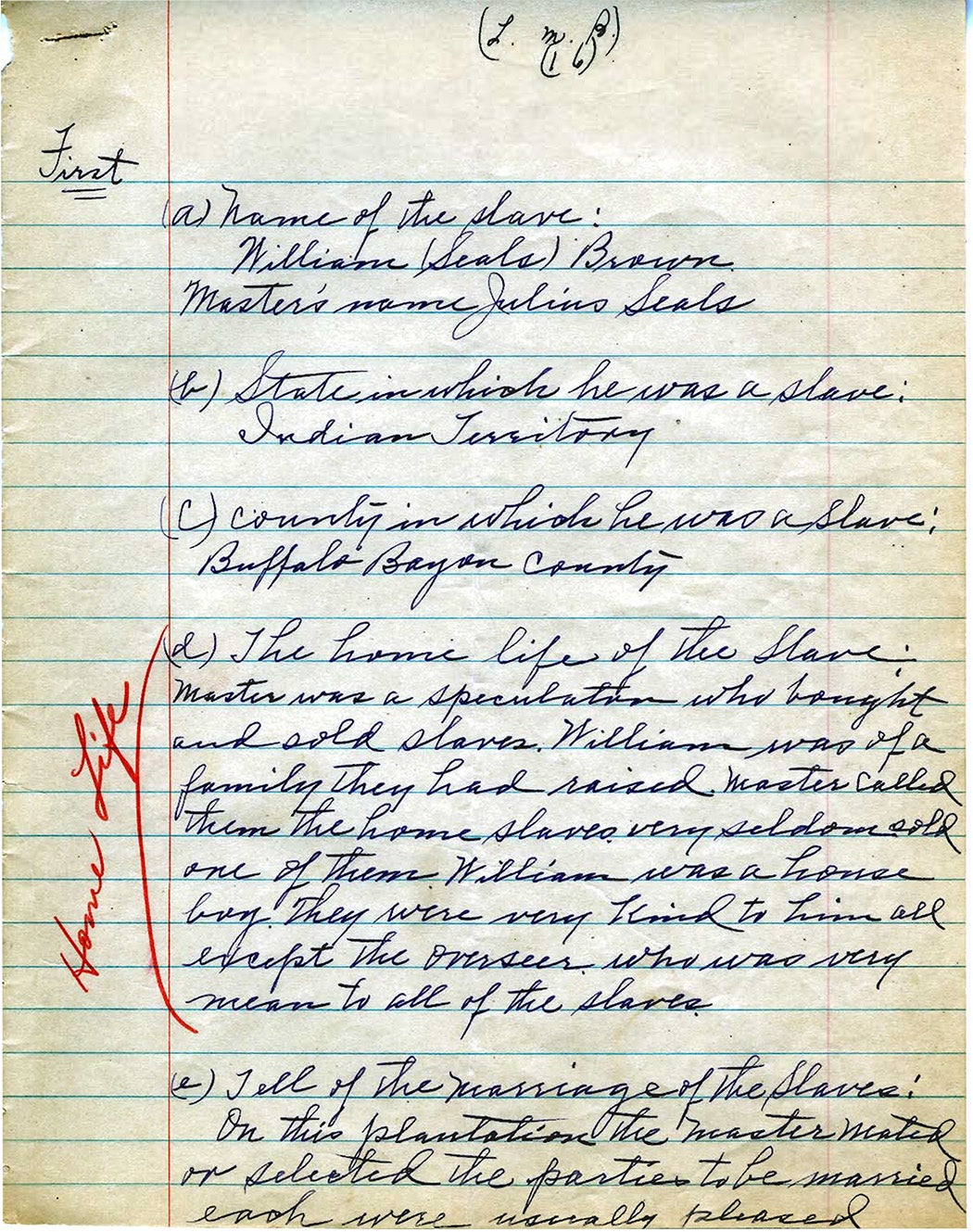 Some of these stories are harrowing for their precision and delicacy. Jourden Luper of South Carolina, for example, tells of torture and starvation, of abuse and fear but his most fearsome memory isn’t even his own.

“When my mother was sold, she gathered up her little belongings. She reached down to take me with her hand and my old White mistress Mrs. Rebecca Clayton said, to my mother just leave that boy alone. I want him to wait on me.”

Luper couldn’t himself recall that moment, he was too young. But in recounting his grandmother’s story of that parting Luper ensured that his mother’s outstretched hand of love and longing could be part of the story. In the word of Toni Morrison’s Beloved, it was “a story to pass on.”

The breadth of these 229 interviews is stunning. Having them now accessible for further study, exploration, and perhaps transcription (most of them are written in relatively clear student handwriting while a few of them are typed) is invaluable for all sorts of reasons discussed here. Most importantly, the fact that these interviews were conducted by students, often on yellow lined paper with red pen teacher comments that might be visually quite familiar to students today suggests that these voices might be heard loud and clear for a new generation.

Editor’s Note: We’re grateful to Angela Proctor, Head University Archivist at the John B. Cade Library at Southern University, for her help with this article. In addition to the 1935, Opinions Regarding Slavery collection, the library holds John B. Cade’s papers as well as the Louisiana Works Progress Administration (WPA) collection of slave narratives. You can read a transcript of our interview with Angela Proctor here.

Angela Proctor on the “Opinions Regarding Slavery: Slave Narratives” Collection