The most radical faction of the French Revolution was hated by everyone in the United States from reactionaries to abolitionists. 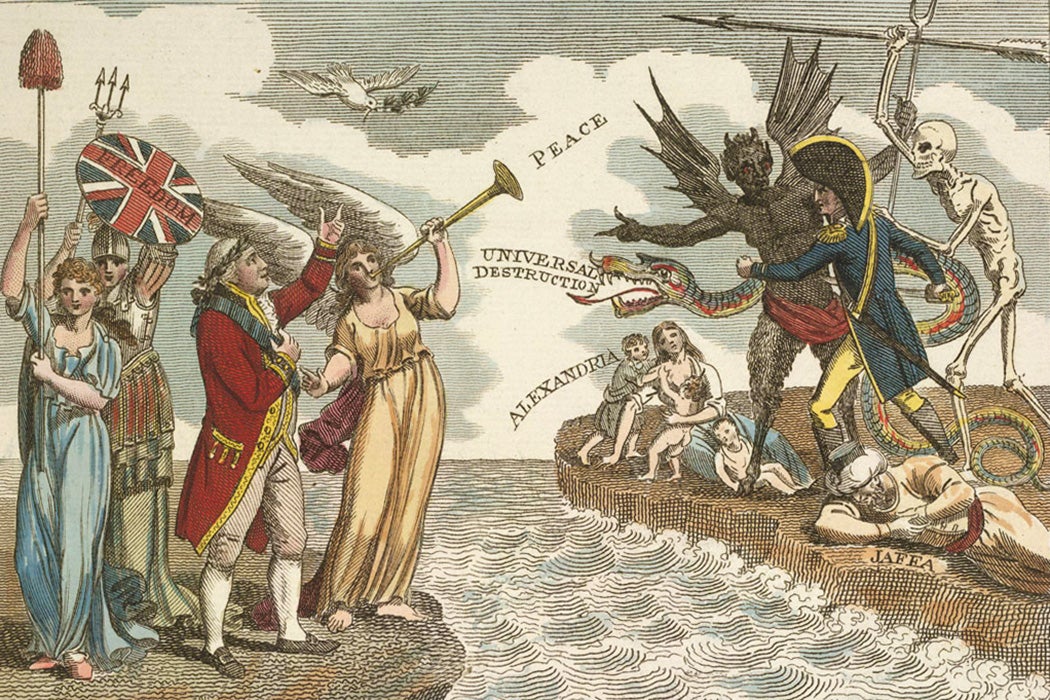 The beginning of the French Revolution in 1789 excited some Americans, who saw it as a continuation of their own revolutionary tradition. Others, including John Adams, joined conservative European counterparts like Edmund Burke in sounding alarms soon after it started. Of course, news of the September Massacres in 1792—the beginning of the Reign of Terror—eventually turned some of those early supporters into fierce opponents.

As historian Rachel Hope Cleves details, English-speaking counterrevolutionaries on both sides of the Atlantic became anti-Jacobins together, influencing each other in their opposition to revolutionary France. But not only that: They also attacked domestic dissenters—revolutionary, radical, or merely reformist—as Jacobins.

“Jacobin” comes from the Club des Jacobins, which met at a former Dominican convent dedicated to St. Jacques (Jacobinus in medieval Latin). Formally the Society of the Jacobins, Friends of Freedom and Equality, this was the most influential of revolutionary France’s political clubs, with such famous figures as Robespierre and Marat among its members.

“Throughout the 1790s, accounts of mob cannibalism served as a generalized element of trans-Atlantic anti-Jacobin discourse.”

Because Jacobinism “never truly manifested itself in the United States,” Cleves argues, “the oppositional rhetoric it generated, known as anti-Jacobinism, may appear to be a similarly foreign invention.” On the contrary: “American anti-Jacobinism was very genuine.” However much of it was fertilized by British anti-Jacobinism (and vice versa), it was home grown, and persistent. It was also graphic: “throughout the 1790s, accounts of mob cannibalism served as a generalized element of trans-Atlantic anti-Jacobin discourse.”

Among several examples of this bloodthirsty rhetoric, Cleves quotes prominent Federalist Theodore Dwight describing victims of the Terror “sacrificed to the infernal fury of cannibal fishwomen.” William Cobbett, the English pamphleteer who lived in the United States from 1792 to 1800, was so known for his fervid descriptions of supposed French cannibalism that rival Philadelphia papers even mocked him for it.

Anti-Jacobinism “suffused American political culture from the early 1790s to the Civil War,” even as “Jacobinism” shifted in meaning. It became an all-purpose label for violence and tyranny. During the War of 1812, President James Madison was deemed “Jacobin” by opponents who considered him “tyrannical.” The congressional Gag Rules of the 1830s and 1840s, which limited debate on slavery, were called “Jacobin” because they stifled democratic dissent.

As Cleves notes, anti-Jacobin language also “suffused humanitarian discourse for decades.” It became a tool of abolitionists. As early as 1796, French violence was being connected to slaveholder violence. In 1815, abolitionist Jarvis Brewster wrote that slavery was “a system of tyranny and persecution more horrible perhaps” than Robespierre’s Terror. Abolitionists attacked by a mob in Boston in 1835 said that the “Jacobins of the present day” were the rich whose power was built on the trade in humans. Free-born Black abolitionist William Cooper Nell likened the Fugitive Slave Law (1850) and the Dred Scott decision (1857) to the Reign of Terror.

Of all Cleves’s examples, the Irish-born Antiguan plantation owner–turned–Philadelphia abolitionist Thomas Branagan may represent this multiplicity best. Rejecting slavery after a religious conversion in the 1790s, he combined his opposition to revolutionary violence in France with his fierce antislavery views. It was a reactionary stance transformed into humanitarianism.